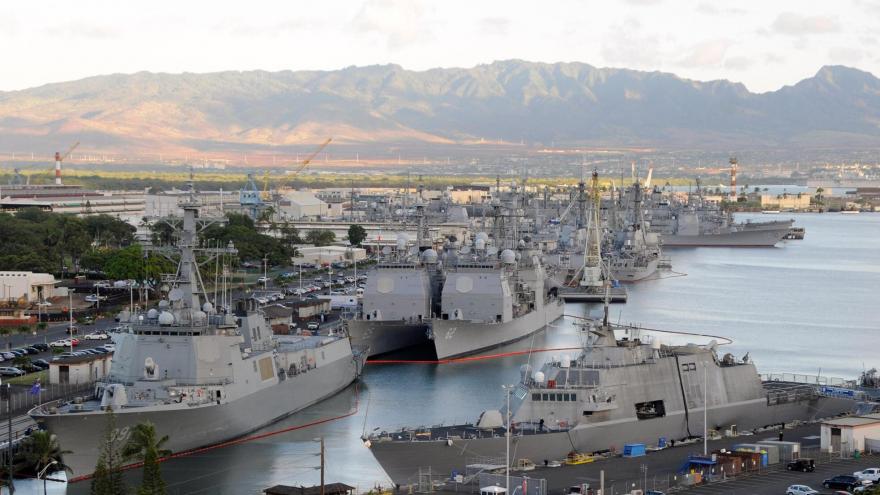 (CNN) -- The US Navy has been granted a permit to discharge up to five million gallons of treated water a day from its Red Hill Bulk Fuel Storage facility after that water was contaminated by a petroleum leak that sickened military families and children in Hawaii.

Statements from the Hawaii Department of Health and the Navy on Friday said the permit will allow the removal of contamination from the freshwater aquifer under the storage facility.

The fuel facility sits 100 feet above the Red Hill aquifer, which supplies drinking water to Joint Base Pearl Harbor-Hickam and other parts of Hawaii. Nearly 1 million people on Oahu rely on it for water, according to the Hawaii Board of Water Supply.

On November 28, the Navy shut down its Red Hill well after reports of people on base suffering nausea, vomiting, diarrhea, headaches and skin-related problems.

Testing revealed petroleum hydrocarbons and vapors in the water, the Navy said. US Pacific Fleet Deputy Commander Rear Adm. Blake Converse later confirmed a petroleum leak was the cause.

"When pumping begins, up to 5 million gallons a day of water will be pumped from the Red Hill Shaft," the Navy said in an email to CNN.

"Water will pass through a granular activated carbon (GAC) filtration system, where it will be closely monitored and tested to ensure it does not pose a threat to human health or the environment, before discharging into Halawa Stream."

The permit was approved by the Interagency Drinking Water Systems Team (IDWST), a coalition of the Hawaii Department of Health, the US Environmental Protection Agency, Hawaii Department of Health, US Navy, and US Army. It requires that water be tested at "each step of the treatment process," and that the operation stop if levels are not in accordance with DOH's requirements.

IDWST said the plan will reduce contamination, protect plants and wildlife and set the groundwork to understand how the groundwater was contaminated.

In early December, the Navy discovered contamination at the Red Hill Shaft. Honolulu's Board of Water Supply (BWS) later shut down the Halawa Shaft, Oahu's largest water source, after the Navy said it had found "a likely source of the contamination."

CNN reached out to the governor's office regarding the permit but has not received a response.