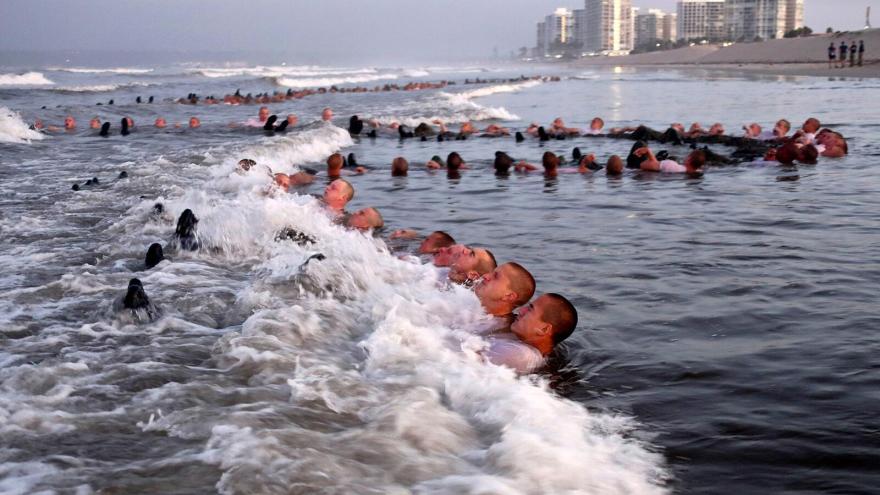 The Navy is investigation the grueling SEALs selection course after the death of a sailor earlier this year. SEAL candidates here participate in "surf immersion" at the Naval Special Warfare Center in Coronado, California, on May 4, 2020.

(CNN) -- The Navy ordered an investigation into the grueling SEALs selection course, according to three Navy officials, after the death of a sailor earlier this year drew increased scrutiny of the policies, staff preparation, and safety measures in place around one of the military's most elite units.

The new investigation was initiated by a letter from outgoing Vice Chief of Naval Operations Adm. William Lescher, one of the officials said. The letter directed Naval Education and Training Command to examine Naval Special Warfare oversight of the most difficult and punishing elements of the SEALs selection course, another of the officials said, including a look at the use of performance enhancing drugs within basic training school to complete the course.

The New York Times first reported the opening of a broad investigation into the SEALs selection course.

It is a broader look at the circumstances around the death of Seaman Kyle Mullen in February. Mullen completed "Hell Week" during the Navy's Basic Underwater Demolition SEAL class, but he began suffering symptoms several hours after the course, the Navy said at the time. Hell Week is a brutal part of the first phase of the SEAL selection course, consisting of five days in which trainees are constantly cold, hungry, sleep-deprived and wet.

After the conclusion of Hell Week, Mullen suffered symptoms and was taken to a California hospital, where he later died. At the time, the Navy said that neither Mullen nor another injured sailor were "actively" training when they fell ill.

A separate, but more narrow Line of Duty investigation into Mullen's death is being finalized and reviewed, a Navy spokesperson said. Upon completion, it will be shared with his family and released.

While the Navy could not provide deadlines for the investigations' completion, the spokesperson said that the service is committed to "transparency" and final reports that are "thorough, accurate, [and] impartial."