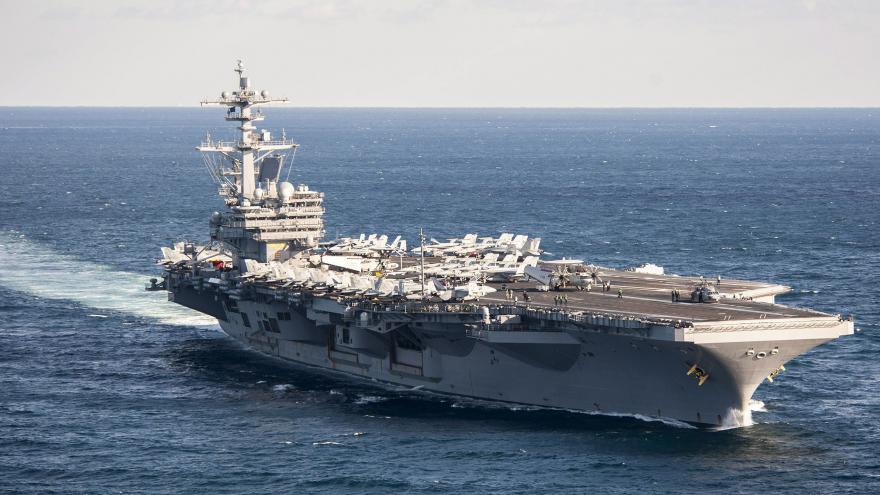 (CNN) -- The Navy has opened an investigation into the command climate and culture on board an aircraft carrier following the deaths of seven sailors in the last 12 months, including four by suicide, according to the Navy.

The investigation will also look at any connections or links between the deaths, which comes after three of the sailors died by apparent suicide in one week earlier this month.

The USS George Washington has been in port in Newport News, Virginia, undergoing refueling and overhaul. In the past 12 months, there were seven deaths among the crew.

The four most recent deaths, including three this month, were either confirmed or apparent suicides, Capt. Sarah Self-Kyler, a spokeswoman for US Fleet Forces Command, told CNN.

Two of the deaths in May and October 2021 have been determined not to have been by suicide. The cause of death another sailor in July was undetermined, Self-Kyler said.

CNN previously reported that the Navy was investigating the deaths of three sailors from the carrier. Two sailors were found deceased at off-base locations on April 9 and 10. A third sailor was found unresponsive on board the ship on April 15 and died at the hospital. The Navy determined that those three deaths were apparent suicides, though a final cause remains under investigation, Self-Kyler said.

Investigators confirmed that a death last December was a suicide.

There were also three more deaths from the ship in late-2019 and 2020. Two of those deaths remain under investigation, Self-Kyler said, but the other death in December 2020 is also an apparent suicide.

Though based on the West coast, the USS George Washington has been at Newport News shipyard since 2017 going through its Refueling and Complex Overhaul (RCOH), a process carried out halfway through the life of a carrier that replenishes its nuclear fuel and updates its systems. The process typically lasts four years, but it has been delayed multiple times by the pandemic and other setbacks.

As of April 1, there had been 15 suicides this year among active-duty Navy members. The three within one week earlier this month brings the total to 18 suicides.

Defense Secretary Lloyd Austin has made addressing the issue of military suicides a priority. Last month, Austin established the Suicide Prevention and Response Independent Review Committee, which will look at Defense Department efforts to deal with suicides among troops.

The committee is set to begin its work in May and start visiting bases and military installations later this summer. An initial report with a preliminary set of recommendations is due by early next year.

"One death by suicide is one too many," Austin wrote in the memo announcing the independent review committee. "And suicide rates among our Service members are still too high."

"We certainly want to look at things like the command climate and culture and mission and op-tempo, the tempo at which we're pushing people. All those things are stressors in life. Some of them could contribute to the problem of suicides. But again it's a very individual thing," Kirby said at a press briefing Thursday.

"Each death is tragic in its own right, regardless of how. And we, our thoughts and prayers continue to go out to the families, and frankly the shipmates."

In 2020, 580 service members committed suicide, according to the Defense Department. The suicide rate increased in all the military branches over the previous five years.

CORRECTION: This story has been updated to correctly state the typical timeframe of the Refueling and Complex Overhaul process.