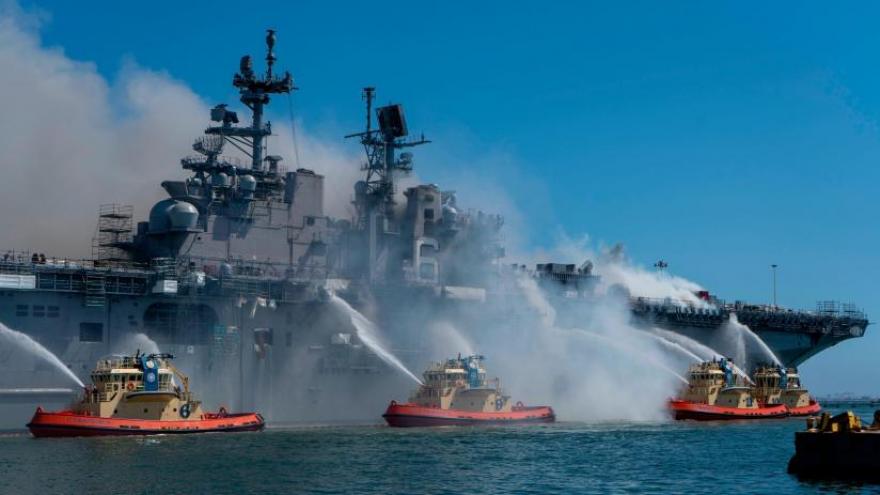 The US Navy has charged a sailor in connection with the 2020 fire that destroyed the USS Bonhomme Richard amphibious warship while it was in port in San Diego, a Navy spokesperson said July 29.

(CNN) -- The US Navy has charged a sailor in connection with the 2020 fire that destroyed the USS Bonhomme Richard amphibious warship while it was in port in San Diego, a Navy spokesperson said Thursday.

The charges are based on evidence found during the criminal investigation into the fire, Navy spokesperson Cmdr. Sean Robertson said in a statement, which is "sufficient to direct a preliminary hearing in accordance with due process under the military justice system."

The sailor, whom the Navy has not publicly identified, was a member of the Bonhomme Richard's crew at the time, Robertson added.

Vice Adm. Steve Koehler, commander of the 3rd Fleet, is considering court-martial charges and ordered a preliminary hearing that will make recommendations under the Uniform Code of Military Justice for further proceedings "including whether or not there is probable cause to believe an offense has been committed and to offer a recommendation as to the disposition of the case," Thursday's statement said.

CNN previously reported that a sailor was being questioned over the possibility that they may have intentionally set a fire.

The blaze aboard the billion-dollar Navy warship was extinguished after raging for four days. The ship had been docked in San Diego for maintenance when the fire broke out. Sailors were beginning to fight the fire when a subsequent explosion caused the vessel to be evacuated.

The Bonhomme Richard was designed to support Marine Corps operations, but it was de-commissioned and scrapped after a damage assessment found that restoring the ship would cost billions of dollars.

Navy officials said that restoring the ship would cost $2.5 billion to $3.2 billion and take five to seven years, saying that some 60% of the vessel would need to be replaced.

"Following an extensive material assessment in which various courses of action were considered and evaluated, we came to the conclusion that it is not fiscally responsible to restore her," then-Secretary of the Navy Kenneth Braithwaite said in a statement last year.

The Navy also looked at how much it would cost to convert what remains of the Bonhomme Richard into another type of vessel, such as a hospital ship, but such a conversion could cost more than $1 billion -- more than building a brand-new similar ship.