Navajo Nation vaccinates more than half of its adult population, outpacing US national rate 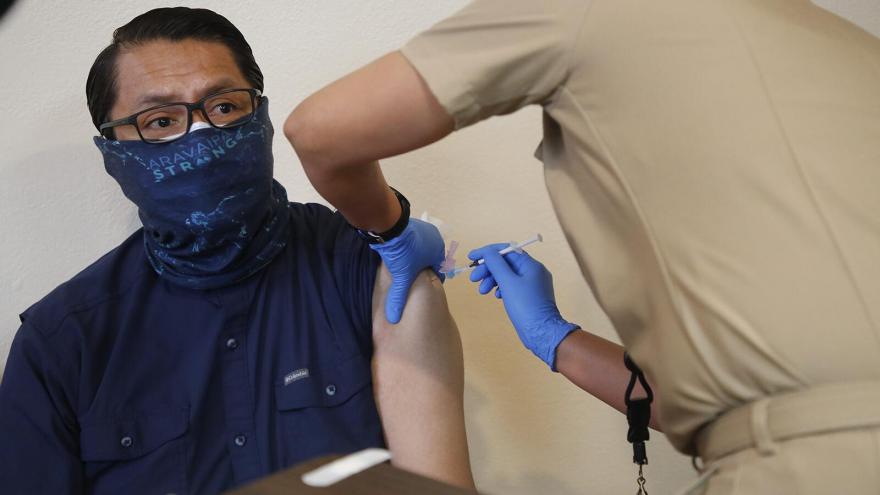 The Navajo Nation has reported more than half of its adult members have been vaccinated, outpacing the vaccination rate for the rest of the US .Navajo Nation President Jonathan Nez is seen receiving the Pfizer-BioNTech COVID-19 vaccine on Dec. 31, 2020.

(CNN) -- As Covid-19 vaccinations have become more widely available across the US, the Navajo Nation has reported more than half of its adult members have been vaccinated, outpacing the vaccination rate for the rest of the US.

The US' rate is currently 36.5%, according to the US Centers for Disease Control and Prevention (CDC).

The Navajo Nation, which is the largest reservation in the US, with over 300,000 members, has now vaccinated more than half of all adults living on the nation, Navajo Nation President Jonathan Nez said in a press release Sunday.

Nez said in the release that there is still much more to do in order to reach herd immunity.

"Over half the adult population on the Navajo Nation has been vaccinated, but to reach herd immunity we need more people to get vaccinated," Nez said.

The Navajo Nation experienced a scourge of Covid-19 cases that paralyzed much of the population and threw them into multiple weeks-long lockdowns over the course of the pandemic.

The challenges the Navajo Nation faced during the pandemic -- such as lower health care capacity and less resources -- led them to have the highest rate of Covid-19 infection in May of 2020, surpassing New York state's infection rate at the time.

In January, the Navajo Nation reported more than 75 communities were still suffering from "uncontrolled spread" of the virus.

At the time, officials attributed the rise in cases to increased family gatherings over the holiday season. As a result, officials put much of the community back on strict lockdown measures, including telling people to stay home on the weekends unless going to work or the grocery store.

Nez also said in January that issues unique to the community were causing the spike in cases, including multiple generations living in one home and lack of access to running water for 30-40% or residents.

"When one person gets Covid, goes home, they turn to infect the rest of the family," Nez said.

The Navajo Nation is also a "food desert," which means that more people are at the few grocery stores, convenience stores and gas stations to purchase food.

Communities of color were disproportionately impacted by the pandemic, as many communities like the Navajo Nation faced resource inequities, including access to healthcare.

Covid-19 cases and deaths have been on the decline in the Navajo Nation.

On Sunday, Navajo Nation reported 26 new cases and 10 new deaths, the news release said. A total of 1,273 people have died and more than 16,000 have recovered from Covid-19 as of Sunday.

This is a stark contrast from last year, when Navajo Nation was reporting hundreds of new cases and dozens of deaths daily.

Navajo Nation has now moved from orange to yellow restrictions, allowing for capacity increases for businesses and restaurants to 25 or 50 percent depending on location, according to a news release.

"The pandemic has led to many challenges, but it also making us stronger and giving us a renewed appreciation for our blessings in life," Navajo Nation Vice President Myron Lizer said in the news release. "We have to continue to pray for more strength every day and keep supporting one another. We are in this together and we are overcoming this pandemic day by day."

Data from the CDC shows that the area of northern New Mexico and Arizona where the Navajo Nation is located has more than 50% of the population fully vaccinated.

Since the US began rolling out vaccines in December, more than 218.9 million vaccine doses have been administered, according to data from the CDC.

However, as vaccinations have become more available to the general public, the demand has decreased.

On April 22, the 7-day average number of administered vaccine doses per day was 2.9 million, a 12% decrease from the previous week, according to the CDC.