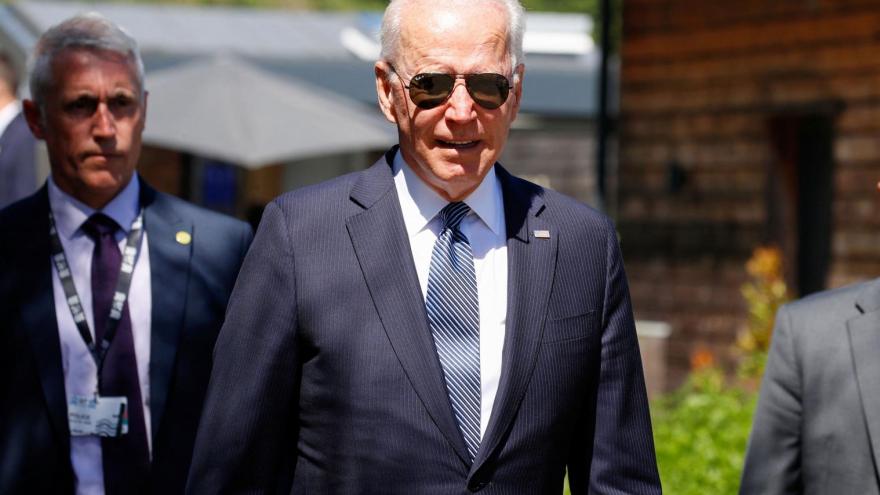 The NATO summit comes as President Joe Biden, pictured on June 13 in Cornwall, looks to reassert American leadership on the world stage and strengthen global partnerships during his first international trip as President.

(CNN) -- NATO leaders meeting in Brussels on Monday largely backed President Joe Biden's decision to withdraw troops from Afghanistan, according to a senior administration official present for the talks, as the US President made his first trip to the alliance's headquarters since taking office.

Biden arrived at the gathering with a vow to reaffirm the United States' commitment to a military alliance his predecessor viewed with disdain. He placed enhanced attention on Russia and China, along with the cyber-threats emanating from both countries. A final communiqué issued by the group highlighted the "threat" presented by Russia and the "challenges" posed by China following the meeting on Monday.

"I want to make it clear: NATO is critically important for US interests in and of itself. If there weren't one, we'd have to invent one," Biden said shortly after arriving during a meeting with NATO's secretary general, Jens Stoltenberg. "I just want all of Europe to know the United States is there."

But Afghanistan, an issue NATO has been engaged on for 20 years after the US invoked the Article 5 common defense clause following the 9/11 terror attacks, still loomed large.

Some American allies privately gripe they weren't properly consulted before Biden announced he would withdraw US troops by September 11. Some have also questioned how security can be maintained in the country when US troops leave, particularly at Kabul International Airport and other diplomatic facilities.

Biden said in a news conference after the summit that there was a "strong consensus" among leaders about his plans to withdraw troops from Afghanistan.

The group agreed in its final statement to provide "transitional funding" to keep the airport open, and Turkey -- a NATO member state -- committed to keeping troops in the country to safeguard the facility.

The official who was present for the closed-door NATO talks said there was unanimity among countries who had contributed troops to the Afghanistan mission that the withdrawal was the right decision.

"Each of them said that they ultimately agreed with the decision to draw down this year," the official said. "They understood that the time has come. And the real focus in the room was not on the question of staying or going in 2021, the real focus was on how we work together as an alliance to continue to provide support to the Afghan national security forces, the Afghan government and the Afghan people."

The official said despite reports of friction among NATO allies over the Afghanistan decision, "that is not the vibe in the room today."

"There's an incredible amount of warmth and unity around the entire agenda, including the 'in-together-out-together' aspect of the Afghanistan drawdown," the official said.

Aiming to convince allies America is back

The NATO summit came as Biden looks to reassert American leadership on the world stage and strengthen global partnerships during his first international trip as President.

Stoltenberg told reporters at the conclusion of the gathering that it resembled "the first day back at school."

"It was really great to be together and to meet together in person, as a truly transatlantic family," he said.

Biden arrived in Brussels on the heels of several meetings with US allies and the annual Group of Seven summit in Cornwall, England, where an overriding theme was America's return to the world stage.

Like at those meetings, Biden urged western allies to better align themselves against China and Russia, the chief foreign policy concerns of his administration.

"I think that there is a growing recognition over the last couple years that we have new challenges, and we have Russia that is not acting in a way that is consistent with what we had hoped, as well as China," Biden said at the start of the summit.

In the final communiqué, leaders wrote they "face multifaceted threats, systemic competition from assertive and authoritarian powers, as well as growing security challenges to our countries and our citizens from all strategic directions."

It said: "Russia's aggressive actions constitute a threat to Euro-Atlantic security" and that "China's growing influence and international policies can present challenges that we need to address together as an Alliance."

The summit got underway with all 30 NATO leaders entering a hall for a family photo, practicing social distancing. They were told via an overhead announcement to remove their masks and look at the cameras for a full 15 seconds. They were then told to look at a futuristic, columnar screen in the center of the room, which lit up with a video touting the alliance and was accompanied by soaring music.

"Cool," Biden appeared to mouth at the video's conclusion. The leaders were then told to put their masks back on before departing.

While at the summit, the President planned to place greater emphasis than ever on cyber threats, including allowing NATO members to invoke the Article 5 collective defense provision in the event of a cyber-attack. His national security adviser said on Sunday a final communiqué would say a member state could call for technical or intelligence support from other members in the event of an attack.

The final document also mentioned China for the first time, a reflection of the importance the Biden administration is placing on a threat from Beijing.

During the news conference, Biden said it was up to democratic nations to prove to the world that autocracies cannot deliver for their people as well as free nations.

"That's how we'll prove that democracy and that our alliance can still prevail against the challenges of our time, deliver for the needs and the needs of our people," he said.

Biden's meetings this week are meant to build up to a closely watched summit with Russian President Vladimir Putin on Wednesday. To that end, while in Brussels he also met with leaders of the Baltic states on the eastern edge of NATO to discuss the "threat posed by Russia," according to the White House.

Biden communicated to the Baltic leaders that the US wants a "stable and constructive relationship with Russia, but also will respond in the face of Russia's harmful activities," a senior administration official said.

China also arose in the conversations, the official said. And they discussed Belarus, and in particular "air piracy" in light of a recent forced diversion of a Ryanair flight bound for Lithuania that was carrying an opposition journalist.

Similar themes emerged in Biden's pull-aside meetings with the Polish and Romanian leaders. He discussed his intentions for the summit with Putin and offered a commitment to "stand up at the face of the threat posed by Russia," the official said.

Biden said Sunday he would reiterate the US's commitment to NATO's collective defense clause and communicate to allies that the US believes Article 5 is a "sacred obligation."

"We do not view NATO as a sort of a protection racket," Biden told reporters on Sunday in Cornwall, stressing the importance of the intergovernmental military alliance between the 30 European and North American countries.

The President continued: "We believe that NATO is vital to our ability to keep American security for the next ... remainder of the century."

The President is looking to take a vastly different approach to his predecessor, former President Donald Trump, who frequently railed against NATO, questioned the need for the organization and argued the US was contributing more than its fair share to the group.

The White House said in a release on Sunday that during the summit, NATO members will announce a new "strategic concept" that would guide the alliance's approach going forward as the strategic environment changes, including threats from China and Russia. They expect it to be adopted at next year's NATO summit, according to the release.

The statement also highlighted increased defense spending among member states, saying, "Allied leaders will recommit to (an Obama-era pledge) in its entirety and to providing NATO with cash, capabilities, and contributions of ready forces."

Biden is also expected to meet with Turkish President Recep Tayyip Erdogan while in Brussels. The meeting could be tense at points, as it comes after Biden officially recognized the massacre of Armenians under the Ottoman Empire as a genocide.

Monday's summit comes after G7 leaders issued a final communiqué of their shared agenda moving forward. It committed to end the coronavirus pandemic, combat the climate crisis, speaking out against human rights abuses in China, singling out Russia as harboring networks that have conducted ransomware attacks wreaking havoc on critical systems and issuing a call for a new study into the origins of Covid-19, among other issues.

After the NATO summit, Biden will participate in the US-EU summit on Tuesday. The meeting serves to underscore the US commitment to strong transatlantic ties, the White House says, and leaders will discuss global health security, global economic recovery, the climate crisis, enhancing digital and trade cooperation and strengthening democracy, among other mutual concerns.

The President is then scheduled to hold a highly anticipated summit with Russian President Vladimir Putin on Wednesday in Geneva.