Native tribal leaders are calling for the removal of Mount Rushmore 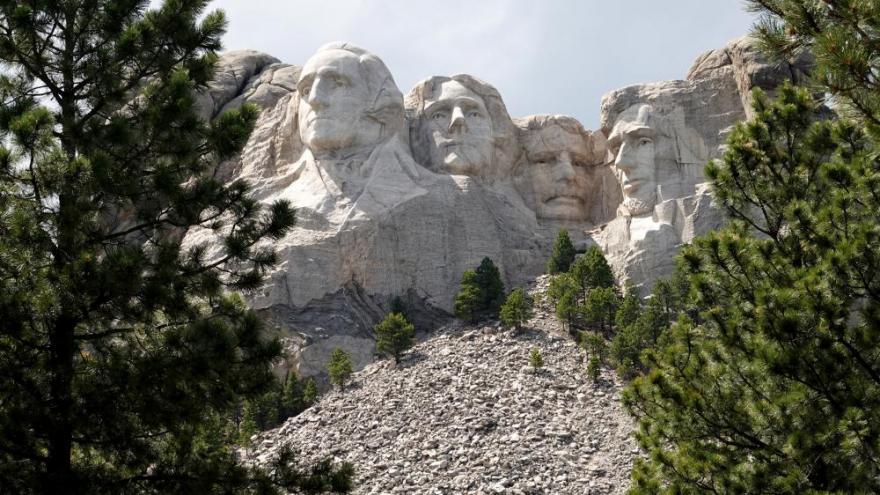 The busts of U.S. presidents George Washington, Thomas Jefferson, Theodore Roosevelt and Abraham Lincoln at Mount Rushmore National Monument on July 01, 2020 in Keystone, South Dakota. Native tribal leaders are calling for the removal of Mount Rushmore arguing that it is carved in an area that is considered sacred land to Natives.

(CNN) -- The chairman of the Cheyenne River Sioux Tribe is calling for the removal of the Mount Rushmore National Memorial, arguing that it is carved in an area that is considered sacred land to Natives.

"Nothing stands as a greater reminder to the Great Sioux Nation of a country that cannot keep a promise of treaty then the faces carved into our sacred land on what the United States calls Mount Rushmore," said Harold Frazier, chairman of the Cheyenne River Sioux Tribe in South Dakota, where the memorial is located.

"The United States of America wishes for all of us to be citizens and a family of their republic yet when they get bored of looking at those faces we are left looking at our molesters," Frazier wrote in a statement on June 29.

Frazier is just the latest in a slew of Native leaders who have spoken out the monument, which features the faces of four former presidents: George Washington, Thomas Jefferson, Theodore Roosevelt and Abraham Lincoln.

In June, Oglala Sioux President Julian Bear Runner said Mt. Rushmore is a "great sign of disrespect," noting he believes it should be "removed."

Both the Oglala and the Cheyenne River Sioux Tribe -- which is home to four bands of Sioux Natives -- are part of the Great Sioux Nation.

Mt. Rushmore is carved into the Black Hills, which had been occupied by Lakota Sioux Natives. In the Fort Laramie Treaty of 1868, signed amidst ongoing conflicts between Natives and Western expansion settlers, the US recognized Black Hills as part of the Great Sioux Reservation, according to US National Archives.

But once gold was discovered in the Black Hills, that all changed. Miners moved into the area, and the US Army began to move against the Native people in the mid to late 1870s. In 1876, the Great Sioux War was fought between the US and local Natives over ownership of the Black Hills. In 1877, the US confiscated the Hills through the "Sell or Starve" Act, which cut off rations to the Sioux people if they did not cede the land.

About 50 years later, in the 1920s, Mt. Rushmore was carved. More than two million tourists visit each year, according to the National Park Service, which describes the memorial on its website as "a symbol of freedom and hope for people from all cultures and backgrounds."

President Donald Trump and first lady Melania Trump will travel to Mt. Rushmore on Friday for an early Fourth of July fireworks celebration and flyover, the first of its kind in more than a decade.

"We are now being forced to witness the lashing of our land with pomp, arrogance, and fire, hoping our sacred lands survive," Frazier said. "This brand on our flesh needs to be removed, and I am willing to do it free of charge to the United States, by myself if I must."