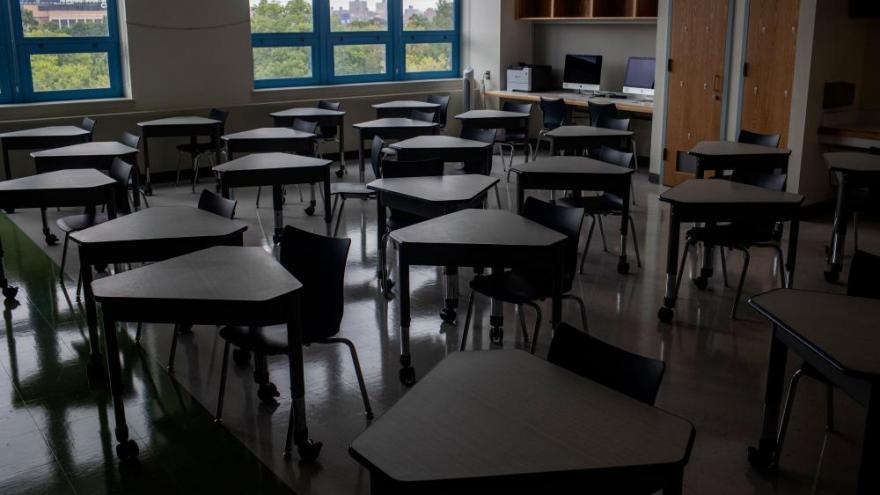 The Nation's largest school district welcomes New York students back to in-person learning. An empty classroom at P.S. 143 in the New York borough of Queens is seen August 18.

New York schools first went remote in March 2020 as the novel coronavirus started spreading throughout the United States. They reopened for some in-person learning last year, but many students continued with a virtual option, even before in-person instruction was interrupted with school closures and reopenings as circumstances changed.

This time, there won't be a remote option for the district's approximately 1 million students.

Shanice Jones, the mother of a 7-year-old who attends P.S. 25, said she has some concerns for his safety.

"I'm happy that he's back at school, he's back around his friends, which is like one of the things that he was missing the most, being around his friends and learning in a school environment," Jones said. "But I do feel like it was a safety concern with coming back and it is a little scary."

Kevin Jacobs, a US history teacher and soccer coach at a Manhattan high school, told CNN he's "really excited to see students again," saying there are more advantages to having them in the classroom instead of online.

"I think a lot of teachers, whether they've been working a long time, as I have, or were brand-new, maybe feel like they worked harder to do online schooling than they've ever worked before," he said. "And that's not suggesting we want it easier this year. To come back in, there will be lots of things that are hard, lots of new stuff to do."

Still, de Blasio said last week in a news conference that 65% of students between the ages of 12 and 17 have gotten at least one dose.

There is, however, a vaccine mandate for New York City Department of Education employees, who are required to have at least one dose of a Covid-19 vaccine by a September 27 deadline.

On Friday, New York City Schools Chancellor Meisha Porter told CNN that 74% of teachers have had at least one shot, and she's confident all staff members will have gotten at least a single dose by the deadline.

"This is a moment where we're talking about the public safety of the entire community," she said. "So I am the biggest cheerleader: Let's get folks vaccinated."

The United Federation of Teachers said Friday that New York City teachers who refuse to get vaccinated and have documented medical or religious exemptions must be offered non-classroom assignments, citing a decision by an independent arbitrator.

Others who are hesitant must be offered unpaid leave that maintains their health coverage or be given a severance package, the teachers union said in a statement. The unpaid leave would last until September 2022. If those teachers did not get vaccinated and return to their jobs by that time, it would be assumed they had resigned.

What happens if a student tests positive?

New York City officials detailed what would happen should there be a Covid-19 positive test within a middle or high school classroom.

"When there's any kind of exposure in a school, if someone's vaccinated, even if they were in a room with someone who ends up having Covid, if you are vaccinated and non-symptomatic, whether an adult or student, you are staying in school," de Blasio said Monday.

"That is now the CDC standard. You are staying in school," he said.

NYC health advisor Dr. Jay Varma said individuals will be notified of exposure within the classroom and if they develop symptoms, it's "critically important" they not return to school and "get tested immediately," Varma said.

Last week school officials said that if there's a positive case in an elementary classroom, those students -- who are largely ineligible for vaccination -- will be quarantined for 10 days, during which time they'll receive remote instruction.

Those who aren't vaccinated will be told to quarantine for 10 days after exposure. On the fifth day, they can take a Covid-19 test and return on the seventh day if the result is negative.

After a "short period" offline Monday morning, the school system's health screener was back up and running. Danielle Filson, press secretary for the NYC Dept of Education, said the screener, an online health survey, is filled out by anyone who enters a school building and will be filled out daily.

The district has a number of other mitigation measures in addition to vaccinations, including mandatory face coverings for students and staff regardless of their vaccination status. Students will also be asked to maintain a physical distance of 3 feet when possible.

For students who aren't yet vaccinated, inoculations will be available at numerous school sites throughout the city.

Air purifiers will be present in every classroom, Porter said, and every school will have on hand a 30-day supply of personal protective equipment, including masks.