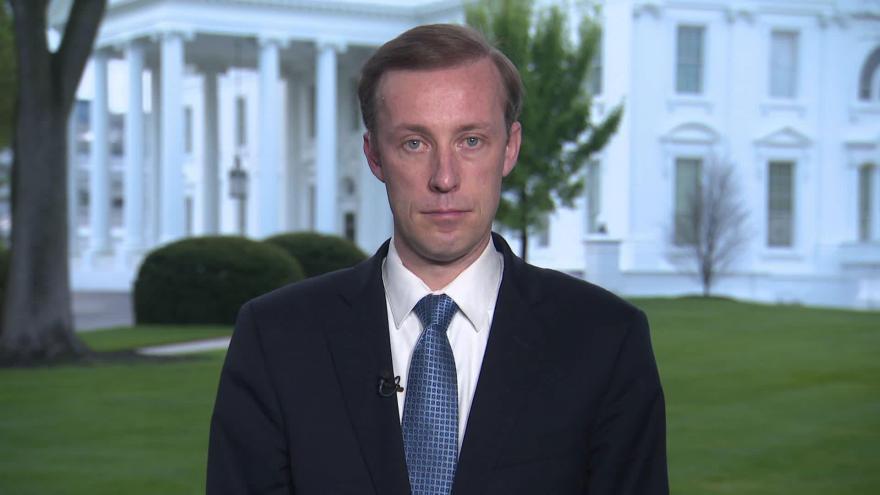 "We have communicated to the Russian government that what happens to Mr. Navalny in their custody is their responsibility and they will be held accountable by the international community," Sullivan told CNN's Dana Bash on "State of the Union." "In terms of the specific measures that we would take, we are looking at a variety of different costs that we would impose and I'm not going to telegraph that publicly at this point."

"But we have communicated that there will be consequences if Mr. Navalny dies," he added.

Navalny's supporters have said the 44-year-old Kremlin critic's health is rapidly deteriorating, with his press secretary saying he is "dying" and and his doctors saying medical tests show he's at growing risk of renal failure and heart problems. The physicians wrote a letter on Saturday to Russian prison services (FSIN) requesting access to see him. CNN is not able to independently verify the state of Navalny's health.

Navalny said in a post on his official Instagram account on Friday that he is being threatened with force-feeding as he continues a hunger strike. He had returned to Russia in January from hospitalization in Germany, where he was recovering from a nerve-agent poisoning that's been blamed on the Kremlin.

President Joe Biden on Saturday said Navalny's situation was "totally unfair and totally inappropriate" but declined to weigh in further. He did not raise Navalny during remarks about Russia sanctions this week, and the subject was not a topic of discussion in a phone call on Tuesday with Russian President Vladimir Putin, according to White House and Kremlin readouts of the conversation.

Asked by Bash why Biden had not used his platform to call for Navalny's release this week, Sullivan said the White House had determined that private communications were more effective.

"We actually have made the judgment that direct communication to the Russian government on this issue -- including both how we see it, how our allies and partners see it and what might unfold should something terrible happen to Mr. Navalny ... should he pass away -- and we have judged that rather than just make general statements publicly, the best way to deal with this issue is privately and through diplomatic channels direct to the upper-most levels of the Russian government," Sullivan said.

In his phone call with Putin, Biden proposed holding a summit in the coming months in a third-party country. Later, the White House specified the potential summit would occur in Europe if it materializes.

Sullivan on Sunday declined to say whether Biden would still agree to meet with Putin should Navalny die in prison.

"There isn't currently a summit on the books," he said. "It's something we're talking about. And that summit would have to take place, of course, in the right circumstances in a way that could actually move the relationship forward."

"But I'm not going to get into hypotheticals about when or whether summit would likely occur," Sullivan said.