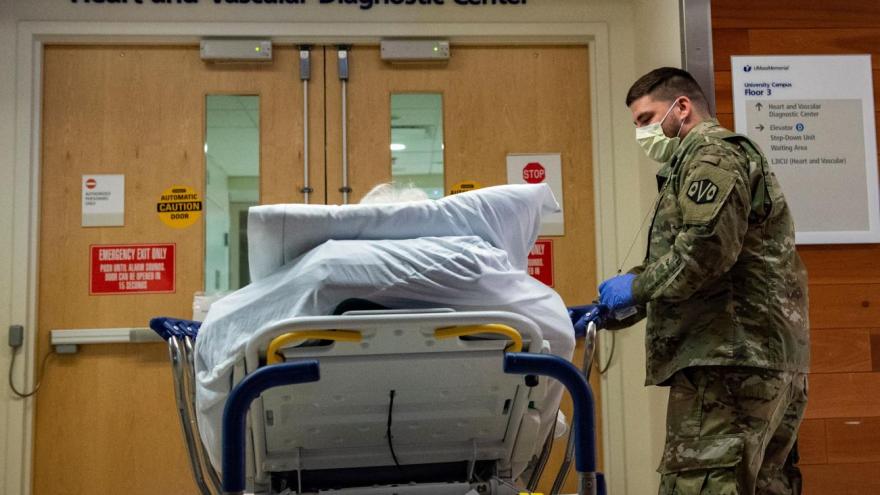 A soldier transports a patient at UMass Memorial Medical Center in Worcester, Massachusetts on December 30.

(CNN) -- An incoming tide of patients is slowly drowning UMass Memorial Medical Center, and the US military's National Guard is working to plug the gaps. In wave after daily wave, the emergency crews pull up to the ambulance bay, dropping off patients for which there is no room.

"It's just the perfect storm for a nightmare here in the emergency department," says Dr. Eric Dickson, the CEO of the hospital and an emergency physician.

The main hospital in central Massachusetts is already over capacity at 115%, and the numbers are only expected to rise in the coming weeks as the Omicron variant spreads rapidly across the region.

The primary Covid-19 testing site in downtown Worcester has been packed. On Tuesday, the positivity rate was 40%, according to the hospital, more than double what it was one year ago.

The most severe of those cases, the hospital warns, will show up over the next two weeks, a period when the hospital is already short-staffed. About 500 people are out with Covid, mostly medical staff who have tested positive for Covid or are exhibiting symptoms.

Dickson calls it the "wild card" for the hospital -- an unknown that will affect the hospital's very ability to treat incoming patients. The space, he says, can be found. But are there enough staff to allow the hospital to function?

The Massachusetts National Guard is part of that solution, deploying to hospitals just after Christmas.

"We have soldiers and airmen that may be computer programmers, that may be school teachers, they may be working in the community, business people, whatever that is, and they're filling very different roles this time," says Lt. Col. Patrick Donnelly of the Massachusetts National Guard, "roles as drivers or as transport people within the hospital - food service, security, and patient observance."

It is the third Covid activation for this Guard unit since the beginning of the pandemic two years ago, and even though it came at an "awkward time" during the holiday season, Guard members stepped up for the mission.

"We're able to feel that these guys are working very hard," says Staff Sgt. Julius Annan, "and that our presence here is helping them just even mentally-wise."

National Guard medical teams are now deployed in 10 states, according to the Army Northern Command, helping in hospitals and medical facilities. Some 13,000 Guard members have helped across the country at vaccine sites and more, according to Maj. Gen. Jill Faris, director of the Office of the Joint Surgeon General at the National Guard Bureau.

"We've done just about anything affiliated and associated with Covid support. We've seen it happen in all of our states and territories," Faris said.

Military discipline helps in a crowded hospital, where patient beds fill some of the hallways. And so does military training. Spc. Stephen Prochniak was deployed to Lowell General Hospital in the emergency ward one week ago when he heard an alarm he didn't recognize. The nurse sitting next to him was halfway down the hall "in a dead sprint" before he was able to catch up.

A patient had fallen to the floor and wasn't breathing or moving. The patient had no pulse. A doctor asked if Prochniak knew CPR, he recalls, and when he said he did, the doctor told him, "Glove up, get in there!"

Prochniak swapped in and out with one other person, performing CPR for a few minutes at a time, until emergency room staff detected a pulse. The 23-year-old guardsman -- who just re-upped for six more years -- remains humble about the role he played.

"I was just a very small part of the team of the real heroes that are doing this kinda thing every day," Prochniak told CNN. "I was just in the right place at the right time to help -- nothing more, nothing less."

In a hospital like UMass Memorial Medical Center where the staff is already beyond exhaustion, every new patient -- Covid or not -- is a strain on an already strained system. On Wednesday, the hospital says they had 232 Covid patients, nearly 70% of which were unvaccinated.

"Especially the people that have gotten boosters, if they get [Covid], they're not getting that sick, but people that are unvaccinated, they're dying," says Patricia Longvall, a nurse at the hospital. "We're losing 'em."

Longvall also worries about the patients who never make it into the hospital, such as someone who has symptoms of a heart attack but stays home because of how overwhelmed emergency rooms have become.

"Those people get sicker at home and maybe don't even make it in here," she says.

And the next two weeks could be the worst yet, based on the positivity rate at the city's main testing site.

Dickson, the hospital CEO, worries about a situation where the entire medical emergency response system backs up all the way to the 911 call center. If the hospital doesn't have enough staff to treat patients and move them out of the emergency room, then ambulances have no space to drop off new patients.

Dickson says they've already had cases where an ambulance had to wait and hold a patient for nearly 30 minutes before they could find space for them in the emergency room.

"If that gets bad enough, that ambulance is offline and can't get out to the next call," Dickson says. "The whole system backs up and ultimately it backs up at the 911 system when you call for an ambulance and there's just no ambulances to come pick you up."

It's a worst-case scenario, Dickson acknowledges, but one that he says isn't out of the question over the next 2-4 weeks.