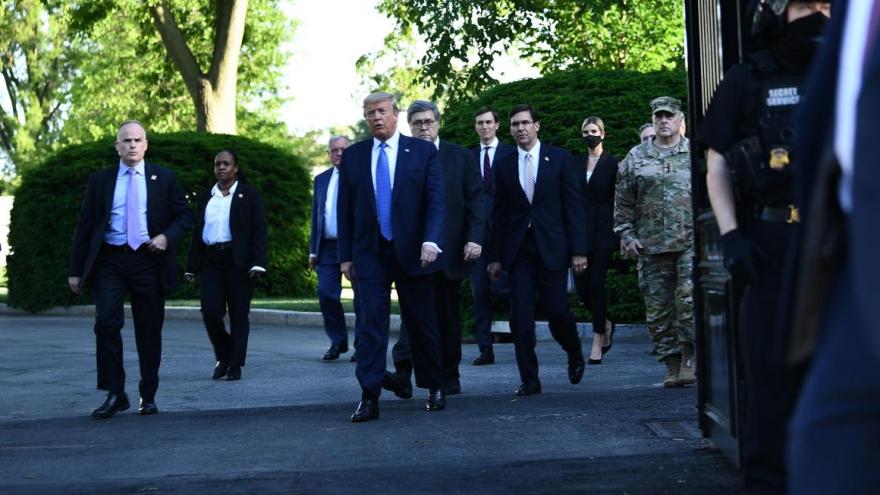 (CNN) -- A National Guard official will tell Congress that the widely criticized decision to forcefully clear protesters from a park outside the White House last month was made even though demonstrators were acting peacefully, a view at odds with public comments by top Trump administration officials.

The prepared testimony of DC National Guard Major Adam D. DeMarco, who is set to appear before a hearing on Tuesday, challenges Attorney General William Barr's account of the dispersal. DeMarco, who described himself as one of the senior National Guard officials on the scene, ran as a Democrat for Maryland's 3rd Congressional District in 2018.

"The demonstrators were behaving peacefully, exercising their First Amendment rights," DeMarco is expected to say, adding he was surprised the clearing operation began well in advance of a 7 p.m. ET curfew set by Washington, DC, Mayor Muriel Bowser.

Barr has previously defended the use of force to clear the protesters, saying his decision to disperse protesters followed signs that the crowd was "becoming increasingly unruly." The removal, he said, had nothing to do with a photo-op staged by President Donald Trump minutes later, in which he walked across Lafayette Square to hold a Bible in front of St. John's Episcopal Church, which had suffered damage in protests the night before.

The acting chief of the US Park Police is set to tell Congress that demonstrators were cleared from the park outside the White House once security fencing arrived for installation.

Park Police acting Chief Gregory Monahan's prepared opening statement states: "Once the fencing arrived, an on-the-ground assessment of the violence and danger presented by the crowd led to the clearing of the Park and the installation of the fence."

DeMarco's testimony, however, said that fencing arrived more than two hours after the operation began.

says Barr and other officials arrived in Lafayette Square at 6:05 p.m., adding that the attorney general observed protesters and "appeared to confer with Park Police officers." DeMarco's testimony suggests he was not part of that meeting, and instead was briefing the chairman of the Joint Chiefs of Staff, Gen. Mark Milley.

"At around 6:20 p.m., after the Attorney General and General Milley departed Lafayette Square, the Park Police issued the first of three warning announcements to the demonstrators, directing them to disperse," DeMarco is expected to say.

After CNN and other news outlets reported that Barr ordered the area cleared, Barr told The Associated Press that he did not give "tactical commands."

DeMarco says he was not informed that Trump would visit the church in the area that was cleared.

"The President's arrival was a complete surprise, as we had not been briefed that he would enter our sector," DeMarco's testimony says.

Top Trump administration officials have claimed the use of force was justified against protesters they have described as violent, despite eyewitness accounts disputing that characterization.

Trump has shared a letter on Twitter that referred to the protesters as "terrorists," and Interior Secretary David Bernhardt told House Natural Resources Chairman Raul Grijalva of Arizona that protesters were "assaulting law enforcement with projectiles while threatening to storm the secured areas."

CLARIFICATION: This story has been updated to remove a description of Major Adam DeMarco as a top National Guard official. It also has been updated with additional context about his role on the day of the protest and his past congressional candidacy as a Democrat.