Former sports doctor sentenced to 40 to 125 years in prison 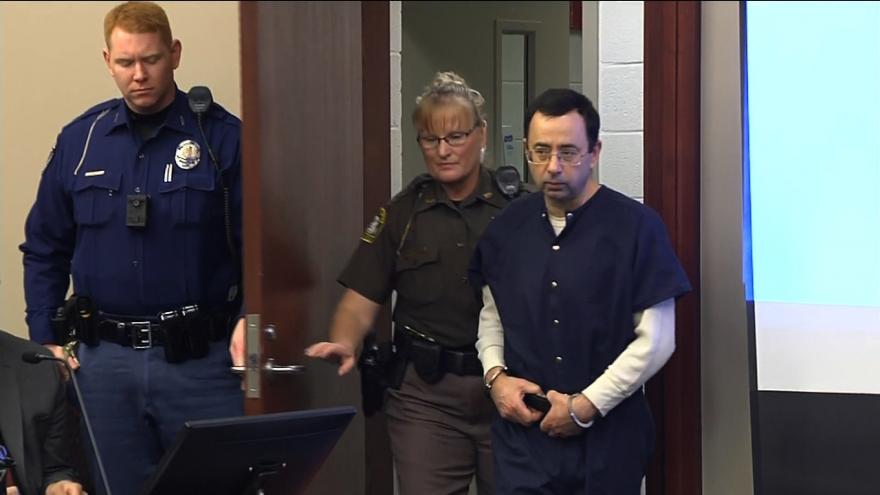 A judge sentenced Nassar on Monday morning in a case out of Eaton County, Michigan. The case centers on sexual assaults at Twistars, a gym for elite gymnasts.

But more than 260 women and girls say Nassar sexually abused them under the guise of medical treatment. Some of the women say the abuse occurred decades ago.

The 54-year-old Nassar has admitted that he molested girls and young women during his time also working at Michigan State University and USA Gymnastics, which trains Olympians.

Nassar was sentenced earlier this month to 40 to 175 years in prison in a separate Michigan case. He also was previously sentenced to 60 years in federal prison for child pornography crimes.

A prosecutor says disgraced former sports doctor Larry Nassar deserves the "blame and shame" for molesting girls, not their parents.

Assistant Attorney General Angela Povilaitis used a portion of her closing argument Monday at Nassar's sentencing hearing to speak about people questioning parents' role in not detecting Nassar's sexual assaults under the guise of medical treatment.

She says victim shaming and parent shaming "must stop." She says Nassar was believed by authorities for years and "each time he got away, he was empowered to continue and perfect his abuse."

She asked the judge to sentence Nassar to 40 to 125 years in prison. He already is guaranteed to spend life in prison under other sentences.

A former sports doctor already facing the rest of his life in prison will get a third and final sentence in a sexual assault scandal that involves more than 260 victims.

Larry Nassar is returning to court Monday in Eaton County, Michigan. He listened to dozens of victims last week and was almost attacked by a man whose three daughters said they were molested.

The 54-year-old Nassar pleaded guilty to penetrating girls with his hands when they sought treatment for injuries at Twistars, a gymnastics club. He worked for Michigan State University and USA Gymnastics, which trains Olympians.