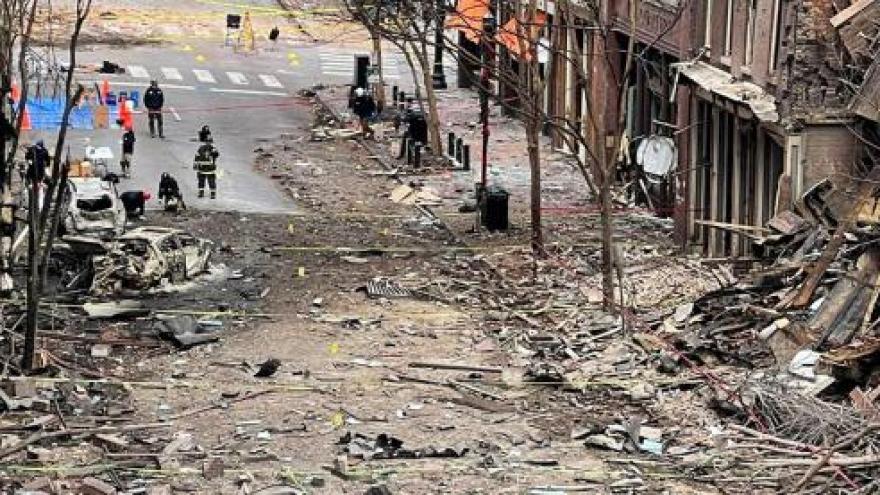 The scene of the Nashville Christmas explosion is pictured.

Federal agents sifted through debris for evidence of an explosion that rocked a historic part of Tennessee's capital on what was a quiet holiday morning. Authorities were to escort people to the site to survey and secure their damaged homes and businesses.

Commission staff have not yet assessed damage in the area.

"It is obvious that this is not going to be a quick fix," Roberts added.

Federal investigators collecting evidence from the rubble have sifted through half the crime scene and were expected to finish by Friday, FBI spokesman Jason Pack said.

City workers have been given access to the scene for cleanup and safety assessments, according to Pack.

More than two dozen specialists with the FBI's Victim Services Division were sent to Nashville to assist residents and business owners, Pack said.

Access will be given only to buildings deemed safe by structural engineers, Metro Nashville Police Deputy Chief Chris Taylor said at a news conference Monday.

It could be several more days before anyone can enter other buildings on the street where the explosion took place, he said.

A recreational vehicle was parked on 2nd Avenue North right outside an AT&T transmission building Friday when a message went out to those nearby warning them to evacuate before the vehicle exploded, damaging more than 40 buildings and injuring at least eight people. The motive is unknown.

Though the extent of their injuries have not been disclosed, all patients have been discharged, TriStar Centennial Medical Center spokesperson Jill Newham said Monday.

And even though AT&T said the majority of service to the area has been restored, residents say images of the devastation are hard to bear.

Small business owners, who have fought to survive the economic hardship of the coronavirus pandemic, now worry how they will recover from this added injury.

"But right when we get a little light at the end of the tunnel, it all goes away in two seconds."

An explosion on a historic street

The white RV showed up outside the AT&T building in downtown Nashville at 1:22 a.m. CT on Friday, police said.

Several hours later, residents reported the sound of rapid gunfire, and police responded to the historic street around 5:30 a.m.

Then, the vehicle began broadcasting a computerized, female voice warning that an explosion would take place in 15 minutes. The RV also broadcast Petula Clark's 1964 hit "Downtown," a song about how the bustle of downtown can cure a lonely person's troubles.

As the countdown ran out, the message changed.

Then, the RV exploded.

"I just saw the biggest flames I've ever seen, the biggest explosion," Officer Amanda Topping said. "I just saw orange and ... felt the heat, the wave."

With no one claiming responsibility and the intent appearing to be to avoid mass causalities, authorities spent the following days seeking the bomber's identity.

On Monday, he was named as 63-year-old Anthony Quinn Warner.

Warner's father previously worked for AT&T, Tennessee Bureau of Investigation director David Rausch confirmed Monday. He said investigators are looking into whether that may be relevant to the motive behind the bombing.

Warner, of Antioch, Tennessee, had not previously been on law enforcement's radar, said Rausch, the TBI director.

FBI agent Doug Korneski said investigators are interviewing people who knew Warner to try to learn a possible motive. There is no indication that anybody else was involved, he said.

"These answers won't come quickly," Korneski said. "Though we may be able to answer some of those questions ... none of those answers will ever be enough for those affected by this event."

"I said, 'Hey, Anthony, is Santa going to bring you something good for Christmas?'" Laude said. "He said, 'Yes, I'm going to be more famous. I'm going to be so famous Nashville will never forget me.'"

Laude said he thought Warner was referring to something good happening.

"Let me be very clear, he and I were not friends," he said. "You will not find anyone in my neighborhood who will claim to be a friend of his. He was just a legitimate recluse."

Remnants of the RV were recovered from the scene and investigators with the Tennessee Highway Patrol were able to determine its Vehicle Identification Number, authorities said Sunday. Korneski said the VIN number matched that of a vehicle registered to Warner.

Investigators positively identified Warner by comparing DNA from the scene to that on gloves and a hat from a vehicle he owned, Rausch said Monday.

Correction: A previous version of this story incorrectly stated Chris Taylor's title. He is the deputy chief of the Metro Nashville Police.