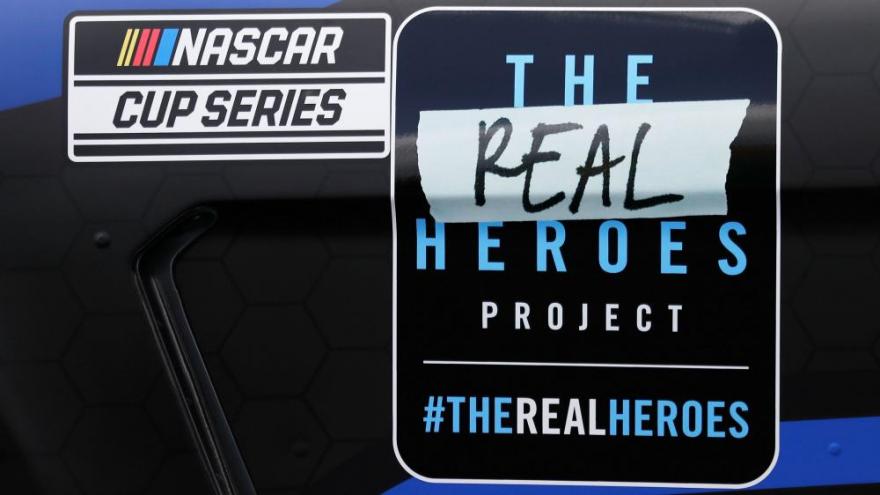 A decal bearing the name of the Real Heroes 400 NASCAR Cup Series auto race is displayed on the car of driver Chris Buescher Sunday, May 17, 2020, in Darlington, South Carolina.

(CNN) -- NASCAR racing returned Sunday after more than two months off due to the coronavirus pandemic that shut down much of the country.

The comeback race at Darlington Raceway in South Carolina, dubbed The Real Heroes 400, was held without fans, according to NASCAR.

The event honored health care workers as part of the The Real Heroes Project, a collaborative initiative among more than a dozen sports leagues to recognize and pay tribute to medical professionals on the front lines fighting Covid-19. NASCAR is one of the first professional sports leagues to resume competition amid the pandemic.

"As the coronavirus challenges our country in unprecedented ways, the frontline healthcare workers -- the nurses, paramedics, emergency physicians and many others -- continue to inspire us with their strength and bravery in caring for their fellow Americans," said Jill Gregory, NASCAR executive vice president and chief marketing and content officer. "These men and women are the real heroes and the NASCAR industry is incredibly proud to honor their selflessness and service."

Those honored also served as grand marshals for the race and appeared in a montage to give drivers the command to start their engines. NASCAR also tweeted out the video.

'Be There Bears' honored by NASCAR

Michelle Vaughan, an ICU nurse at the Bon Secours St. Mary's Hospital in Richmond, Virginia, was among the health care workers honored by NASCAR.

Vaughan came up with a creative way to connect Covid-19 patients and their loved ones who cannot be together due to increased restrictions at hospitals.

She developed the Be There Bears project to help ICU patients hear their loved ones' voices by placing recorded phone messages from family members into teddy bears, Bon Secours said.

"After calling several families and hearing the messages they left for their loved ones, it brought me to tears. Taking it one step further, getting to put the bears in the arms of the patients, I was overcome with pride and happiness to know that my patients might be able to feel their families' presence," Vaughan said. "It's so important not only for our patients to feel the love and support of their families, but for us as nurses to feel connected to our patients and their families as well."

Vaughan's name appeared on FedEx Racing driver Denny Hamlin's car during Sunday's race. Hamlin tweeted a video message about the honor on Thursday, noting he's "lucky enough to go back to work" this weekend "and it's because of the frontline heroes like Michelle Vaughan."

Sunday's race also marked the comeback of driver Ryan Newman, who was injured in a fiery crash in final seconds of the Daytona 500 in February.

"Great day in America," Newman tweeted on Sunday. "Thankful to get back at it for all of us."

Newman had been in the lead during the final lap of Daytona 500 when another driver hit his bumper, sending his car into the wall and causing it to flip into the air. Then, his car was hit by another after it landed back on the track, sending him airborne again. Newman's car burst into flames as it skidded, upside down, across the finish line.

Rescue crews had to cut the car's roof off to pull Newman from the vehicle. He miraculously walked out of the hospital two days later.

At a news conference on Thursday, Newman said he has no memory of his horrific crash, nor does he remember his hospital stay until he was leaving with his kids.

"I was medically treated to not know (about my condition)," he said last week. "They were trying to keep me in a somewhat of a medically-induced coma from what I've been told, and that medicine kind of zoned me out, so I really don't have any memories or recollection of any of my crash until I actually had my arms around my daughters walking out of the hospital."

Newman made his 22nd Cup Series start at Darlington -- a track where he has 13 top-10 finishes with seven top-five finishes.

"I'm hoping to do every lap and then one more after that," Newman, who was cleared to return to racing April 28, said of Sunday's race. "I think they are having a victory lap still. I was ready to do that in Daytona."