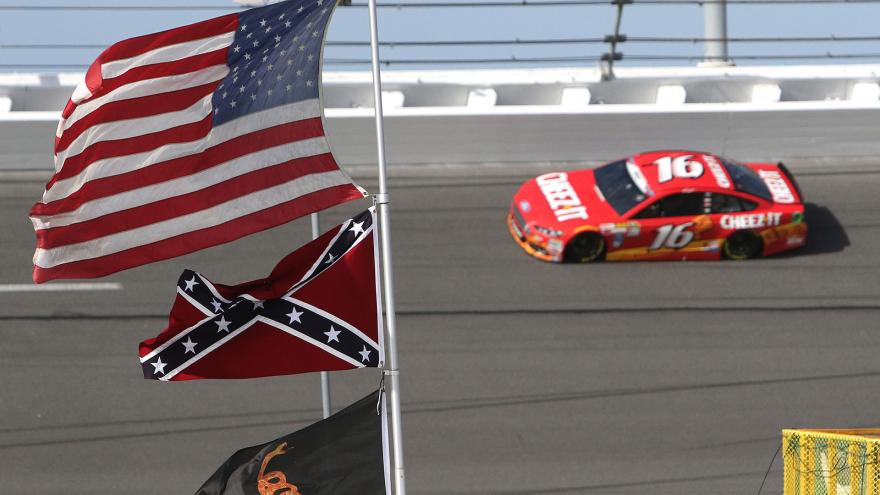 NASCAR said it is banning the flying of Confederate flags at its races.

(CNN) -- On Monday, the only full-time African American driver in NASCAR's Cup Series called for the auto racing body to ban Confederate flags from its events. Two days later, his dream came true.

"The presence of the Confederate flag at NASCAR events runs contrary to our commitment to providing a welcoming and inclusive environment for all fans, our competitors and our industry," NASCAR said in a statement on its website hours ahead of its race Wednesday night in Martinsville, Virginia.

"Bringing people together around a love for racing and the community that it creates is what makes our fans and sport special. The display of the Confederate flag will be prohibited from all NASCAR events and properties."

This week, driver Bubba Wallace told CNN's Don Lemon he wanted NASCAR to go further than 2015, when it asked fans not to bring the Confederate flags to races.

"No one should feel uncomfortable when they come to a NASCAR race. It starts with Confederate flags," Wallace said. "Get them out of here. They have no place for them."

Before Wednesday's race, Wallace told Fox Sports 1 that NASCAR made the right call.

"Bravo," he said while clapping. "Props to NASCAR and everybody involved. ... There's a lot of emotions on the racetrack and off the racetrack that are riding with us. Tonight is something special. Today has been special. Hats off to NASCAR."

Wallace had told CNN that initially Confederate flags did not bother him, but after educating himself he sees how uncomfortable it makes people.

"There's going to be a lot of angry people that carry those flags proudly but it's time for change," he said.

At a race Sunday, Wallace wore a "I Can't Breathe" T-shirt in solidarity with protesters around the world who have been calling for justice in the death of George Floyd, an unarmed black man who died at the hands of Minneapolis police.

He wore the shirt again Wednesday.

A week after Floyd's May 25 death and amid massive protests for racial justice, NASCAR released a statement.

"For us to heal and move forward as a nation, we all need to listen more and be united in the stand against racism, hatred and senseless violence and loss of life. And we must all hold ourselves accountable to driving positive change." NASCAR said.

"Thank you, NASCAR for doing the right thing. You are so central to our Carolina culture and I'm glad spectators and fans of all races, particularly Black fans like me, will feel more welcomed and respected at your events," Lyles tweeted.

The NASCAR Hall of Fame is in Charlotte, and nearly all of the sports' teams are based in the area.

"It should have been done long ago," she tweeted. "Nonetheless, thank you, ⁦@NASCAR, for stepping out on the right side of history by banning Confederate flags at events and on properties."

Wallace raced a black car with the words "#blacklivesmatter" on it Wednesday night when he finished 11th.

In 2013, Wallace, 26, became the first African American driver since Wendell Scott (1963) to win an event sponsored by NASCAR when he won a trucks series race at Martinsville

Martinsville is one of the tracks where Confederate flags are often seen in the parking lots and campgrounds, but Wednesday's race will have no fans.

NASCAR won't allow limited numbers of fans in the grandstands until Sunday at the Cup race in Homestead, Florida.

NASCAR was formed in 1948 and runs three national series -- Cup, Xfinity and trucks.