NASA's Artemis I mission to the moon has been delayed 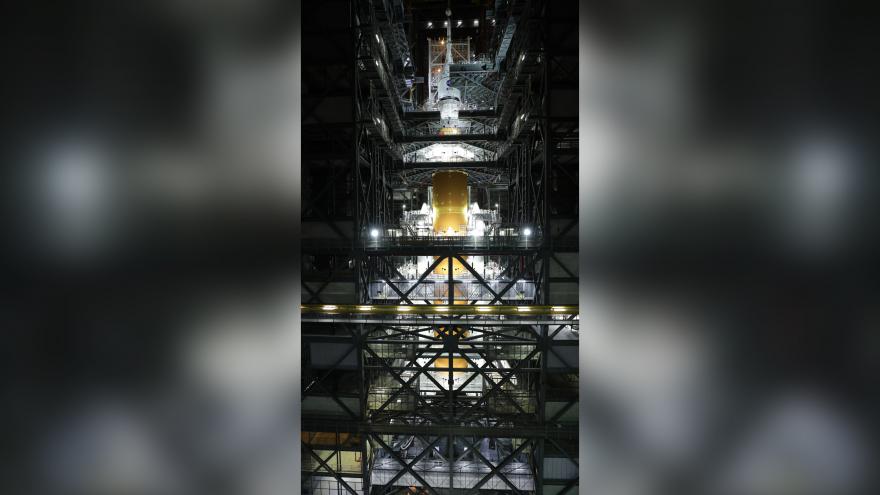 (CNN) -- The launch of Artemis I, an uncrewed mission serving as the first step of NASA's ambitious program to return humans to the moon, has been delayed until at least February, according to the agency.

The mission was originally scheduled to launch in November, but delays due to the pandemic, storms like Hurricane Ida and other factors have drawn out the mission timeline.

During the flight, the uncrewed Orion spacecraft will launch atop the SLS rocket to reach the moon and travel thousands of miles beyond it -- father than any spacecraft intended to carry humans has ever traveled. This mission is expected to last for a few weeks and will end with Orion splashing down in the Pacific Ocean.

The agency completed stacking, or securing the Orion spacecraft on top of the giant Space Launch System rocket, just before midnight Thursday at NASA's Kennedy Space Center in Florida.

"With stacking and integration of NASA's Space Launch System rocket and Orion spacecraft complete, we're getting closer and closer to embarking on a new era of human deep space exploration," said NASA Administrator Bill Nelson in a statement. "Thanks to the team's hard work designing, manufacturing, testing, and now completing assembly of NASA's new rocket and spacecraft, we're in the home stretch of preparations for the first launch on the Artemis I mission, paving the way to explore the Moon, Mars, and beyond for many years to come."

The stack, which stands 322 feet (98 meters) tall inside the Vehicle Assembly Building, is ready to enter into the final testing phase ahead of a launch window that opens on February 12 and closes on February 27.

This last stage will include integration tests between Orion and the rocket before the entire stack is rolled to the launch pad. Then, the stack will go through the final test, called a wet dress rehearsal, which includes running through the full set of operations to load propellant into the fuel tanks and a launch countdown -- basically everything necessary for a launch without actually launching.

If this test, scheduled for January, is successful, the stack will go back into the Vehicle Assembly Building until it's ready to launch for real.

After the uncrewed Artemis I flight, Artemis II will be a crewed flyby of the moon and Artemis III will return astronauts to the lunar surface, putting a woman and person of color there for the first time. The timeline for the subsequent mission launches depends on Artemis I.

"It's taller than the Statue of Liberty, and I like to think of it as the Statue of Liberty, because it's a very complicated piece of equipment, and it's very inclusive, it represents everybody," said Tom Whitmeyer, deputy associate administrator for exploration systems development at NASA, in a press call Friday. "The rocket itself was built using people from every state across the United States of America. And it's a very important achievement for this country."

While completing stacking is a key milestone in the mission's homestretch, there are other challenging priorities ahead, said Mike Sarafin, Artemis I mission manager at NASA Headquarters, during the press call.

Tests like the wet dress rehearsal are designed to ensure Artemis I is fully prepared. Results of the test could change the launch date.

"We've purposely pulled together a stress test for our Space Launch System rocket and our Orion spacecraft," Sarafin said. "Our four primary objectives are to demonstrate Orion's ability to return from the moon at lunar reentry conditions, to operate our flight systems in the flight environment, to retrieve our spacecraft, and then what I like to call bonus objectives."

Those bonus objectives include the "remarkable photos" that will be captured by wingtip cameras mounted on the ends of Orion's solar array wings during its journey between Earth and ///THE/// moon, while it's encircling the moon, and as it returns home and ultimately splashes down in the ocean.

"Orion is going to take selfies of itself, and we'll see the moon in the background and we're off in the distance," Sarafin said. "We're going to see the Earth some 270,000 miles away, and really gain a new perspective for the Artemis generation."

Ultimately, the date of the launch will determine the duration of the mission.

During the 15-day launch period in February, half of the days could lead to a long-class mission, with a duration of six weeks, while the other days would mean a short-class mission lasting about four weeks.

If the launch doesn't happen in February, there are also opportunities for Artemis I to lift off the pad between March 12 and 27 and between April 8 and 23.

Artemis I will be the final proving ground for Orion before the spacecraft carries astronauts to the moon, a thousand times father from Earth than where the space station is, said Cathy Koerner, Orion program manager at NASA's Johnson Space Center, during the press call.

"It will really will demonstrate the capability of our spacecraft, and in more extreme radiation environments," she said. "We're looking forward to sending Orion off to the moon and watching it perform in that environment.