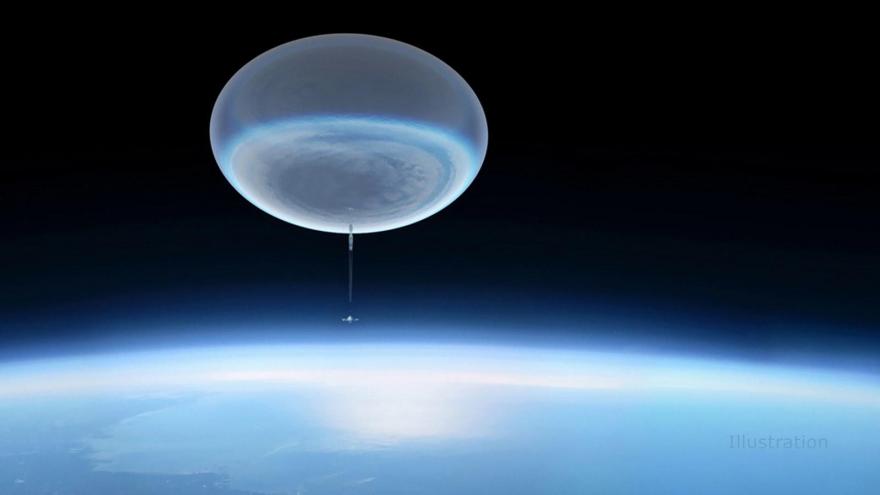 NASA'S latest Scientific Balloon project will send a far-infrared telescope to Earth's stratosphere, over 24 miles from the surface, to study star formation.

(CNN) -- NASA plans to send an enormous balloon to the edge of Earth's stratosphere in search of secrets about how stars and planets form.

The space agency's ASTHROS mission will depart from Antarctica in December 2023 and spend three weeks in the stratosphere, the section of the atmosphere where the ozone layer sits. Its components include a balloon the size of a football field and a specialized far-infrared telescope designed to pick up light the human eye can't detect.

Engineers at NASA's Jet Propulsion Laboratory will begin testing next month. While you wait for its launch, here's what you need to know about NASA's buoyant observatory.

NASA's betting on a balloon that, when inflated, will be 400 feet wide. Dangling below it, a gondola will cradle instruments like a special far-infrared telescope and cooling system that keep the far-infrared instruments at "absolute zero," or the coldest temperature matter can reach.

The telescope is named ASTHROS, an acronym for Astrophysics Stratospheric Telescope for High Spectral Resolution Observations at Submillimeter-wavelengths. Far-infrared wavelengths can't be seen with the human eye but can illuminate the density and speed of gas in parts of space where stars form.

The balloon will hover "well below the boundary of space" at an altitude of about 130,000 feet -- still, nearly 25 miles high. The team can control the telescope from the ground and download its data for immediate analysis, the lab said.

"We will launch ASTHROS to the edge of space from the most remote and harsh part of our planet," said Jose Siles, an engineer at the Jet Propulsion Laboratory and the ASTHROS project manager. "If you stop to think about it, it's really challenging, which makes it so exciting at the same time."

The tools dangling below the balloon will study star formation and a process called "stellar feedback."

When supernovas explode, they eject material back into space. These "violent outbursts" can either send material flying and stop stars from forming or cause material to accumulate and speed up the star formation process. Without stellar feedback, according to the Jet Propulsion Lab, all the interstellar dust and gas in the Milky Way Galaxy would've accumulated into stars.

"I think it's understood that stellar feedback is the main regulator of star formation throughout the universe's history," said Jorge Pineda, principal investigator of ASTHROS. "Computer simulations of galaxy evolution still can't quite replicate the reality that we see out in the cosmos. The nitrogen mapping that we'll do with ASTHROS has never been done before, and it will be exciting to see how that information helps make those models more accurate."

So to learn more about the process, ASTHROS will hit two targets in the Milky Way galaxy, both "star-forming regions" where the instrument will create what the lab says is the first 3D printed map of the gas in those regions. Those maps will inform computer simulations of the galaxy's evolution, the lab said.

Its other two targets are Messier 83, a galaxy about 15 million lightyears from Earth and one of the brightest galaxies, and TW Hydrae, a star with a protoplanetary disk, or a disc of dust and gas where planets may be forming.

When ASTHROS has completed two to three loops around the South Pole in three to four weeks, its operators on the ground will separate the gondola from the balloon. The gondola and instruments will parachute back down to Earth, where they can be reused for future missions.