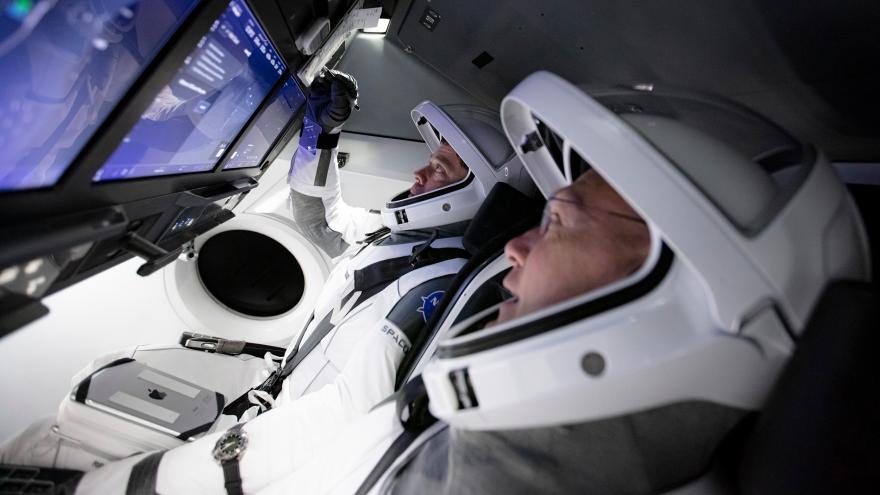 (CNN) -- Next month, human spaceflight will return to US soil after nearly a decade.

NASA announced Friday that SpaceX will launch astronauts Doug Hurley and Bob Behnken on a mission to the International Space Station on Wednesday, May 27 at 4:32 p.m. ET. Liftoff will be from Florida's Kennedy Space Center — marking the first time a rocket will carry astronauts into orbit from the United States since NASA's Space Shuttle program retired in 2011.

It will also be the first crewed mission for SpaceX since its founding 18 years ago.

Because of Covid-19, however, there will be no crowds of spectators lining the beaches and viewing sites along Florida's Space Coast to watch the craft hurtle toward the ISS, as they have for the launch of nearly every crewed US mission since Alan Shepard became the first American to reach space in 1961.

Only a limited number of reporters will be allowed on site, and NASA said it will not hostany members of the public.

"This has become yet another footnote in the story of coronavirus and its impact on America," said Dale Ketcham, a vice president at Space Florida, a local industry group. "But NASA is continuing to press ahead with Commercial Crew because there is a profound obligation to keep space station operational."

NASA has shut down many of its activities in response to coronavirus, but it has maintained all ISS-related activity. NASA astronauts Jessica Meir and Andrew Morgan returned from their stay on the space station aboard a Russian spacecraft on Friday.

The ISS has continually hosted a rotating crew of astronauts from all over the world since 2000. The United States and Russia are the space station's primary operators, but since 2011, Russia has been the only country capable of transporting astronauts to and from the ISS.

NASA has paid up to $86 million per seat and about $55.4 million on average to fly US astronauts aboard Russia's Soyuz spacecraft, according to the space agency's inspector general.

Years ago, NASA asked the private sector to develop a new generation of crew-worthy spacecraft. SpaceX was allotted $2.6 billion and Boeing was awarded $4.2 billion in 2014, and the space agency initially predicted their vehicles would be ready to fly astronauts by 2017. But development of both spacecraft took years longer than expected.

The companies were neck-in-neck, but SpaceX emerged as the clear leader after completing a successful test of its Crew Dragon spacecraft's emergency abort system in January. Less than a month earlier, Boeing's Starliner spacecraft suffered major setbacks during an uncrewed orbital flight test. The company has since said it will repeat that test mission in the fall.

The Crew Dragon mission in May, dubbed Demo-2, will be the final test for Crew Dragon before NASA transitions to operational crewed flights to the space station using the spacecraft.

Hurley and Behnken are both former military test pilots and veteran astronauts who previously flew on space shuttle missions.

After launching on May 27, they will spend as many as 110 days in space, though NASA said the "specific mission duration will be determined once on station based on the readiness of the next commercial crew launch."

They'll return on the Crew Dragon capsule, which will navigate back through Earth's atmosphere and splash down just off Florida's Atlantic Coast.

Though the US space agency paid the companies to develop their vehicles, Starliner and Crew Dragon are privately owned and operated. Unlike previous human spaceflight programs, NASA is essentially a customer of the companies.

SpaceX and Boeing have both announced plans to fly tourists aboard the spacecraft alongside NASA astronauts.