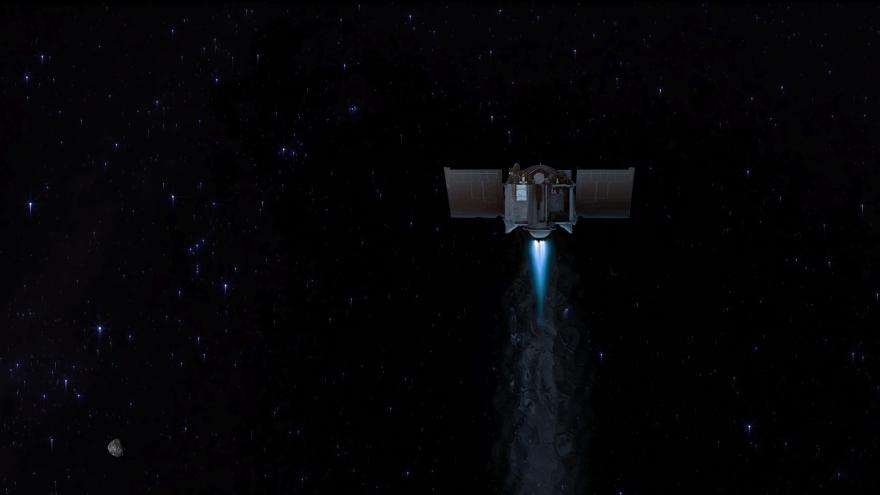 (CNN) -- After spending two-and-a-half years together, a NASA spacecraft bid farewell to its asteroid companion Monday and began the long journey back to Earth.

The OSIRIS-REx spacecraft is NASA's first asteroid sample return mission, and it carries a generous amount of material collected from the near-Earth asteroid Bennu.

It's the culmination of years of hard work by the mission's team, which was fueled by a common sense of purpose and unity, said Dante Lauretta, the mission's principal investigator at the University of Arizona. Although the team is thrilled to examine the asteroid sample once it returns to Earth, they're bittersweet to be leaving Bennu after spending so much time studying the asteroid up close.

"I'm more emotional than I expected to be," Lauretta said. "It's an amazing sense of pride and accomplishment."

At 4:16 p.m. ET, the OSIRIS-REx control room at Lockheed Martin, in Littleton, Colorado, received a signal from the spacecraft that it had fired thrusters to remove itself from an established orbit around Bennu.

This thruster burn lasted for seven minutes. This departure sequence was a big step for the spacecraft. The thrusters had to shiftthe spacecraft's velocity by 595 miles per hour (958 kilometers per hour) to put OSIRIS-Rex on a course to catch up with Earth. The spacecraft is now moving away from Bennu at over 600 mph.

The spacecraft will swing by Earth on September 24, 2023 and drop the sample, containing 2.1 ounces of material from the surface of Bennu, at the Utah Test and Training Range. If the spacecraft is still in good health, it will then start on a new expedition to study other asteroids.

"It's both exciting and bittersweet," said Sandy Freund, mission operations program manager of the Lockheed Martin Mission Support Area. "I can't wait to see what we learn from the sample when it returns to Earth. Yet, at the same time, we've now said goodbye to this asteroid that we've gotten to know so well over the past couple of years."

Currently 291 million miles away from Earth, OSIRIS-REx needs to catch up with our planet -- and that takes time. Over the next nearly two-and-a-half years, the spacecraft will circle the sun twice and travel 1.4 billion miles so that it can rendezvous with Earth and return the sample.

Since launching from Cape Canaveral in September 2016, the mission -- which stands for Origins, Spectral Interpretation, Resource Identification, Security, Regolith Explorer -- has achieved a number of historic milestones.

It was the first NASA mission sent to a near-Earth asteroid and performed the closest orbit of a planetary body by a spacecraft. Bennu became the smallest object ever orbited by a spacecraft.

Once OSIRIS-REx arrived for its first close look at Bennu in December 2018, the spacecraft surveyed the asteroid in its entirety to determine the best location to collect a sample.

The unprecedented close views of Bennu afforded the mission team insights about the asteroid, which included the discovery of water ice locked within Bennu's rocks and carbon in a form that is largely associated with biology.

They also witnessed particles from the asteroid releasing into space. And then there was TAG, the historic Touch-and-Go sample collection event that occurred on October 20.

Along the way, there were numerous challenges that threatened the success of the mission, including the fact that the sample collection head on the spacecraft collected so much material that the container couldn't seal properly, leaking precious asteroid material into space.

The OSIRIS-REx team was able to meet and overcome these challenges. Now the spacecraft is slated to return the largest sample collected by a NASA mission since lunar rocks were brought back by Apollo astronauts.

The team was also able to organize a final flyby of Bennu by the spacecraft in April, allowing for the chance to see how OSIRIS-REx disturbed and altered the surface of the asteroid during the collection event. The before and after photos showed some intriguing differences created by the sample collection and the firing of the spacecraft's thrusters after it pushed away from the asteroid.

The samples will reveal information about the formation and history of our solar system as well as the role of asteroids in helping develop habitable planets like Earth. Scientists believe that asteroids like Bennu crashed into Earth early during its formation, delivering elements like water.

It's also crucial to understand more about the population of near-Earth asteroids like Bennu that may be on an eventual collision course with Earth. A better grasp of their composition and orbits is key in predicting which asteroids may have the closest approaches to Earth and when, as well as developing methods of deflecting these asteroids.

This is something NASA will test out with the DART mission later this year.

The Double Asteroid Redirection Test is the agency's first flight demonstration for planetary defense. The mission's goal is to shift an asteroid's orbit by using a spacecraft to impact the double asteroid Didymos in an attempt to change the speed of its orbit.

After the Bennu sample lands on Earth, it will be brought to a new lab currently in development at NASA's Johnson Space Center in Houston. The sample will be divided up and sent to laboratories around the globe -- and 75% of it will remain pristine in storage so future generations with better technology can learn even more than what is currently possible.