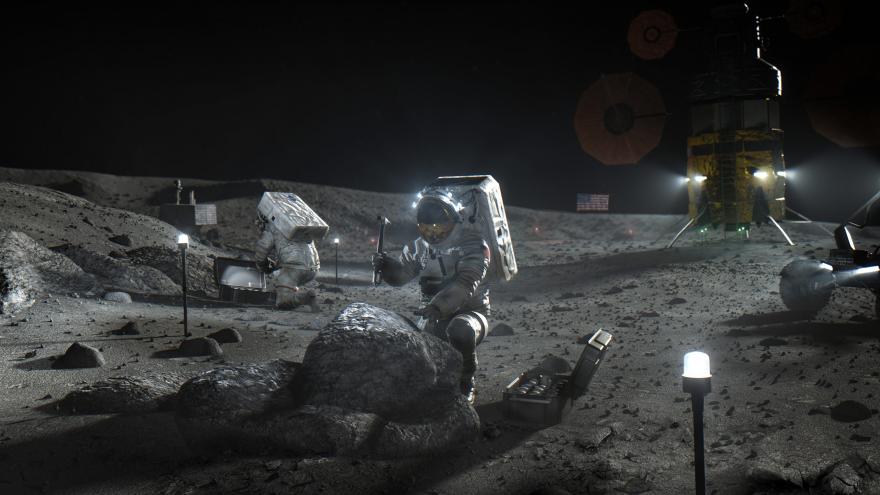 (CNN) -- The highly anticipated landing of the first woman and the first person of color on the moon will have to wait.

Due to a delay caused by litigation with Blue Origin, as well as other factors -- including the pandemic -- the earliest return of NASA boots on the lunar surface through the Artemis program won't take place in 2024 as expected, said NASA Administrator Bill Nelson on Tuesday.

"We've lost nearly seven months in litigation and that likely has pushed the first human landing likely to no earlier than 2025," Nelson said during a press conference.

And the Chinese space program is increasingly capable of landing taikonauts on the moon much earlier than originally expected, Nelson said, although he did not identify the original expectation. It's highly possible that China could land on the moon before a return by US astronauts, Nelson said.

"We are facing a very aggressive and good Chinese space program," he said. "This has happened in the last few years that we've seen them achieve quite a number of things. They have stated that they are going to the south pole of the moon. It's the position of NASA, and I believe the United States government, that we want to be there first back on the moon after over a half century. We are going to be as aggressive as we can be in a safe and technically feasible way to beat our competitors with boots on the moon."

The Blue Origin litigation has its roots in a choice made by NASA this year.

Jeff Bezos and Elon Musk each want their own companies to be at the center of NASA's plans to return astronauts to the moon. But NASA only has enough money for one of them, and it went with Musk's SpaceX to build the human landing system. Blue Origin, Bezos' space company, has fought that decision ever since, saying NASA unfairly favored SpaceX and that the space agency would be better served by funding both SpaceX and Blue Origin's plans to develop vehicles capable of landing on the moon.

A decision by the Court of Federal Claims on Friday, which ruled in favor of NASA, means that the Artemis program's progress can continue. During litigation, NASA was prevented by law from having any contact with SpaceX regarding their development of a human landing system for Artemis astronauts. However, SpaceX has continued to develop the lander on their own without any payments from NASA.

"But our team still need time to work through the specifics," Nelson said. And there is a lot of work to be done.

Other factors leading to the 2025 delay include a lack of funding for the development of the human landing system, and "the Trump administration target of 2024 human landing was not grounded in technical feasibility," Nelson said.

In order to meet the goals of the Artemis program, Nelson announced several changes Tuesday, including the need for a significant increase in funding beginning with the 2023 budget. This will lay the foundation for more than 10 future lunar landings.

Nelson also shared that NASA is committed to an updated Orion development cost of $9.3 billion, up from the initial $6.7 billion from fiscal year 2012, when a model of Orion was first tested, through the first crewed flight test no later than May 2024.

Weeks ago, NASA had announced that the launch of Artemis I, an uncrewed mission serving as the first step of NASA's program to return humans to the moon, has been delayed until at least February.

During the flight, the uncrewed Orion spacecraft will launch atop the SLS rocket to reach the moon and travel thousands of miles beyond it -- farther than any spacecraft intended to carry humans has ever traveled. This mission is expected to last for a few weeks and will end with Orion splashing down in the Pacific Ocean.

The mission was originally scheduled to launch in November, but delays due to the pandemic, storms like Hurricane Ida, and other factors have drawn out the mission timeline.

After the uncrewed Artemis I flight, Artemis II will be a crewed flyby of the moon and Artemis III will return astronauts to the lunar surface at the south pole, putting a woman and person of color there for the first time. The timeline for the subsequent mission launches depends on Artemis I.

The schedule changes will also result in a delayed launch of Artemis II, the first crewed mission, to May 2024, Nelson said on Tuesday. Previously, Artemis II was scheduled for April 2023.

Nelson also suggested that the crewed landing will be preceded by an uncrewed landing on the moon, but did not say when this would occur.

However, these changes should not impact other lunar surface activities planned through the late 2020s, Nelson said.

"We are meeting with SpaceX currently to understand the impact of delays on the entire development schedule," said Jim Free, associate administrator for Exploration Systems Development at NASA.

When questioned about the wide gap between Artemis mission launches, Free addressed the factors that dictate this timeline.

The first flight of Artemis I will help teams understand how the spacecraft performs. Lessons learned from Artemis I may require operational changes after the first flight. Outfitting for Artemis II will require adding all of the components that allow Orion to safely carry the crew, including life support systems. And Artemis III will need to dock with the Gateway, an orbiting outpost between Earth and the moon. The SpaceX-designed human landing system will then carry astronauts to the lunar surface.

Artemis has been plagued by a multitude of delays, including the need for new spacesuits that astronauts can wear on the lunar surface.

Nelson acknowledged that the Artemis program is an ambitious one, similar to Apollo but much larger in scope.

"Artemis missions will turn science fiction into science fact," Nelson said. "We will make new discoveries. We will advance technologies and we'll learn to live and work on another world. And we'll do this all the while inspiring the next generation of scientists, engineers, explorers and other STEM professionals, the Artemis generation."

The next step for the Artemis program beyond the moon is landing humans on Mars. The technology tested during and lessons learned from long-duration lunar missions and building a lunar habitat will provide the road map to the red planet, Nelson said.