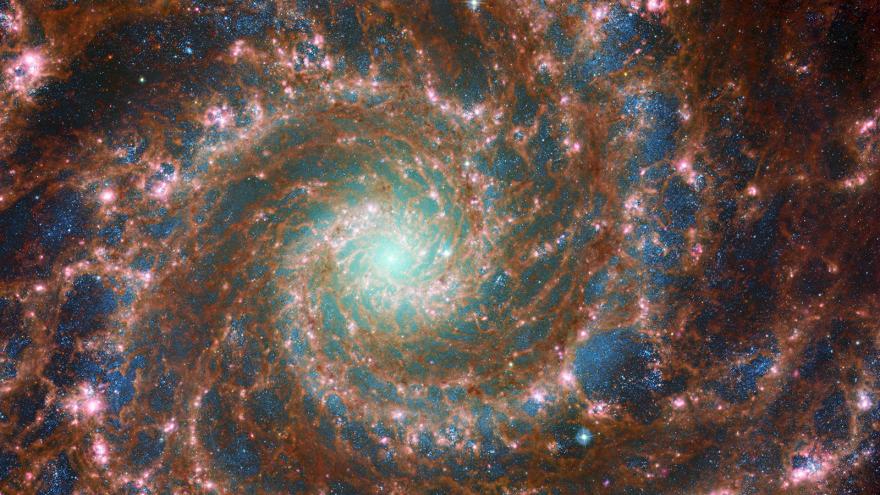 (CNN) -- Stunning new images produced by the Hubble Telescope and the James Webb Telescope showcase the Phantom Galaxy, a spiral of solar systems 32 million light-years away from Earth.

The galaxy is located in the constellation Pisces, according to the European Space Agency, which collaborates with NASA on both the Hubble Telescope and the James Webb Telescope.

The Phantom Galaxy, formally known as M74, is a kind of spiral galaxy known as a "grand design spiral." This means that it has well-defined spiral arms, visibly winding out from the center in the newly released images.

The images were created using data from both the Hubble Telescope and the Webb Telescope. Webb detected "delicate filaments of gas and dust" in the galaxy's spiral arms, according to ESA. The images also provide a clear look at the nuclear star cluster at the galaxy's center, unclouded by gas.

The Webb telescope also used its Mid-InfraRed Instrument (MIRI) to examine the Phantom Galaxy as part of a project to understand the earliest phases of star formation, ESA noted.

While Webb is best at observing infrared wavelengths of light, Hubble has particularly sharp vision at ultraviolet and visible wavelengths, according to the agency. This allowed it to reveal particularly bright areas of star formation, known as HII regions, in the Phantom Galaxy images.

The combination of data from both telescopes allowed scientists to gain an even deeper understanding of the Phantom Galaxy -- and to create spectacular images of the cosmos.