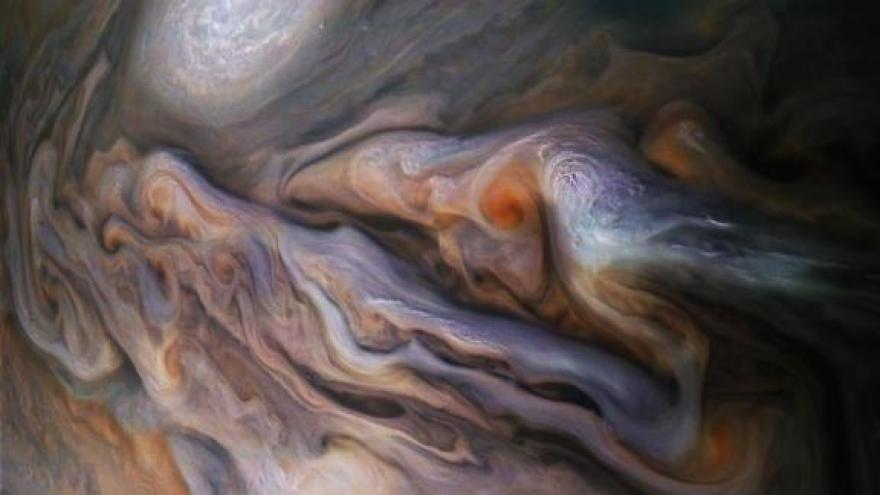 (CNN) -- The largest moon in our solar system is preparing for its first close-up in more than 20 years on Monday.

NASA's Juno mission has been observing Jupiter and its moons since July 2016, and now Juno will come within 645 miles (1,038 kilometers) of Ganymede's surface.

It's the closest a spacecraft has been to the moon since the Galileo spacecraft made its approach in May 2000. At 3,270 miles across (5,262.4 kilometers), this giant moon is larger than the planet Mercury.

Cameras aboard Juno will capture images of Ganymede while other instruments can gather data that help scientists learn more about the moon's composition, including its ice shell.

"Juno carries a suite of sensitive instruments capable of seeing Ganymede in ways never before possible," said Scott Bolton, Juno's principal investigator at the Southwest Research Institute in San Antonio, in a statement.

"By flying so close, we will bring the exploration of Ganymede into the 21st century, both complementing future missions with our unique sensors and helping prepare for the next generation of missions to the Jovian system -- NASA's Europa Clipper and ESA's (European Space Agency's) JUpiter ICy moons Explorer (JUICE) mission."

The moon is named for a cupbearer to the ancient Greek gods. In addition to being the largest natural satellite in our solar system, Ganymede is also the only moon to have a magnetic field. This causes auroras to glow around the moon's north and south poles.

Ganymede has an iron core covered by a layer of rock that is topped off with a thick ice shell. It's possible that there is a subsurface ocean and astronomers discovered evidence of a thin oxygen atmosphere on the moon in 1996 using the Hubble Space Telescope. This atmosphere is too thin to support life.

Bright regions dot the lunar surface. These ridges appear like scars, suggesting dramatic change over the course of Ganymede's history.

"Ganymede's ice shell has some light and dark regions, suggesting that some areas may be pure ice while other areas contain dirty ice," Bolton said. Juno's Microwave Radiometer "will provide the first in-depth investigation of how the composition and structure of the ice varies with depth, leading to a better understanding of how the ice shell forms and the ongoing processes that resurface the ice over time."

The ESA's JUICE mission, which will be the first spacecraft to orbit a moon other than Earth's when it arrives in 2032, will study Ganymede's ice shell as well.

On Monday, Juno will use three cameras, including its navigation camera, to capture as much as possible during the flyby, including the highly energetic radiation around Ganymede.

The flyby will be quick, so there won't be time to gather many images. But the ones collected during this flyby can be used in comparison with those taken by the Voyager and Galileo missions.

"Things usually happen pretty quick in the world of flybys, and we have two back-to-back next week. So literally every second counts," said Matt Johnson, Juno mission manager at NASA's Jet Propulsion Laboratory in Pasadena, California, in a statement.