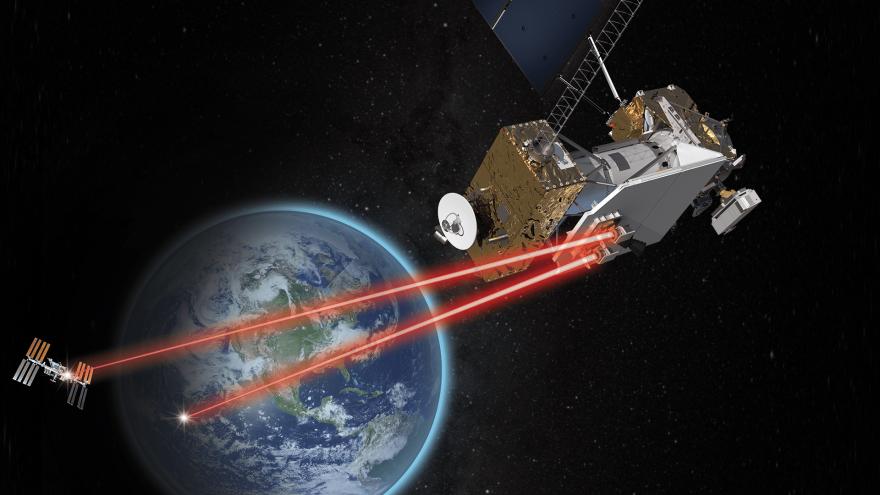 (CNN) -- The use of invisible lasers in space may sound like something from science fiction, but it's real.

NASA's Laser Communications Relay Demonstration could revolutionize the way the agency communicates with future missions across the solar system.

These lasers could lead to more high-definition videos and photos from space than ever before, according to the agency.

The mission launched Tuesday at 5:19 a.m. ET as a payload aboard the US Department of Defense's Space Test Program Satellite 6 from Cape Canaveral, Florida. The launch was rescheduled from Sunday after a leak was discovered in the Rocket-Propellant-1 ground storage system. This was repaired prior to Tuesday's launch.

Since 1958, NASA has used radio waves to communicate with its astronauts and space missions. While radio waves have a proven track record, space missions are becoming more complex and collecting more data than before.

Think of infrared lasers as the optical communication version of high-speed internet, as opposed to frustratingly slow dial-up internet. Laser communications will send data to Earth from an orbit synchronous with the Earth's rotation, 22,000 miles (35,406 kilometers) above Earth's surface at 1.2 gigabits-per-second, which is like downloading an entire movie in under a minute.

This will improve data transmission rates 10 to 100 times better than radio waves. Infrared lasers, which are invisible to our eyes, have shorter wavelengths than radio waves, so they can transmit more data at once.

Using the current radio wave system, it would take nine weeks to send back a complete map of Mars -- but lasers could do it in nine days.

The Laser Communications Relay Demonstration is NASA's first end-to-end laser relay system that will send and receive data from space to two optical ground stations in Table Mountain, California, and Haleakalā, Hawaii. These stations have telescopes that can receive the light from the lasers and translate it into digital data. Unlike radio antennas, laser communication receivers can be up to 44 times smaller. Because the satellite can both send and receive data, it's a true two-way system.

The one disruption to these ground-based laser receiversis atmospheric disturbances, like clouds and turbulence, which can interfere with laser signals traveling through our atmosphere. The remote locations for the two receivers were chosen with this in mind since both typically have clear weather conditions at high altitudes.

Once the mission arrives in orbit, the team at the operations center in Las Cruces, New Mexico, will activate the Laser Communications Relay Demonstration and prepare it to send tests to the ground stations.

The mission is expected to spend two years conducting tests and experiments before it begins supporting space missions, including an optical terminal that will be installed on the International Space Station in the future. It will be able to send data from science experiments on the space station to the satellite, which will relay them back to Earth.

The demonstration acts as a relay satellite, which eliminates the need for future missions to have antennas with a direct line-of-sight on Earth. The satellite could help reduce the size, weight and power requirements for communications on future spacecraft -- although this mission is about the size of a king mattress.

This means that future missions could be less expensive to launch and would have room for more science instruments.

Other missions currently in development that could test laser communication capabilities include the Orion Artemis II Optical Communications System, which will allow for an ultra-high-definition video feed between NASA and Artemis astronauts venturing to the moon.

And the Psyche mission, which launches in 2022, will reach its asteroid destination in 2026. The mission will study a metallic asteroid that is more than 150 million miles (241 million kilometers)away and test its Deep Space Optical Communication laser to send data back to Earth.