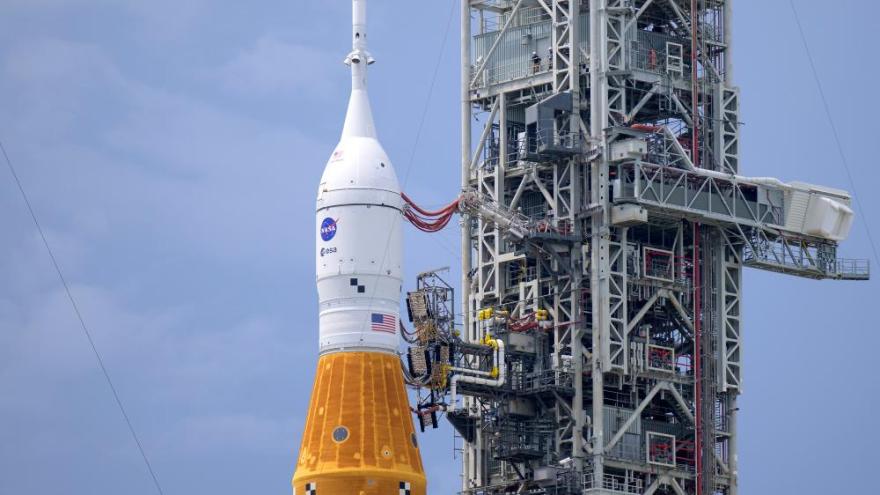 NASA initiates two-day countdown for Artemis I mission and pictured, NASA's Space Launch System rocket with the Orion spacecraft aboard on August 26, at NASA's Kennedy Space Center in Florida.

(CNN) -- In just around 46 hours, the Artemis I rocket is set to take off for an uncrewed flight around the moon -- and NASA is counting down the minutes.

The countdown started once the launch teams arrived at their stations at the Kennedy Space Center in Florida. The launch timeline has been shaped by lessons learned from the wet dress rehearsal, conducted on August 22. The rehearsal simulated almost every part of the launch, including loading the spacecraft with jet fuel -- but stopped short of actually lifting off.

The first orders of business are to fill the water tank for the sound suppression system, prepare the liquid oxygen and liquid hydrogen systems, power up the Orion spacecraft if it's not already powered up, power up the interim cryogenic propulsion stage, power up the core stage, and prepare the four RS-25 engines, according to a launch timeline on NASA's website.

The Artemis I rocket is expected to launch from the Kennedy Space Center on Monday between 8:33 a.m. and 10:33 a.m. ET, assuming the weather is favorable. The stack, consisting of the Space Launch System rocket and Orion spacecraft, stands 322 feet tall (98 meters tall).

The Artemis I mission is the first step in NASA's plan to return humans to the moon, 50 years after the last manned trip to the moon. If all goes according to plan, the spacecraft will orbit around the moon, traveling 1.3 million miles over just 42 days, before splashing down off the coast of California in October.

The launch will set the stage for NASA's goal to land the first woman and first person of color on the moon by 2025 -- and eventually, tackle human exploration of Mars.