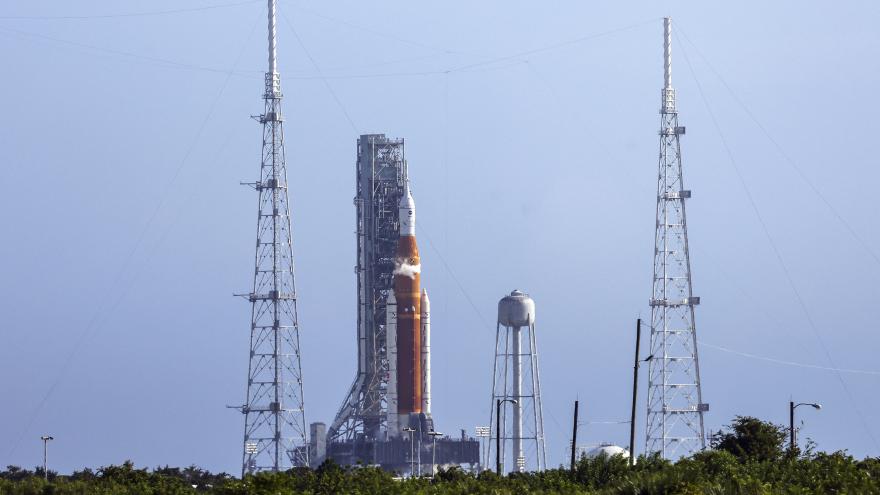 (CNN) -- NASA has two new dates in mind — September 23 or September 27 — for the next attempt at launching its massive new moon rocket on an uncrewed test mission. But there are still several things that could stand in the way of getting the Artemis I mission off the ground, any of which could push the launch date back further.

NASA is trying to work through a leaky fuel problem with the rocket, called the Space Launch System or SLS. During the last launch attempt at the Kennedy Space Center in Florida on Saturday, September 3, the rocket sprung a big leak as it was being fueled up with super-chilled liquid hydrogen.

And while the rocket is still on the pad, NASA is looking to troubleshoot that issue by repairing and replacing some seals before running tests to make sure all the leaks are plugged, NASA officials said at a Thursday press conference.

It's not yet clear how long that will take.

Then, there's the issue with certification. The US Space Force, an arm of the military, still oversees all rocket launches from the United States' East Coast, including NASA's Florida launch site, and that area is known as the "Eastern Range."

The officials at the range are tasked with making sure there's no risk to people or property with any launch attempt. And that means the Eastern Range also must give NASA the thumbs up that the rocket's Flight Termination System — a system that will essentially destroy the rocket mid-air if it veers off course and starts heading in a populated direction — is ready to fly.

That system relies on batteries, however, that, under current rules, must be recharged at a nearby indoor facility before the newly proposed launch dates arrive.

NASA is hoping to get a waiver on that rule. But it's not yet clear when or if that request will be granted. If NASA does not get that waiver approval, the SLS rocket will have to be rolled off the pad and back into the nearby Vehicle Assembly Building, triggering more delays.

"If they decide that is not the right thing to do, we obviously will support that and stand down and look for our next launch attempt," Jim Free, associate administrator for NASA's Exploration Systems Development Mission Directorate, said at the Thursday press conference.

"But we still will press with the tanking test," he said, referring to the tests NASA plans to run to fix the hydrogen leaks while the rocket is still on the pad.

The Space Force's Eastern Range said in a statement only that it "will review NASA's request." It declined to share details on timing.

On Thursday, NASA did give some insight into what it's discovered about the leak issue, however. The space agency had already revealedthat there was an "inadvertent pressurization of the hydrogen line," putting it under 60 pounds per square inch of pressure rather than the 20 pounds per square inch they'd hoped, Michael Sarafin, Artemis Mission Manager, said Saturday.

"Our management team apologize to [the operator in charge of overseeing the process] because we had made some manual procedure changes between the attempt on Monday and attempt on Saturday," Free said. "We practiced it during the week but they'd only had a couple of chances. So we didn't as a leadership team, put our our operators in the best place we could have we rely really heavily on our credit team."

That overpressurization is definitely something NASA wants to avoid, according to Free. NASA is looking for a "kinder and gentler, if you will, loading process."

For now, there's still a waiting game and a lot of "ifs" surrounding the timeline for the Artemis I launch. The ultimate goal of this project is to get the SLS rocket to orbit and deploy the Orion capsule, which is built for astronauts but will fly empty for this test mission. The capsule will go on to orbit the moon before making the 239,000 mile trek back home.

The Artemis I mission is just the beginning of a program that will aim to return humans to the moon and eventually land crewed missions on Mars. Nelson said that the issues during the first two scrubs have not caused any delays to future Artemis program missions.