NASA astronauts conduct the second spacewalk of the year 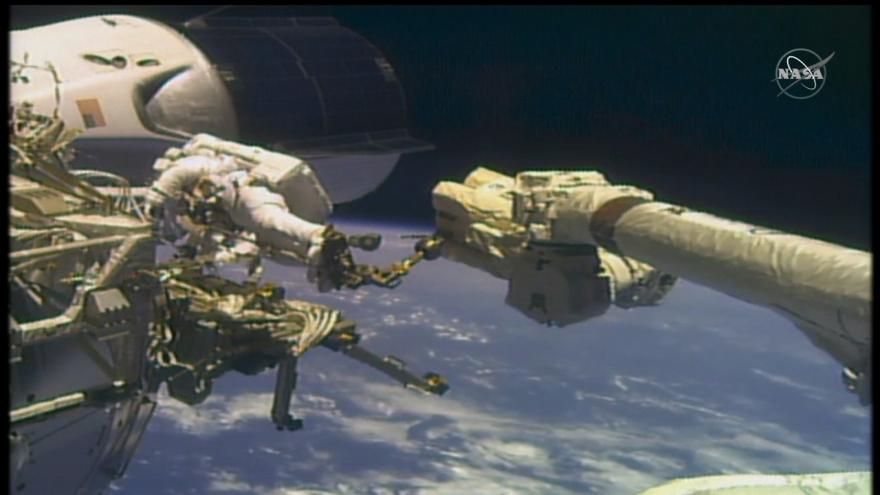 Although the astronauts began the spacewalk later than expected at 7:56 a.m. ET, they worked through their list of tasks quickly and even accomplished some "get-ahead" items that were planned for future spacewalks.

The spacewalk ended at 1:16 p.m. ET and lasted for five hours and 20 minutes.

This is the second spacewalk for the duo in just a matter of days.

It was the second spacewalk experience for Glover, who is a few months into his first spaceflight on the station.

This was the fourth spacewalk for Hopkins, who previously completed two spacewalks during his first six-month stay on the space station from September 2013 to March 2014.

This was the 234th spacewalk in support of the space station's assembly, maintenance and upgrades.

The astronauts installed the final lithium-ion battery adapter plate and connected it to the battery, which was installed robotically ahead of the spacewalk. This installation wraps up work to complete the replacement of aging nickel-hydrogen batteries outside the station that began in January 2017.

The new batteries are more efficient and provide the space station with an improved power capacity.

Glover and Hopkins then moved to the opposite side of the station to focus on other upgrades. Their work included replacing an external standard camera with a new high-definition camera on the Destiny laboratory, and replacing camera and light assembly components needed for the Japanese robotic arm's camera system, located outside of the Japanese Kibo module. They also routed some ethernet cables.

Hopkins, Glover, NASA astronaut Shannon Walker and Japan Aerospace Exploration Agency astronaut Soichi Noguchi flew to the station in November aboard the SpaceX Crew Dragon Resilience spacecraft in mid-November. They joined NASA astronaut Kate Rubins and Russian cosmonauts Sergey Ryzhikov and Sergey Kud-Sverchkov, who were already on the station after launching in October.

Rubins and Noguchi had the task of operating the robotic arm from inside the space station to assist the astronauts as they worked outside.

There are more spacewalks planned for the crew near the end of February and beginning of March.

Rubins and Noguchi will conduct the fourth spacewalk to continue upgrades for the space station.

During these long spacewalks, the astronauts go through alternating cycles of day and night every 45 minutes, operating against the hot, bright light of the sun as well as the cold darkness of space. This happens because the space station is orbiting the Earth at 17,500 miles per hour.

While the astronauts don't feel the direct impacts of extreme cold and heat, there is the potential for a chill, so there are heaters installed in the astronauts' gloves to keep their hands warm, said Vincent LaCourt, spacewalk flight director at NASA for the February 1 spacewalk.