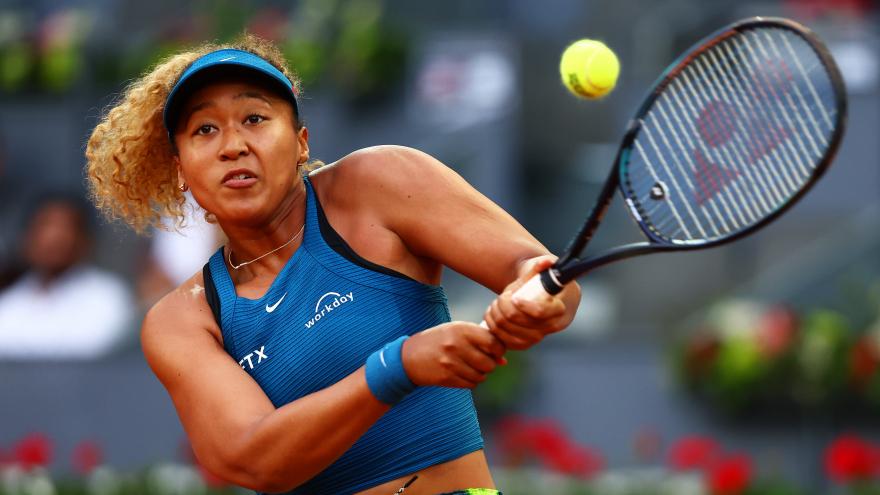 (CNN) -- Four-time tennis grand slam champion Naomi Osaka returned to the French Open to meet the media on Friday -- a year after her sudden withdrawal from the major tournament.

Twelve months on from refusing to speak to the media during the event, citing mental health reasons, Osaka met the press with reflection, humor and caution.

With a smile on her face, Osaka told reporters she was "worried about this press conference because I knew I'd get a lot of questions about this."

Last year, Osaka was visibly stressed and emotional while addressing the media during an obligatory news conference at Roland Garros.

The former world number one subsequently pulled out of the 2021 French Open and revealed she had "suffered long bouts of depression" since winning her first major championship in 2018.

"Of course, I also didn't like how I handled the whole situation but I was worried that there were people that I offended in some way and I would bump into them," said Osaka on Friday.

'For the most part I think I'm okay'

Osaka reflected on what transpired in 2021 and revealed she was readying herself for how people might react to her return.

"I think for me where I am right now, I wouldn't want to say that it hasn't left my mind. Of course, I am still thinking about it.

Two months ago, Osaka was heckled by a spectator in the crowd during a match at Indian Wells in California. "Naomi, you suck," the spectator appeared to yell out. The comment brought the Japanese superstar to tears on the court.

"I'm like kind of also prepping just in case I go on the court and some fan says something like in Indian Wells. Yeah, for the most part I think I'm okay."

An unseeded Osaka faces No. 27 seed Amanda Anisimova on Sunday in the first round of the 2022 French Open.