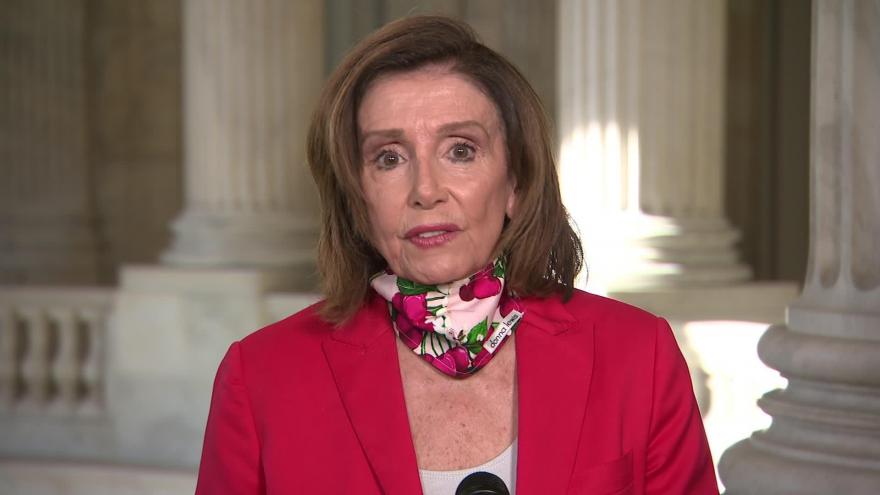 House Speaker Nancy Pelosi defended her decision along with Senate Majority Leader Mitch McConnell to decline an offer from the Trump administration to deploy rapid coronavirus testing capabilities to Capitol Hill and said that tests should go to Americans on the front lines of the crisis.

(CNN) -- House Speaker Nancy Pelosi on Monday defended her decision along with Senate Majority Leader Mitch McConnell to decline an offer from the Trump administration to deploy rapid coronavirus testing capabilities to Capitol Hill and said that tests should go to Americans on the front lines of the crisis.

Asked by CNN's Wolf Blitzer on "The Situation Room" why she didn't accept the tests, Pelosi responded, "Because they don't have them."

"The fact is that we have said that the tests should go to those on the frontline who had direct communication with or are contending with this," Pelosi said. "Our capital (physician) has said we don't need to have them in terms of the exposure that we have. The testing organization said to us you're not next. We can bump you in line, push other people out of the way, but you're not next in terms of essential workers for this."

In a rare joint statement, McConnell and Pelosi said on Saturday that they would "respectfully" decline an offer from the administration to deploy rapid testing capabilities to the Hill ahead of senators' return to Washington on Monday.

Instead, the two congressional leaders said they want "to keep directing resources to the front-line facilities" dealing with the pandemic and that lawmakers will use "current testing protocols that the Office of the Attending Physician has put in place until these speedier technologies become more widely available." President Donald Trump responded to their stance over the weekend in a tweet chalking up the decision to politics.

Pelosi said Monday that "our first responders and the rest, they should be getting this before we do. I don't know that there's one member of Congress who says I want to have a test before my constituent who really needs one gets one."

The Senate reconvened in Washington on Monday with Senate Democrats voicing frustration over the decision to bring the chamber back into session amid the pandemic and without imminent plans to take up further relief legislation. The full House of Representatives is not scheduled to come back into session this week.

Congressional Democrats have repeatedly argued that testing capacity must be expanded amid persistent reports of shortages and difficulty accessing tests.

House Minority Leader Kevin McCarthy on Monday split with Pelosi and McConnell over the decision to decline testing. "I do disagree about the testing," McCarthy said during an interview with Politico. "As we open up, we cannot assume that there will not be a flare-up somewhere."

The California Republican said he wants to be prepared, because the Capitol is like a "mini-city," and congressional leaders should want to make sure it's functioning. He said he wouldn't want members to return "all at once," and would like to have testing capacity to ensure the press is also healthy and able to continue to report on Congress.

"I do believe it will be critical to have the testing here, because there will be a flare-up," McCarthy added. "Remember how many people from other parts of the country come to this location."