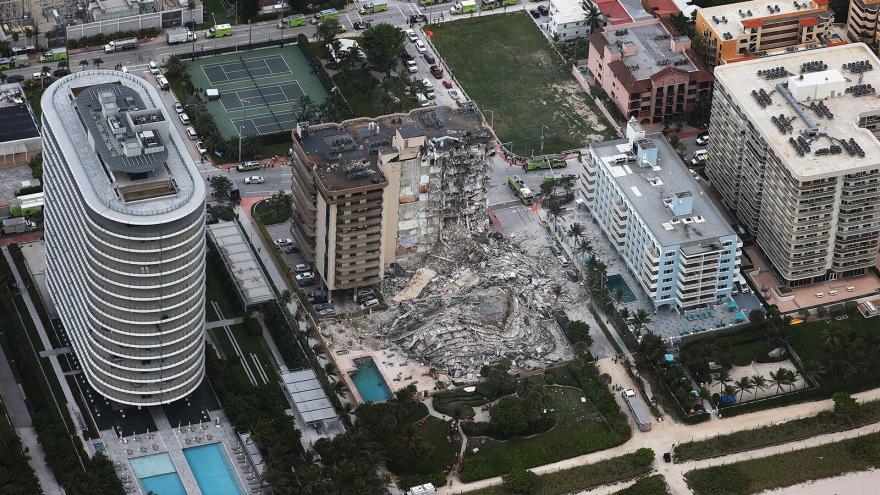 In this aerial view, search and rescue personnel work after the partial collapse of the 12-story Champlain Towers South condo building.

(CNN) -- The collapse of a high-rise condo tower in South Florida early Thursday morning has left at least four people dead and 159 more currently unaccounted for. Now, as the search for survivors continues, a critical question looms: What caused the building to fall?

Officials are promising an urgent inquiry as engineers have said it is impossible, at this stage, to pinpoint a precise reason. Local officials familiar with the Champlain Towers South condo complex, which is only four decades old, have repeatedly shot down rumors that it was in any unusual state of disrepair. But a new report surfaced overnight and an older study of the building and surrounding areas have begun to suggest warning signs were there to see.

An attorney for the building's condominium association, Kenneth Direktor, warned against early speculation. The building, he told CNN, had been subject to a series of inspections "over the last several months" as part of its milestone 40-year safety certification process.

"Nothing like this was foreseeable," Direktor said. "At least it wasn't seen by the engineers who were looking at the building from a structural perspective."

The only repairs that recently took place, he added, were work on the roof.

At a news conference on Thursday, Surfside, Florida, Mayor Charles W. Burkett dismissed the suggestion that the rooftop repairs should have been a red flag. (It is unclear if the engineer's inspection process located any other concerns or recommended any other work).

"There's no reason for this building to go down like that unless someone literally pulls out the supports from underneath, or they get washed out, or there's a sinkhole or something like that because it just went down," Burkett said. "There was roof work being done, but there's roof work being done on buildings all the time."

Experts who observed footage of the disaster say the footage provided some baseline understanding of what happened, but little more.

"This collapse is a classic column failure. Which means the building itself was supported by a series of pillars. If the pillars fail, everything fails," said Kit Miyamoto, a structural engineer and California Seismic Safety Commission chairman.

Determining what set off that failure is a test that awaits federal, state and local engineers.

"The building was in the condition you would expect for a building that is 40 years old, that is located on the Atlantic Ocean," Direktor said.

But that proximity to the sea -- and the saltwater coming up off the ocean -- has been a recurring issue for experts trying to make sense of the disaster.

Both Miyamoto and Greg Batista, a specialist in concrete repair projects, made note of the building's beachfront location. The potential for spalling -- a dangerous flaw caused by the rusting of reinforced steel inside concrete -- is greater when a structure, like the condo in Surfside, abuts the sea.

A structural field survey report completed nearly three years before the collapse raised concerns about structural damage to the concrete slab below the pool deck and "cracking and spalling" located in the parking garage.

The report from October 2018 was included in a series of public records that were published overnight on the Surfside, Florida, town website.

"Abundant cracking and spalling of various degrees was observed in the concrete columns, beams and walls," read one part of the survey's findings. "Several sizeable spalls were noted in both the topside of the entrance drive ramp and underside of the pool/ entrance drive/ planter slabs, which included instances with exposed, deteriorating rebar. Though some of this damage is minor, most of the concrete deterioration needs to be repaired in a timely fashion."

The revelation of the 2018 report adds to a growing list of potential warning signs.

On Thursday, USA Today was the first to report on a study, published last year, that showed the collapsed condo -- unlike other buildings around it -- had been sinking at a rate of about 2 millimeters per year between 1993 and 1999. The research was focused on the effects of subsidence, the gradual giving way or collapse of land, on coastal flooding hazards. It did not follow up on the status of the condo, so it is unclear whether the structure continued to sink at the pace described in the study.

But Shimon Wdowinski, a co-author of the study and professor with Florida International University's Institute of Environment, warned that his research did not provide a smoking gun.

"Other buildings didn't move in that eastern part of the city," Wdowinski told CNN. "If it is a precursor, it's only unique to that building."

Asked directly if the sinking -- or subsidence -- could have been a contributing factor to the collapse, Wdowinski said additional information was needed before rendering judgment.

"If everything moves downward at the same level, then not so much," but "if one part of the building moves with respect to the other, that could cause some tension and cracks," he told CNN. "Maybe some subsidence can initiate the process."

In an interview on Friday, Kobi Karp, a member of the American Institute of Architects, said that if the "settlement" of the build was "not equal," residents would have recognized the symptoms.

It remains unclear whether any complaints of that nature had been lodged with the condo's management.