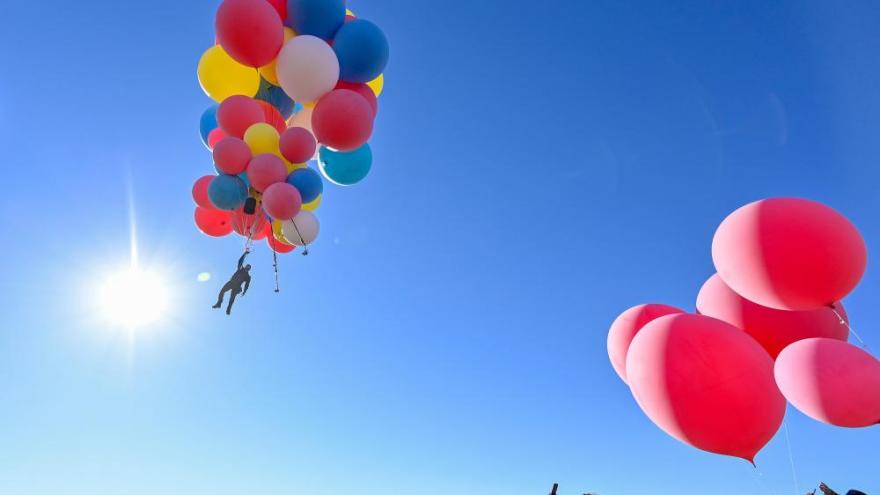 (CNN) -- During the last few months a man in the jetpack has been spotted flying over Los Angeles International Airport several times, but the unidentified man is not the only one to lift off in an unconventional way.

Oddly enough, there are at least four men who have used a type of balloon to soar above the ground, and all of them became famous in their own way.

A 33-year-old military veteran, Larry Walters, got the idea to float from Los Angeles to the Mojave Desert in a Sears and Roebuck lawn chair adorned with weather balloons -- 45, to be exact.

He took off on June 2 and became an instant legend.

He ended up drifting over LAX at 16,000 feet and was spotted by pilots flying into the airport.

According to a 2015 New York Times article, this is one of the reported conversations to air traffic control:

"This is TWA 231, level at sixteen thousand feet. We have a man in a chair attached to balloons in our ten o'clock position, range five miles."

Walters planned to descend by popping some of the balloons with an air gun, but it was lost shortly into his flight.

He ended up descending safely after hitting a few power lines.

Walters died in 2010, but he gave his chair to a child near where he landed, and it was donated to the Smithsonian in 2019.

Another aviation enthusiast was inspired to take flight after Walters proved successful.

"We wanted to do something fun and uplifting for the first day of 1984," Kevin Walsh told CNN.

So the 24-year-old, adorned with a parachute and 57 balloons, took to the sky from Minuteman Airport, west of Boston, Massachusetts.

He was attached by two thousand-pound ropes that he ended up having to cut with a razor blade because he left his knives on the ground.

His team took several safety precautions before the flight, including letting planes and other aircraft know that there would be parachute activity in the area.

The team also attached foil to the balloons so that Walsh would show up on radar. Walsh said he ended up being a big as the Statue of Liberty on the radar screens.

Walsh was fined $4,000 by the Federal Aviation Administration for flying too close to Boston's Logan Airport airspace.

"It was the adventure of a lifetime," he said.

In 2015, Daniel Boria was trying to get attention for his cleaning business when he tied more than 100 helium balloons to a lawn chair and soared through the sky over Calgary, Canada.

Equipped with an oxygen tank and a parachute, he spent about $10,000 to pull off the stunt.

Soon after he took flight, he opened a parachute and returned to the ground, where Calgary police arrested him and charged him with one count of mischief causing danger to life.

"I'd estimate I was going up about 500 to 1,000 feet in a minute," he told CNN at the time. "I was looking down on the city and watching 747s and planes approaching the local airport."

In September, David Blaine decided to try his hand at unconventional flight.

The famous illusionist floated over the Arizona desert by holding onto about 50 helium balloons.

"Every single stunt that I've ever done is about endurance and pushing past what I thought would be possible," Blaine said in a video before the performance. "I can't imagine that many people would dream of doing it."

The performance took about an hour from lift off to landing, and the event was live streamed on YouTube.

Though his initial goal was to reach an altitude of about 18,000 feet, he ended up floating to 24,900 feet -- or about 4.7 miles -- before skydiving and parachuting back to the ground.