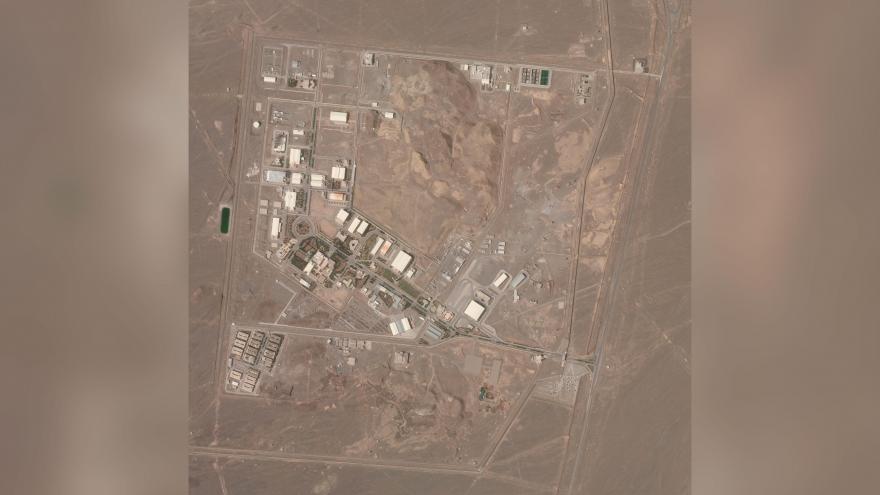 (CNN) -- Iran's Foreign Minister Javad Zarif has vowed revenge against Israel after an apparent attack on an Iranian nuclear site caused a blackout at the facility over the weekend.

The incident threatens to undermine recently revived diplomatic efforts between Washington and Tehran to revive the 2015 nuclear deal.

Newly inaugurated centrifuges at Iran's Natanz facility, a centerpiece of the country's contentious nuclear program, appeared to have been badly damaged in Sunday's incident, which Tehran has described as an act of "nuclear terrorism."

Israel's army chief hinted at possible Israeli involvement in the attack in comments on Sunday. Several Israeli media outlets, quoting unnamed intelligence sources, said Mossad, the national intelligence agency, was behind the operation but offered no other details.

The most high-profile condemnation from Tehran came on Monday, according to Iran's state-run IRNA news agency, when Zarif reportedly accused Israel of seeking "revenge" over Iran's efforts to lift US sanctions on the country during last week's indirect negotiations to return to the nuclear deal.

"Our stance will be stronger, and our sides in the negotiations must know that our enriching installations were so far the first generation," Zarif said, according to IRNA. "But from now on, we will fill Natanz with further advanced centrifuges with many more folds of power of enrichment."

The details of the incident at Natanz are murky. Iranian officials said Sunday that there was an act of "sabotage" that led to a blackout at the underground facility in the desert of Isfahan. They also said this happened hours after Iran ceremoniously launched advanced centrifuges at the Natanz plant on Sunday.

The extent of the damage is unclear but Zarif's promise to replace the centrifuges indicates that material losses may have been extensive.

Iran denies there were casualties, but the spokesman for the Atomic Energy Organization of Iran, Behrouz Kamalvandi, was badly injured at the facility, according to state media, falling from a height of seven meters on the same day.

Officials have not linked Kamalvandi's reported injuries to the incident. But on Monday, a video was released on social media showing him on a hospital bed vowing "to resist."

"Our nuclear industry is a time-honored and resilient industry. Our battle will be continued. We will resist," said Kamalvandi in a video address.

This is not the first security issue at Natanz. The facility lost a building when a fire broke out last July, in an incident officials described as an attack on its nuclear program. In 2010, the facility was also the target of the Stuxnet cyberattack, which security experts believe was carried out by Israel and the US.

What was going on at the plant at the time?

On Saturday, Iranian President Hassan Rouhani announced new advanced uranium enrichment centrifuges at Natanz, maintaining Iran's official line that its nuclear activities were for "peaceful and civil purposes" but touting the country's nuclear ability as stronger than ever before.

The inauguration of the centrifuges came on the 15th anniversary of the Iran's National Nuclear Technology Day. The unveiling was yet show of defiance by Tehran as it begins new talks over the 2015 Joint Comprehensive Plan of Action, which lifted US sanctions on Iran in exchange for curbs on its uranium enrichment program.

In 2018, then-US President Donald Trump withdrew from the deal, unleashing waves of crippling sanctions on Iran. A year later, Tehran began to gradually withdraw from its commitments to the nuclear deal, resuming parts of its uranium enrichment program.

But US President Joe Biden has vowed to return to the JCPOA. For months, Tehran and Washington have been at loggerheads about who should return to the landmark deal first -- Iran says it won't curb enrichment before the US lifts all sanctions, and the US has accused Iran of intransigence.

However, the last week showed signs of the stalemate thawing. Indirect talks between Washington and Tehran in Vienna, where other parties to the JCPOA shuttled between the two sides, appeared fruitful. Both sides have called the dialogue "productive."

What is Israel saying?

In keeping with usual practice, Israel has given no official comment on the Natanz incident. But on Sunday, Prime Minister Benjamin Netanyahu appeared to issue a veiled threat to Iran at a toast to mark the anniversary of the founding of the state of Israel.

In comments interpreted as a hint at Israel's possible involvement in the Natanz incident, Kohavi said on Sunday the country's "operations throughout the Middle East are not hidden from the eyes of the enemies."

In November, Iran's top nuclear scientist, Mohsen Fakhrizadeh, was assassinated in an attack that rattled the country. A senior US administration official said Israel was behind the killing.

Israel's leadership has vocally opposed the US's return to the JCPOA, arguing that it emboldens Tehran and compromises Israel's security.

On Monday, Netanyahu meets with US Defense Secretary Lloyd Austin who is on a visit to Israel. It is the highest-level visit to Israel by a member of the Biden administration.

What does it mean for nuclear talks?

The apparent attack could complicate the course of nuclear talks, but it is unclear to what extent, and officials have indicated that the talks will carry on. Zarif hinted that Israel was lashing out at the "success" of the talks according to the IRNA and Austin on Monday said that the dialogue will continue.

Austin did not comment directly on the Natanz incident when asked about it by journalists Monday saying only, "I'm aware of the report, I really don't have anything to add on Natanz," he said. "In terms of our efforts to engage Iran in diplomacy and the JCPOA, those efforts will continue and I'm obviously supportive of the President's efforts to negotiate a way ahead there. And I'll just leave it at that."

However, while the scale of the damage at Natanz is still not publicly known, the facility's apparently reduced capabilities could weaken Iran's hand in negotiations.

Ramped up uranium enrichment and the potential enhancement of centrifuges served to increase pressure on the US to expedite and expand the scope of sanctions relief. With reduced leverage, the course of the talks could shift.