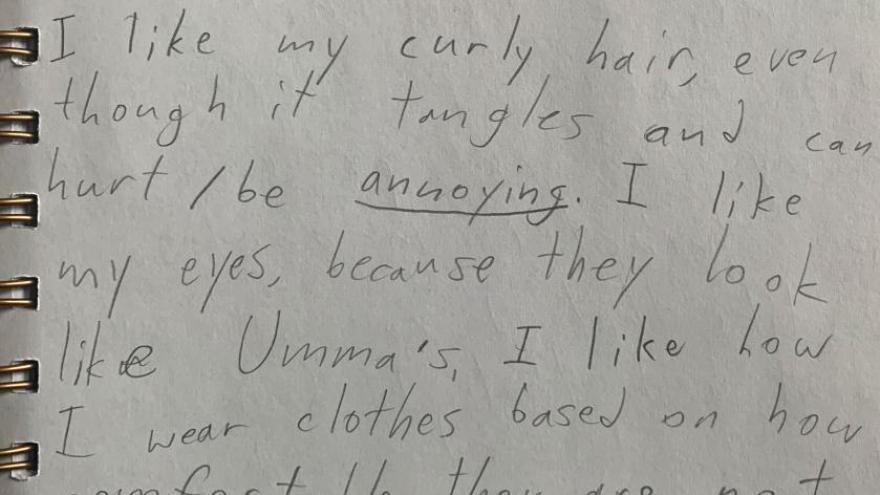 Days after the murders of the six Asian women in the Atlanta spas, Kyung Lah was stunned to read a single line in her daughter's letter.

(CNN) -- Sometimes it takes the youngest among us to show us where we currently reside as a society.

I was reminded of this when my daughter, age 11, a product of her Korean American mother and a White rural Southern father, wrote a letter to herself.

Like most parents, my husband and I have struggled with how to keep our young kids busy during the pandemic without tearing our hair out. One of the weekend tasks for our children is to write letters to three of their friends and send them via snail mail. This past weekend, my husband added on the task of writing a letter to themselves, under the theme of "what I like about myself."

Days after the murders of the six Asian women in the Atlanta spas, I was stunned to read a single line in my daughter's letter: "I like my eyes, because they look like Umma's." Umma means "mom" or "mommy" in Korean. I was so surprised by the line that I tweeted the portion of her letter:

My daughter, a biracial child, is unafraid and proud to look Asian, feelings that I can admit are not what I have felt throughout my life.

I immigrated to the US with my parents when I was four years old, raised in a household that was Korean on the inside and struggled to understand America on the outside. I watched the assumptions of non-Korean customers walk up to their convenience store counter, mocking how my parents spoke English to their faces. Both of my parents with their master's degrees had little value to their customers, who viewed them as simply, stupid.

My father, who would go bankrupt trying to offer the life of advanced education and a middle-class future to his children, believed the fastest way to success in America with a foreign face was to raise his kids speaking "White people English." We stopped speaking Korean at home, forever stunting my Korean language at an elementary-grade level.

My parents encouraged me to watch the evening news in Chicago where we lived. They'd point out the sole Asian face they could find on TV, a Chicago anchor named Linda Yu. She spoke English just like the White and Black people on TV, the only living example of what we could be.

My parents succeeded in both my brother and I speaking crisp, accent-less English. My brother is a lawyer, and I'm a journalist, working in a profession where my adopted language is protected under the 1st Amendment of the US Constitution.

Our success was always their success, they told us. The price for that success, they believed, was swallowing all the fear and humiliation along the way.

Some of my earliest memories of my mother are of her under the cheap neon lights of my parents' little corner store, waving her hands in the air as if conducting an orchestra of one -- me.

"They don't like how we look," she often warned me.

My parents believed hiding what they are, speaking their native language softly so no one heard, was the ticket to acceptance in America. On many levels during that era of the 1980's in Chicago, they were right. It was only as they watched the 1992 Los Angeles riots unfold on their TV screens s that they began to understand how the established power structure would allow Black and Brown communities to burn in pain alone. They started to understand that speaking softly meant they choose when to listen.

In Atlanta and across this country, I'm hearing Asian Americans begin to speak up more loudly, demanding to be seen and heard. It is not easy, and it's certainly not easy for me. But my daughter reminds me that we need to be seen and seen as what we are -- and be proud of it.