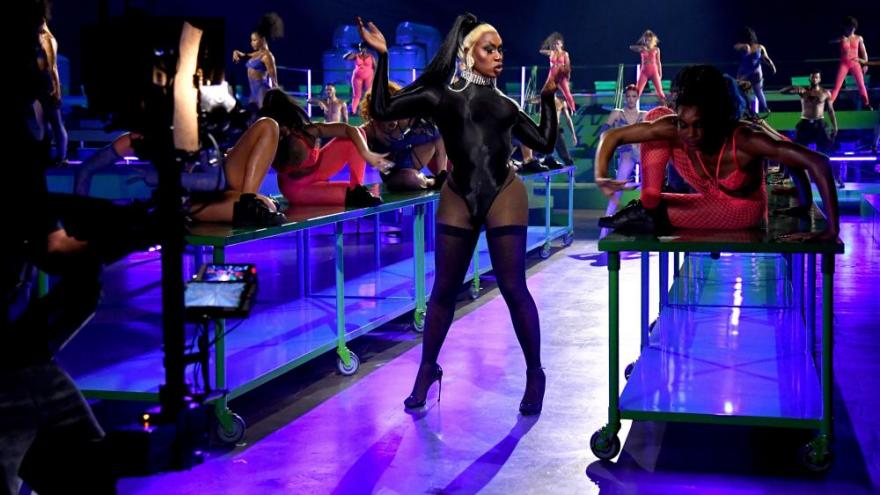 (CNN) -- Rihanna ignited backlash this week after Muslim fans called her out for using a song that included sacred Islamic verses during her second Savage x Fenty lingerie fashion show.

Lingerie models danced to the song "Doom" by London-based producer Coucou Chloe during a portion of Rihanna's show, which streamed on Amazon Prime on Friday. The song, released in 2017, includes a remix of a hadith narration about the end of times and judgment day.

The hadith, a written record of the sayings and actions of the Prophet Mohammed and his closest companions, is considered extremely sacred to Muslims, and come secondary only to the Quran in terms of textual authority.

The song was listed on the Savage x Fenty Volume 2 playlist on Amazon, where the fashion show streamed.

In a statement to CNN, Savage X Fenty said, "We truly apologize for the song that appeared in the Savage x Fenty show. We shouldn't have used it. The song's vocal tracks are being replaced and the show is being edited."

It added, "We have nothing but the utmost respect and love for the Muslim community. All Fenty brands have been founded on the notion of inclusivity and respect to all, and this was an unfortunate mistake on our part. We will be vigilant going forward to ensure this is never repeated."

A spokesperson for Coucou Chloe referred CNN to the artist's apology statement on Twitter.

"I want to deeply apologize for the offence caused by the vocal samples used in my song 'DOOM'," Coucou Chloe said in the tweet. "The song was created using samples from Baile Funk tracks I found online. At the time, I was not aware that these samples used text from an Islamic Hadith."

The singer added that she takes responsibility for not doing research on what the words meant and is working on getting the song removed from all streaming platforms.

The song was met with what clothing designer Farrukh Ershad described as "the collective outrage of Muslims."

"For us Muslims, Ahadeeth are a sacred scripture and fundamental part of our religion," Ershad, who is CEO of 5ive Pillars, a fashion brand inspired by Eastern and Islamic culture, told CNN. "To see a Hadith used in this type of context both by the artist, and by Rihanna's Fenty team was distasteful and disrespectful."

Others outside the fashion industry, including those who describe themselves as longtime Rihanna fans, also took offense.

"Personally, I felt very disrespected, especially since the show was supposed to be revolutionarily inclusive," Myesha Choudhury, 19, told CNN. "While I do extremely appreciate how the show showcased all types of races, ethnicities, and body types, I was disappointed that such an inclusive show would alienate its Muslim audience."

"I honestly was not surprised. Muslims are so accustomed to being disrespected in the media, that the community has become numb to it," she added. "Muslims have been disrespected and mocked in the mainstream media for the longest time, from awful portrayals in TV shows to disrespecting to excluding modest fashion, and I am glad that artists are now being held accountable and learning from their mistakes."

Choudhury was not alone. Fans responded in droves to Riihanna's post announcing the release of her second lingerie fashion show, asking her to apologize for using the song in her show.

"Rihanna, I used to cheer you up for everything you did, but today you disrespected my religion, I'm so hurt, you have been to far, you and the girl who made the music have to apologize for what you did, that's the minimum you can do," tweeted one fan.

While using the song may have been unintentional, some on Twitter said that the singer still needs to issue an apology.

"It's okay to do a mistake, but it's not okay to not apologize for it, you used a religious verse in your show and it's disrespectful for Islam and Muslims. Please remove it," responded another Twitter user.

Ershad, the designer, applauded Coucou Chloe for apologizing. He said he hopes the incident will be used to educate others.

"I hope a negative moment like this can be used positively, to educate everyone involved about the sanctity of religious scriptures and texts within the Muslim world," he said, "with the hope that something like this doesn't happen again."