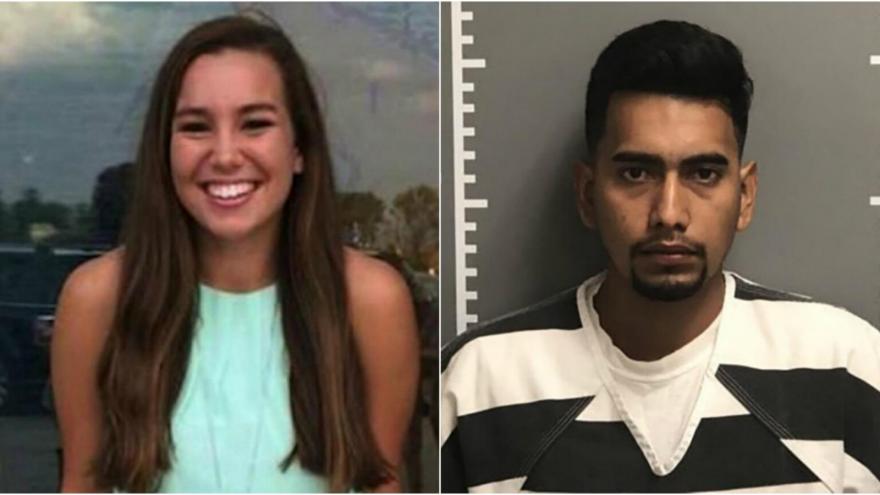 Cristhian Bahena Rivera (right) is charged with the murder of Mollie Tibbetts (left).

(CNN) -- Nearly three years after the body of 20-year-old Mollie Tibbetts was found in a cornfield, prosecutors delivered opening statements in an Iowa courtroom Wednesday accusing a farmworker of following her on a run, fatally stabbing her, putting her in his vehicle's trunk and then hiding her body.

"When you put this evidence together, there can be no other conclusion than that the defendant killed Mollie Tibbetts," Poweshiek County Attorney Bart Klaver said.

Tibbetts, a University of Iowa student, went missing after an evening run in Brooklyn, Iowa, on July 18, 2018, sparking an extensive search in the region that drew national attention. A month later, her body was found under corn stalks after a man allegedly confessed to hiding her body and led investigators to the scene.

Cristhian Bahena Rivera, a 26-year-old Mexican man who officials said came to the US illegally and worked at an Iowa dairy farm, has pleaded not guilty to first-degree murder. In court, Rivera is wearing a large pair of headphones, as two interpreters are translating the proceedings, Judge Joel Yates said.

In opening statements, the prosecution's case against Rivera relied on his unique vehicle accessories and his admissions to investigators, much of which was previously included in an arrest affidavit. Rivera's defense attorney deferred their opening statements to later in the trial.

Prior to her death, Tibbetts was studying psychology at the University of Iowa and wanted to get a doctorate and write books, her father said.

Rivera had worked for four years at Yarrabee Farms, a nearby dairy farm. In applying for the job, he provided false forms of ID that were verified through the Social Security Administration's verification system, Yarrabee Farms co-owner and manager said in 2018.

Tibbetts' death and Rivera's undocumented status pushed the tragic story into the rancorous partisan political debate around immigration. Former President Donald Trump brought up her story at rallies as part of his push to "build a wall" and vilify undocumented immigrants as rapists and killers.

But there is scant data to support that point, and the existing evidence shows undocumented status does not correlate with criminality. A 2020 study published in Proceedings of the National Academy of Sciences of the United States of America, which examined comprehensive arrest data from the Texas Department of Public Safety between 2012-2018, found undocumented immigrants have substantially lower crime rates than US-born citizens and legal immigrants across a range of felony offenses.

Similar research from the Cato Institute, a libertarian think tank, also found the criminal conviction rate was higher for native-born Americans than for immigrants in the US legally or illegally.

Rob Tibbetts, Mollie's father, has repeatedly called on politicians to stop using her death to make points against immigration, saying she believed these views were "profoundly racist."

"Sadly, others have ignored our request. They have instead chosen to callously distort and corrupt Mollie's tragic death to advance a cause she vehemently opposed," he wrote in an op-ed in the Des Moines Register. "I encourage the debate on immigration; there is great merit in its reasonable outcome. But do not appropriate Mollie's soul in advancing views she believed were profoundly racist."

The trial had been delayed multiple times and was moved to Davenport due to pretrial publicity, court records show. It's expected to last about 10 days.

Klaver, the prosecutor, urged jurors in his opening statements to focus on three aspects: Rivera's vehicle, Tibbetts' blood in the trunk and his admissions to investigators.

Home surveillance video from the night of July 18, 2018, spotted the silhouette of a woman running -- as well as repeated sightings of a black Chevy Malibu with non-standard rims, chrome door handles and chrome mirrors, Klaver said. An investigator later spotted a similar vehicle and interviewed the driver, identified as Rivera, Klaver said.

In a follow-up interview with a Spanish-speaking Iowa City Police officer on August 20, Rivera admitted he was the only one who drove that vehicle, the prosecutor said. After initially denying knowing about Tibbetts, he then admitted he had seen her the night she disappeared, admitted he found her attractive and said he circled back for a second look, Klaver told the jury.

The next morning, Rivera and investigators went to a cornfield in rural Poweshiek County, where he allegedly admitted he had followed Tibbetts and jogged next to her. She had threatened to call the police, and Rivera admitted he got angry and fought with her, Klaver told the court.

Her body was consequently found in that cornfield wearing the same multicolored running shoes from her jog, the prosecutor said. The Medical Examiner determined Tibbetts had been stabbed seven to 12 times. Blood matching her DNA was also found in the trunk of the vehicle, Klaver said.

Boyfriend testifies he was away on work trip

The prosecution's first two witnesses in the trial were Tibbetts's boyfriend, Dalton Jack, and his brother, Blake Jack.

Blake Jack, who testified first, said that he, his fiancée and Dalton Jack were all out of town the week Tibbetts went missing. While the brothers were off on a work trip for Blake's construction company, Tibbetts had been staying at their house to take care of their dogs, he testified.

Blake Jack said he first learned she was missing from his brother, who said he learned that she hadn't shown up for work. Jack testified that they returned home to check on Tibbetts at his house and she wasn't there, and he said he worked with friends and neighbors to try to find her.

Dalton Jack, her boyfriend, also testified that he had been in Dubuque for work with his brother from July 16 until July 19. His last communication with her was a Snapchat that he opened the night of July 18. After learning she was missing, he returned home to look for her and spoke with police investigators several times.

He said she would run between 1 and 6 miles almost every night and described her as the love of his life.

"She was always happy, bubbly, goofy. Always liked to have fun," he said.

In a tense cross-examination, he said he had previously cheated on Tibbetts, they had been having relationship troubles and he had initially withheld that information from police.

"I didn't think it was pertinent to the case," he said.