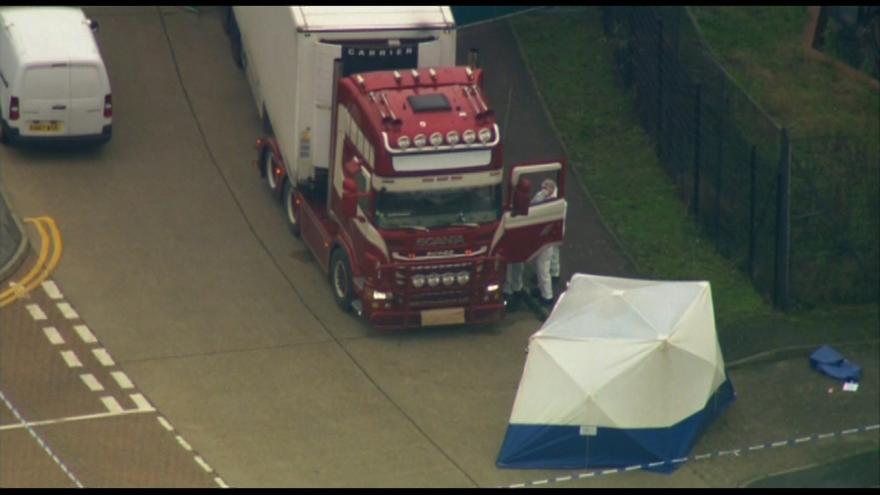 (CNN) -- British police have launched a murder investigation after 39 people, including a teenager, were found dead in a truck at an industrial park 30 kilometers east of London on Wednesday.

Police said the container arrived by sea in Purfleet, Essex, early Wednesday morning from the Belgian port city of Zeebrugge. Just over an hour later, at around 1.40 a.m., ambulance workers called police to the truck, which was by then parked in an industrial estate in the nearby town of Grays.

A 25-year-old truck driver from Northern Ireland was arrested on suspicion of murder, police said. 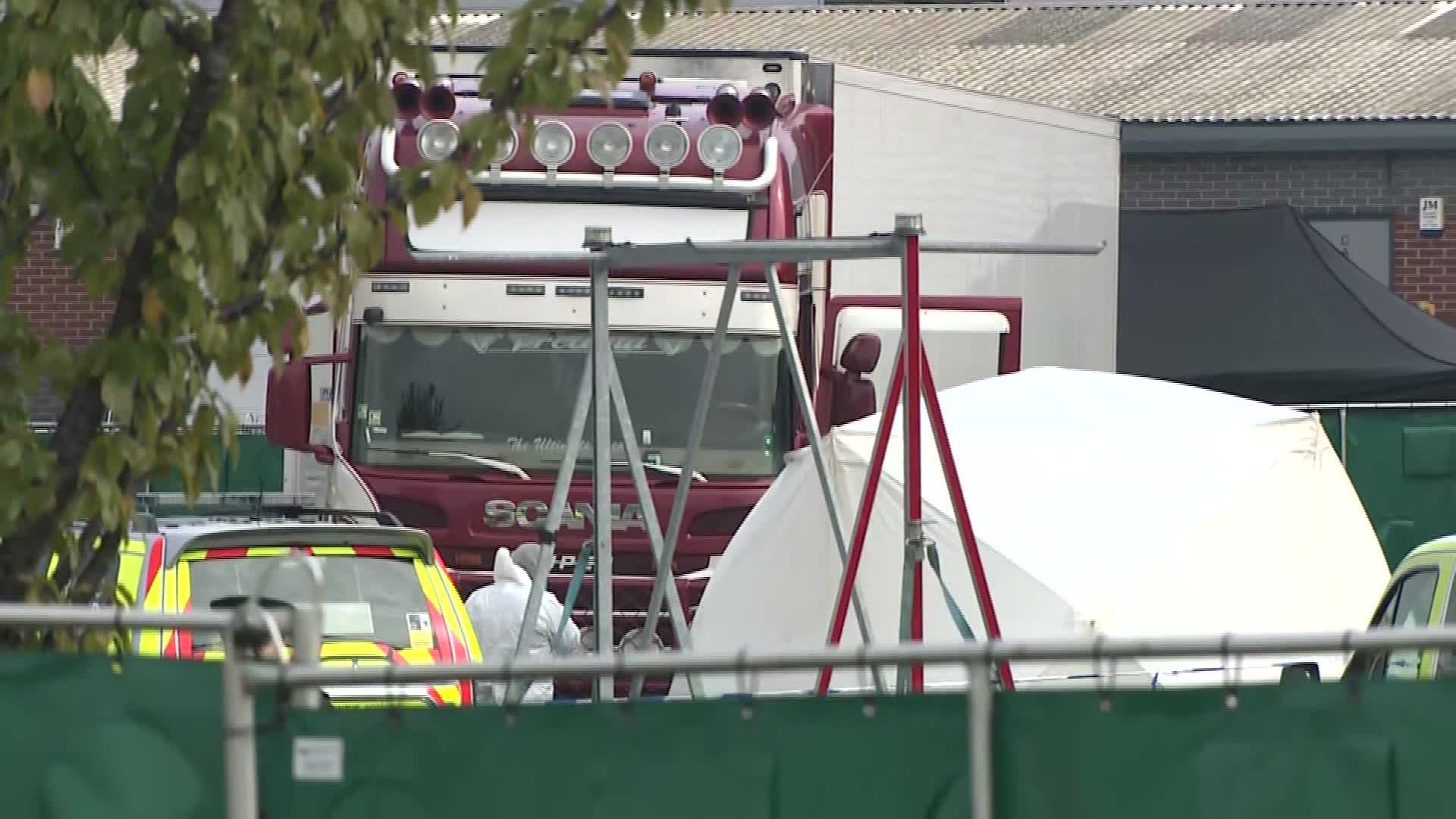 Police had earlier said that the Bulgaria-registered vehicle entered the UK through the Welsh port of Holyhead over the weekend. A regular ferry service connects Holyhead with the Irish capital, Dublin. Police later said the truck, and not the container, had originated in Northern Ireland.

"We have arrested the lorry driver in connection with the incident who remains in police custody as our enquiries continue," Chief Superintendent Andrew Mariner said in a statement.

As the tragedy unfolded, UK Prime Minister Boris Johnson called for the crime's perpetrators and "all such traders in human beings" to be "hunted down and brought to justice."

Deputy Chief Constable Pippa Mills told reporters that it was the police's "number one priority" to find out who the people who died were, and where they were from. The force has set up a helpline for people to call if they are concerned their relatives might have been among those inside the truck.

Aerial footage of the scene, filmed by Reuters, showed a police cordon and black tent set up at the back of the white container, which was attached to a red Scania truck.

CNN saw the truck being moved later on Wednesday. Police said it would be moved to a "secure location" at Tilbury docks, about a 20-minute drive away from Grays, to "maintain the dignity of those who have lost their lives."

News of the grisly discovery shocked British lawmakers; many Members of Parliament speculated in the House of Commons on Wednesday that the incident was linked to human trafficking. Police have not confirmed that claim.

Jackie Doyle-Price, who is the Conservative MP for Thurrock, where the bodies were found, wrote on Twitter: "Sickening news of 39 people found dead in a container in Grays. People trafficking is a vile and dangerous business. This is a big investigation for Essex Police. Let's hope they bring these murderers to justice." 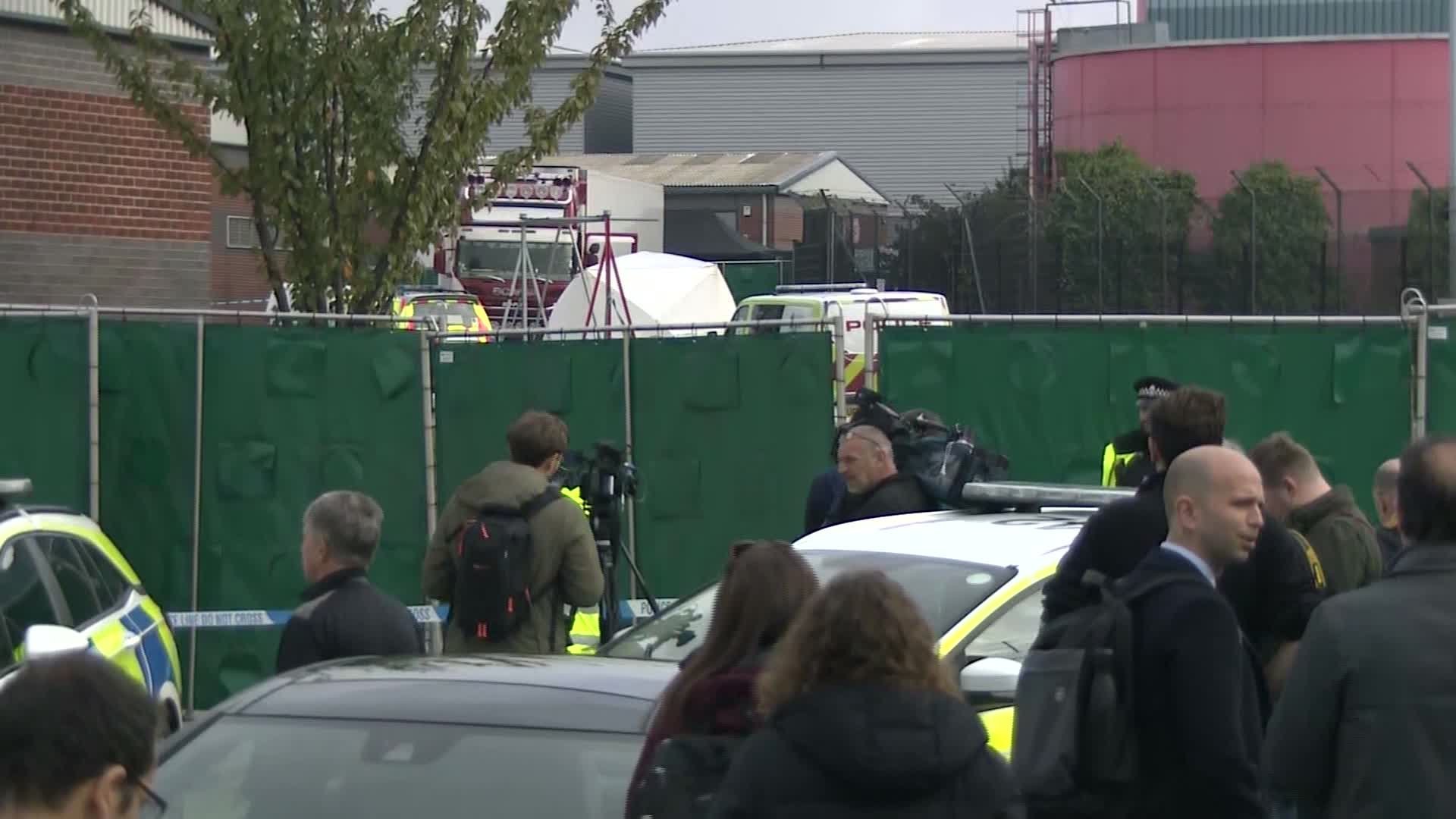 Richard Burnett, chief executive of trade body the Road Haulage Association, told reporters the container appeared to be refrigerated. That could mean freezing temperatures of anywhere between -5 to -10 degrees Fahrenheit, he told PA Media, making conditions "absolutely horrendous" for anyone stuck inside.

Irish, Northern Irish and Bulgarian authorities have also been alerted to the discovery as English forces scrambled to figure out the truck and container's route to the UK.

Bulgaria's Ministry of Foreign Affairs said the Scania truck was registered in the Bulgarian coastal city of Varna by an Irish citizen. In a statement, it added that the police think it's "highly unlikely" the victims were Bulgarian citizens.

The Police Service of Northern Ireland confirmed on Twitter that it was working with its Essex counterparts.

Ireland's Prime Minister Leo Varadkar told the country's Parliament on Wednesday that investigations would be carried out "if it's established the truck passed through Ireland."

Ireland's police force, An Garda Síochána, said it was monitoring the UK investigation, "and will provide every assistance possible."

Police placed a cordon around the industrial park in Grays and said they were working with the local council "to mitigate against any impact our investigation scene will have locally."

The industrial estate is comprised of logistics and courier companies, some of which were inaccessible because of the cordon.

A local resident who lives a street away from the industrial estate told CNN he was heartbroken for the victims.

"It's so sad. My heart is broken for them," Shafi Said, a 35-year-old taxi driver, said. "They're all innocent people -- and there was a child on board. I've got an 11-year-old son, I was so shocked -- if you put yourself in their position, yeah it's very shocking."

"Obviously, it's terrible news," Dan Peters, a managing director of Pirtek, a hydraulic maintenance company based on the street the truck was found, told PA news agency. "We're not able to gain access to our units to open up for daily business."

The UK Home Secretary, Priti Patel, said she was "shocked and saddened" by what she called the "utterly tragic incident," according to her Twitter account.

Interior Minister Brandon Lewis also called the news "tragic" in a tweet. "Thoughts are with victims, their families & friends. Police are working to ensure those responsible are brought to justice," he wrote.

In recent years there have been a number of fatal incidents in the UK and Europe involving large numbers of migrants who were found suffocated to death in trucks or containers. 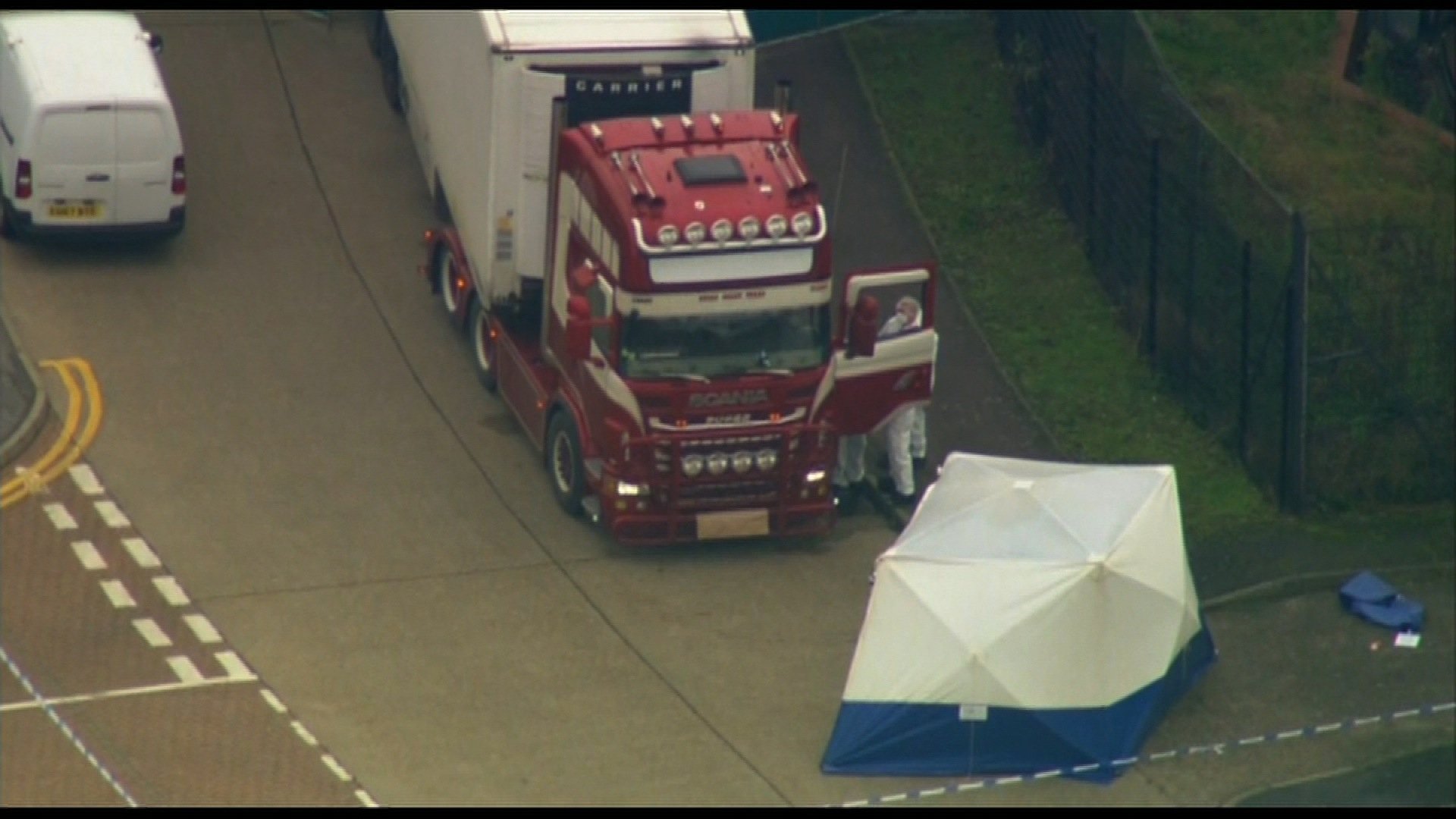 Four human traffickers were given life sentences this summer over the deaths of 71 migrants whose bodies were found in an abandoned truck in Austria in 2015, Reuters reported.

The past year has seen an increase in the number of migrants attempting to cross the English Channel by boat. Experts have partially linked that rise to the UK enforcing more stringent border checks -- which in turn has made the option of truck crossings a more difficult and costly affair, as smugglers raise their fees.

"The UK has invested a lot of money in protecting the lorry routes" from migrants crossing from France, Nando Sigona, an associate professor in international migration at the University of Birmingham, told CNN earlier this year. "That route has probably been sealed off, or made more difficult to pursue."