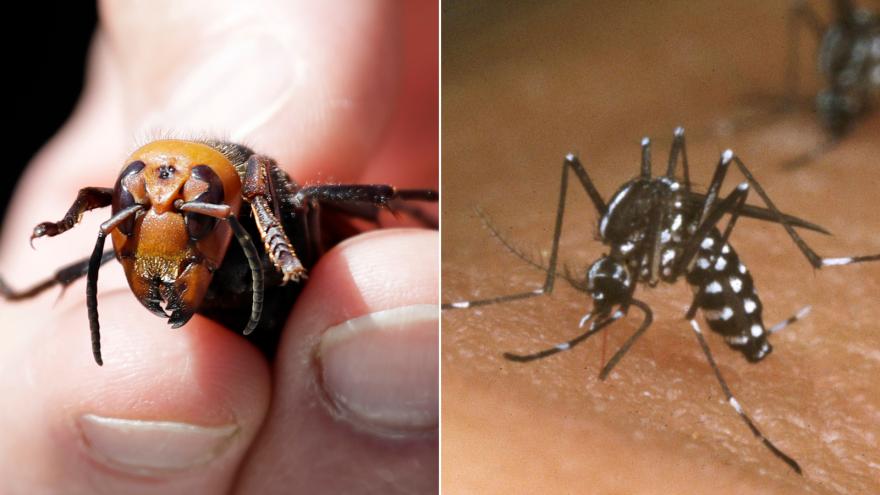 (CNN) -- A "murder hornet" has apparently invaded the US. It's not the insect bogeyman you should fear, though.

It's called the Asian giant hornet, for starters, and only two have been spotted in the US, both in Washington state. It can harm honey bees, but the bees are far more susceptible to other viruses, mites and a dwindling habitat. And while its stings are capable of killing people, that's relatively rare.

The insect you should be mindful of is probably buzzing nearby, and it's got a taste for blood -- yours.

"If there are any animals most deserving of fear, it's the mosquitoes," said Lawrence Reeves, assistant research scientist at the University of Florida's Florida Medical Entomology Laboratory.

Mosquitoes are one of the most dangerous animals in the world to humans because of the diseases they transmit, said Reeves, an entomologist whose research focuses on mosquitoes and the pathogens they transmit.

The Asian giant hornet is thought to kill 50 people a year worldwide, mostly due to allergic reactions or multiple stings.
More than 700,000 people die from mosquito-borne illnesses every year, according to the World Health Organization.

While those diseases are fairly rare in the US, the risk isn't zero.

"In the US, I would expect that becoming infected with a mosquito-transmitted virus is about as common as winning the lottery," Reeves said. "That said, there are always lottery winners."

In the US, common mosquito-transmitted diseases include West Nile virus and dog heartworm.

But 2019 saw a significant outbreak of eastern equine encephalitis, or EEE. That mosquito-borne illness infected at least 38 people in the northeast and Midwest and killed 15 of them, according to the Centers for Disease Control and Prevention.

EEE is quite serious: One in three people infected with it die, and those who survive often face neurological damage.

Like wasps and bees, the Asian giant hornet probably doesn't sting people unless it feels threatened. If you left it alone, it likely wouldn't bother you, Reeves said -- antagonize them at your own peril.

Mosquitoes, though, bite because they're hungry. Female mosquitoes rely on blood to load up on the protein they need to make their eggs (ah yes, baby mosquitoes -- the last thing we need!).

There are 3,000 species of mosquitoes and counting

Reeves said he's surprised the Asian giant hornets have drummed up as much attention as they have. Entomologists identify new species of invasive mosquitoes every year, sometimes multiple times a year, in Florida.

There are more than 3,000 species of mosquitoes worldwide, and different species carry different viruses.

Your risk of contracting a mosquito-borne illness is tied to where you live, Reeves said: If you live in the tropical and humid Florida Keys, the southernmost point of the US, then your risk is far higher than someone who lives in urban Manhattan.

But mosquitoes can live almost anywhere in the US, as long as there's standing water and some warmth. The Asian giant hornet, again, has only been spotted in Washington state. It's most prevalent in tropical parts of east Asia.

There are other species in the US scarier than 'murder hornets'

Mosquitoes aren't the only ones. There are other foes more formidable and painful than Asian giant hornets.

Take the tarantula hawk wasp. Even larger than the two-inch giant hornet, this wasp's sting ranks second on the Schmidt Pain Scale, a system devised by entomologist Justin Schmidt. He described the pain as "blinding, fierce, shockingly electric. A running hair dryer has just been dropped into your bubble bath."

They live across much of the southern and western US, Reeves said, and most people don't even know they exist, perhaps because they lack the word "murder" in the name.

Stave off stings from either species

Contracting a mosquito-borne illness is a lottery no one wants to win.

To stave them off, learn about the mosquitoes that populate your area.

Cover up when you're outside or wear insect repellent that contains the powerful ingredient DEET and make sure your pets are up-to-date on their vaccines -- mosquitoes could prick them, too.

And think twice before you kill a colony of native wasps, Reeves said. Many species get rid of invasive pests and pollinate plants, and getting rid of them may disrupt the ecological balance.

If you do, by some slim chance, encounter an Asian giant hornet, leave it alone and alert your state department of wildlife. They can handle it from there.