Some Trump administration officials resign while others stay to prevent chaos 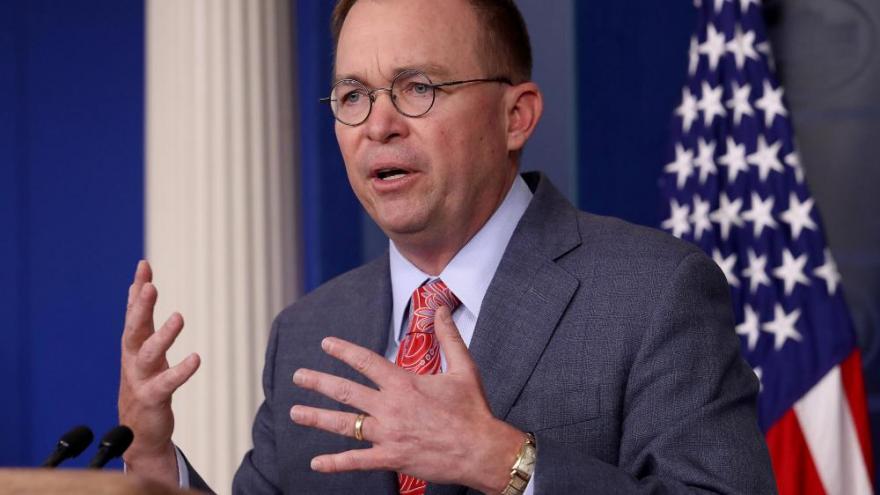 Mick Mulvaney joins others in resigning from his post as special envoy to Northern Ireland. Pictured here during a briefing at the White House on October 17, 2019, in Washington, DC, Mulvaney was then acting White House chief of staff.

(CNN) -- President Donald Trump's top national security officials received calls in the hours following a mob attack on the US Capitol urging them not to resign, according to people familiar with the matter, an effort meant to safeguard American security as aides describe Trump devolving into volatile instability.

The fear of resignations came as senior officials began quitting in the hours after the assault, disgusted by Trump's inciting the rioters and refusal afterward to condemn them. Talk of invoking the 25th Amendment that could remove Trump from office escalated. And Democrats called for another impeachment.

The list of aides and senior administration officials submitting resignations was growing Thursday, though at least one official who had been considering quitting decided to hold off. Aides said Trump's dark-of-night statement promising an "orderly transition" was released in part to stave off a mass exodus of aides and to tamp down speculation about removing the President from office.

Secretary of State Mike Pompeo, Director of National Intelligence John Ratcliffe and national security adviser Robert O'Brien all received multiple phone calls from concerned former senior national security officials and the leaders of major corporate national security firms asking if they plan to stay on, according to a person familiar with the conversations who had spoken with all three of them.

Pompeo, Ratcliffe and O'Brien all got a similar message: it was important they stay on for the continuity of government in the national security realm.

These former officials and corporate figures conveyed they did not want a political crisis turned into a national security one, the person told CNN, and were concerned foreign adversaries may try to capitalize on it.

The calls come as several senior figures were weighing resignations or have already stepped down, including Trump's deputy national security adviser, Matt Pottinger, who resigned Wednesday.

As of Thursday, it appeared Pompeo, Ratcliffe and O'Brien will not leave their roles. CNN reported Wednesday that O'Brien was considering quitting. Like many others in the administration, they were dismayed by the scenes that unfolded on Capitol Hill, this person said.

One senior aide described fellow officials serving in national security posts as remaining in their positions out of concern for the country's safety.

"I'm disgusted and shaken," the senior administration official said of Wednesday's events. But the official said at this point, they've decided not to resign out of concern for the "radical, unqualified loyalists" the President and his personnel chief Johnny McEntee have installed recently and could continue to install in the final two weeks.

"At this point, I can't let that happen where I sit," the official said.

Others, however, decided to leave.

Transportation Secretary Elaine Chao announced in a statement Thursday that she will resign effective Monday, saying she was "deeply troubled" by the "entirely avoidable" events at the Capitol building.

Chao decided to resign after taking "time to absorb" the insurrection on Capitol Hill and the President's response to it, according to a senior administration official. The official said she weighed whether to exit the administration with staff and her husband, Senate Majority Leader Mitch McConnell, before making the decision.

Former White House chief of staff Mick Mulvaney, who still had an administration job as special envoy to Northern Ireland, told CNBC in an interview Thursday morning that he called Secretary of State Mike Pompeo on Wednesday night to resign.

"I can't do it. I can't stay," Mulvaney said in the interview.

On Wednesday in addition to Pottinger, the first lady's chief of staff Stephanie Grisham, a press aide and the White House social secretary all resigned.

On Thursday morning, a senior administration official confirmed that John Costello, the Commerce Department's deputy assistant secretary for intelligence and security, resigned from his post. Ryan Tully, senior director for European and Russian Affairs, also resigned from the National Security Council, a White House official confirmed. And Tyler Goodspeed, the acting chairman of the Counsel of Economic Advisers at the White House, submitted his resignation Wednesday, according to a person familiar with the matter.

"Those who choose to stay, and I have talked with some of them, are choosing to stay because they're worried the President might put someone worse in," Mulvaney said.

Trump encouraged the rioters in a speech immediately preceding the breach at the Capitol and has only reluctantly attempted to tamp down emotions.

He was initially reluctant to issue his statement vowing an "orderly transition" early Thursday morning after Congress affirmed the Electoral College win for President-elect Joe Biden. But Trump ultimately went through with it after pressure from multiple advisers, including White House counsel Pat Cipollone, according to two people familiar with the matter.

Some of the President's advisers encouraged him to go further than he did in the statement and pledge to stop fighting the election results. Some aides also wanted Trump to commit to prosecuting the protesters who breached the Capitol, as Vice President Mike Pence did in his own statements earlier in the day.

Ultimately, Trump agreed to a minimal statement vowing the orderly transfer of power but still vowing to fight.

"I have always said we would continue our fight to ensure that only legal votes were counted," he wrote via his social media adviser Dan Scavino.

The deliberations over the late-night statement occurred in the White House residence, where Trump bunkered down in what advisers described as an unstable emotional state. Among the advisers he consulted throughout the course of day were Scavino, chief of staff Mark Meadows and his daughter Ivanka, who helped convince him to tape a video amid the mob protest.