8 shot and 8 others injured in a mass shooting in Brooklyn subway, FDNY says 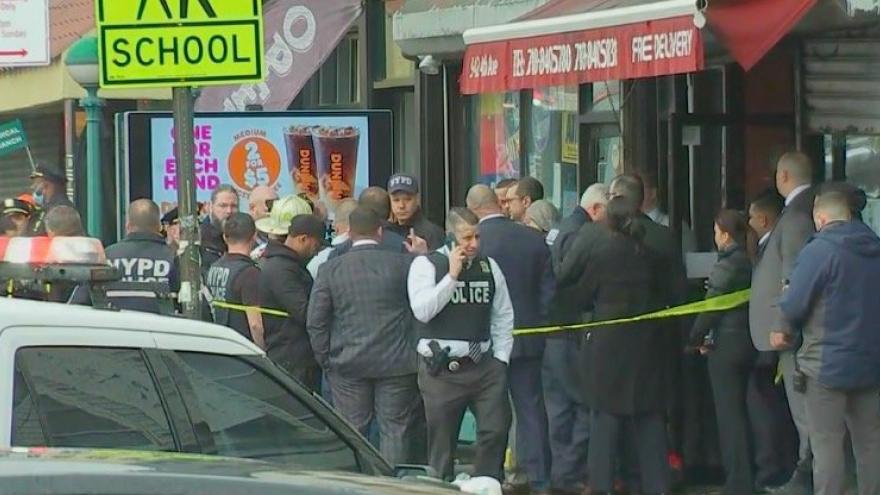 (CNN) -- Eight people were shot and eight others injured in a mass shooting in a Brooklyn subway during Tuesday morning rush hour, according to FDNY spokesperson Amanda Farinacci.

A preliminary investigation shows a possible smoke device was detonated, according to a senior law enforcement official. The NYPD said that there were no active explosive devices at this time.

The incident began at about 8:30 a.m. when the Fire Department of New York was called to the 36th Street subway station in Brooklyn's Sunset Park neighborhood for a report of smoke.

Yav Montano told CNN he was on the N express northbound subway train heading to work when a smoke grenade or smoke bomb went off and he heard what sounded like fireworks. The train was between stations at the time, so panicked passengers tried to move to another train car to get further away from the smoke, he said.

"The whole car was engulfed in smoke," he said. "I couldn't even use my mask anymore because it was black with smoke. It was ridiculous."

When the train arrived to the 36th Street station, the passengers fled off the train onto the platform in a rush.

Police told the public to avoid the area of 36th Street and 4th Avenue in Brooklyn, where a large presence of emergency responders gathered.

The mass shooting comes amid a rise in shootings in New York over the past two years and a particular rise in violence on the subway that has become a focus of Mayor Eric Adams' administration. There have been 617 crime complaints so far this year on the transit system, a 68% increase from this point last year, NYPD data shows.

The incident is the second mass shooting, defined as at least four people shot, in Brooklyn this year and the fourth in New York State, according to the Gun Violence Archive. The first Brooklyn mass shooting of the year was on January 13 at a Brooklyn event hall.

The Sunset Park neighborhood is located in the southwest corner of Brooklyn and is home to a Chinatown and Latin American areas. All schools in the nearby Brooklyn area are on a "shelter in," which a Department of Education spokesperson explained means no one is allowed to leave the building, and only students are allowed in.

Adams, who has Covid-19, has been briefed on the situation, his spokesperson Fabien Levy said.

"While we gather more information, we ask New Yorkers to stay away from this area for their safety and so that first responders can help those in need and investigate," Levy said on Twitter.

The Metropolitan Transportation Authority, which operates the subways, says they are also investigating the incident and that D, N and R trains are holding in both directions in Brooklyn.