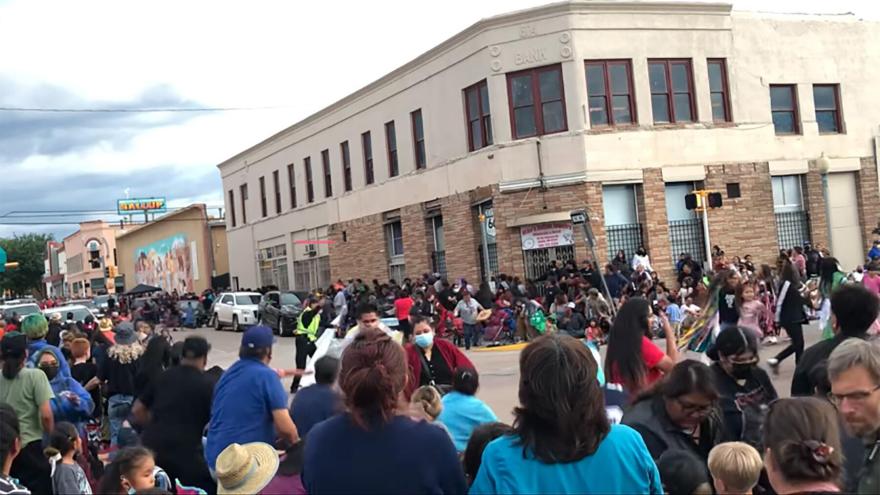 A screengrab from a witness video shows the moment crowd members realized a car was driving through a parade in the city of Gallup, New Mexico, on August 4.

(CNN) -- An SUV driver who on Thursday evening allegedly struck people along a parade route in Gallup, New Mexico, has been accused of aggravated DWI and other charges, according to the New Mexico State Police.

Gallup police were told several people in a Chevrolet Tahoe parked along the route of the Ceremonial Night Parade were drinking alcohol, according to state police. As officers approached the SUV, the driver took off and both officers were injured, state police said.

"The Tahoe continued eastbound on West Coal Avenue toward parade participants while officers attempted to move spectators out of the Tahoe's path," the release says.

A video taken by witness Sean Justice shows a group of people performing in the street when the crowd burst into screams, with people leaping up and rushing in the opposite direction of what appears to be a moving SUV.

A statement from Gallup city officials said the SUV hit pedestrians, vehicles and a business before it was stopped.

Another video captured by witness Keisha Joe shows what appears to be the SUV which was driven through the parade. In front of the SUV is a damaged car on the sidewalk, its front door crumpled in.

Authorities said there is no evidence of a hate crime.

The two male passengers in the SUV were taken to the Gallup Detox Center.

"We are deeply saddened by this incident. We encourage everyone to attend the remaining Gallup Inter-Tribal Ceremonial events," city officials said. "The city is working with multiple agencies to ensure safety is of the highest priority. We will begin healing together in this celebration of cultural connections."

The Gallup Intertribal Ceremony will continue as scheduled. Thursday was the first night of the 11-day-long event. Another parade is scheduled for August 13, according to the event website.

"We're incredibly saddened and shocked by the life-threatening and traumatic incident that took place last night when a vehicle drove through the Ceremonial Night Parade," Melissa Sanchez, the executive director of the New Mexico Tourism Department Intertribal Ceremonial Office, said in the release. "We await as law enforcement continues to gather the facts regarding this ongoing situation. Right now, safety is the top priority for community members, participants, travelers, and event staff and volunteers."

Gallup is in northwestern New Mexico, a little more than a two-hour drive west of Albuquerque. It is home to the Navajo Regional Office Bureau of Indian Affairs.

"We are thankful that no lives were lost due to this senseless act by a few individuals. The perpetrators must be held accountable to the fullest extent. My family and I, as well as many of our Navajo people, witnessed the tragic events firsthand," Navajo Nation President Jonathan Nez said in a news release. "We saw children who were shedding tears and people shaking with fear and we did our best to comfort them and let them know that everything would be OK."

Navajo Nation Council Speaker Seth Damon released a statement saying, "The Navajo Nation stands with resilience against any acts of violence and sends prayers of protection to those affected. This was a traumatic and triggering event for many, especially for our youth, elders, and our veterans who acted quickly."

"Hold Gallup in your prayers tonight as we come together in faith and strength for one another. May the Creator and Holy People bless you all tonight as we move forward together," he said.