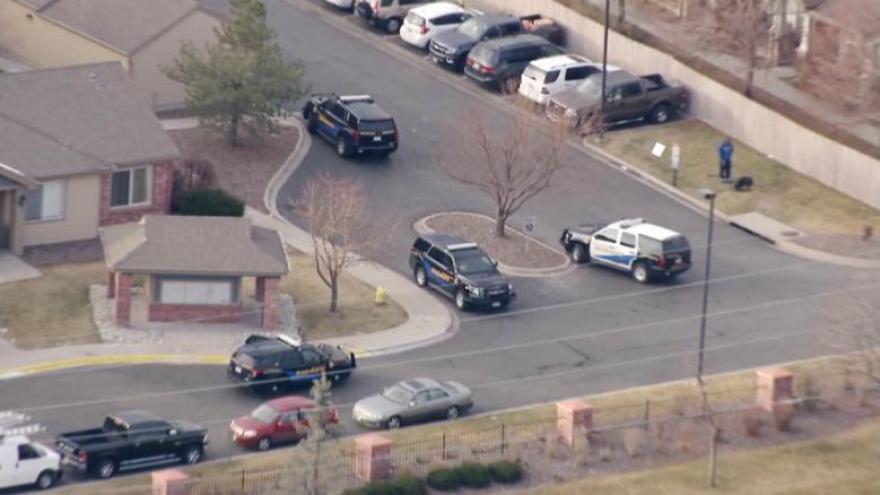 DENVER (AP) — A man fired more than 100 rounds at sheriff's deputies early Sunday, killing one and injuring four others, before being fatally shot himself in what authorities called an ambush. Two civilians were also injured.

The suspect was well-known to authorities but Spurlock declined to name him until his identity was confirmed. Authorities had left the home about four hours earlier to address a noise complaint and returned to in response to reports of a disturbance at the home.

"I do know that all of them were shot very, very quickly. They all went down almost within seconds of each other, so it was more of an ambush-type of attack on our officers," Spurlock said. "He knew we were coming and we obviously let him know that we were there."
The wounded deputies tried to pull the fallen officer, identified as Zack Parrish, out of the line of further gunfire but were unable to because of their own injuries and to "crawl to safety," Spurlock said.

Parrish, 29, a married father of two young children, had been with the department for about seven months. Spurlock called him a "good kid" who was eager to work.

"His wife told me today that he loved this job more than he had loved any job he ever had," the sheriff said.

The four injured officers, who range in age from 28 to 41, were in stable condition, and the two civilian injuries were not life-threatening.
Boulder County Sheriff Joe Pelle said his son, Douglas County sheriff's deputy Jeff Pelle, underwent surgery from injuries suffered in the attack and was recovering.

President Donald Trump expressed sorrow, writing on Twitter, "My deepest condolences to the victims of the terrible shooting in Douglas County @dcsheriff, and their families. We love our police and law enforcement - God Bless them all!"

The shooting occurred on the final day of a year that saw the deadliest mass shooting in modern U.S. history in Las Vegas.

DENVER (AP) — A sheriff’s deputy was killed and four others were wounded Sunday in a shooting in suburban Denver that capped a year of deadly attacks in the United States. Two civilians were also injured.

The shooting happened after deputies were called to the scene of a domestic disturbance in Highlands Ranch, the Douglas County Sheriff’s Office said on Twitter. The suspected gunman was also shot and is believed to be dead and “no longer a threat.”

Shots were fired in the course of the investigation at the Copper Canyon Apartments, a landscaped complex 16 miles (28 kilometers) south of Denver, the sheriff’s office said. Residents in the vicinity were advised to stay inside and avoid exterior walls and windows.

A hospital where three people were taken for treatment says those people suffered noncritical injuries. Another nearby hospital said it received four patients but wouldn’t release their conditions.

The shooting occurred on the final day of a year that saw the deadliest mass shooting in modern U.S. history in Las Vegas.

(CBS NEWS) -- The Douglas County Sheriff's Office (DCSO) in Colorado says "multiple deputies" responding to a domestic disturbance were injured after shots were fired. A code red alert was issued Sunday morning amid what the DCSO said was an "active" situation.

The DCSO says citizens should avoid the area, while residents should shelter in place and avoid windows and exterior walls.

The alert follows earlier reports of an officer down in the area, CBS Denver reports. The number of deputies down or the extent of possible injuries was not immediately known.

Footage from the scene showed a heavy police presence, with numerous ambulances and police cars with their lights flashing.