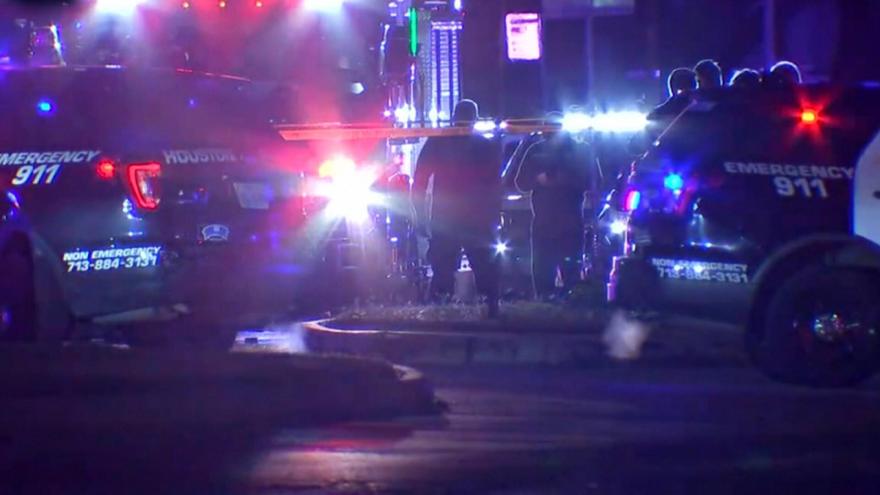 A Houston-area deputy was shot and killed during a traffic stop on Sunday, January 23.

(CNN) -- At least five law enforcement officers were seriously injured during traffic stops across America over the last week -- four by gunfire -- leading to the death of one sheriff's deputy.

A motorist dragged a Philadelphia police officer for five blocks while attempting to flee after the officer spotted a gun in the car. A man pulled over by a Houston-area deputy over the weekend shot the deputy to death. A man emerged from a garbage can and shot a Milwaukee County sheriff's deputy during a search for someone who fled a traffic stop. In Georgia, a sheriff's deputy was shot in the chest during a stop -- their vest stopped the round. And in California a deputy was shot and wounded by a passenger who had fled a traffic stop. The deputy returned fire, killing the passenger.

Law enforcement experts say the attacks this week highlight the risks inherent to the job of policing, even if they aren't evidence of a growing trend. Elsewhere, three officers were shot in Houston while trying to apprehend a carjacking suspect, and two were killed last week in New York responding to a domestic disturbance.

"Officers being shot and killed and seriously injured doing stops is nothing new, any more than officers responding to domestic violence calls being shot and killed. They're both considered statistically a high-risk category in what we do," said Thor Eells, executive director of the National Tactical Officers Association. "It's a tragedy, and it has been."

It can take weeks or months of incidents like this before it emerges as a trend in data sources, and because there are so few shootings of police officers relative to the number of people shot across the country, a single shooting with multiple officers as victims or a handful of assaults on officers can temporarily skew trend lines.

What's more, non-gunfire injuries are even more difficult to track, and not captured by any timely national data source. Those injuries are more routine and less likely to be surfaced by local and national news outlets and can be just as debilitating.

But more officers were killed last year while working than any other year since 1995, excluding the 9/11 attacks in 2001. Gunfire has consistently been the leading cause of felonious officer deaths each year, according to preliminary year-end data provided to CNN by the FBI.

The FBI has not released its full end-of-year breakdown but reported that 55 officers were killed by gunfire in 2021 through the end of November, up from 39 in the same time frame in both 2020 and 2019.

The 73 felonious deaths reported by the FBI in 2021 are a 59% increase from 2020's total of 46, breaking the previous high of 72 felonious killings in 2011. According to the FBI, at least eight police officers also lost their lives in premeditated, ambush-style attacks last year.

Eells said the reason traffic stops are dangerous is because of the "unknown" officers are approaching. There are some things that can lessen risk -- like positioning of a squad car or illuminating the inside of the stopped car -- but officers can't eliminate risk.

"I can't approach every call with gun drawn and be proning you out. We know that. For a lot of reasons, we can't do that. When you approach that car, gun's not out unless you have a really good reason," he said. "You're going to approach car as (if it's) a normally law-abiding citizen who, for whatever reason, committed a traffic violation ... tactically speaking, we're at a disadvantage. Most everything you're going to do is going to be reactive to the behavior of the person you're contacting. There's very little proactive (that) we can do."

Traffic stops are not without controversy. Black drivers are also more likely to be stopped by police, and in big cities, police are more likely to be assigned to Black communities with elevated rates of gun violence. Calls for change typically follow high-profile use of force by an officer during a stop for a minor violation that's escalated to a more serious crime by either a non-compliant motorist or new information that arises during the stop.

The attorney general in Virginia opened an investigation into a police department after a driver was pepper sprayed during a stop. Just outside Minneapolis, a jury convicted an officer of manslaughter after she mistook her gun for a Taser and shot to death Daunte Wright, who was trying to evade arrest on a warrant. In Ohio, critics expressed outrage over police officers dragging a Black paraplegic man out of his car during a traffic stop, though the officers involved were cleared of wrongdoing relating to the stop and use of force during the arrest.

Some advocates have called for ending the use of police officers for traffic enforcement. In Philadelphia, the city banned officers from doing traffic stops for some low-level offenses. The town outside Minneapolis where Wright was killed created an "unarmed traffic enforcement unit." But there has been widespread adoption of policies that take police officers out of enforcing traffic laws, or enforcing other laws during traffic stops.