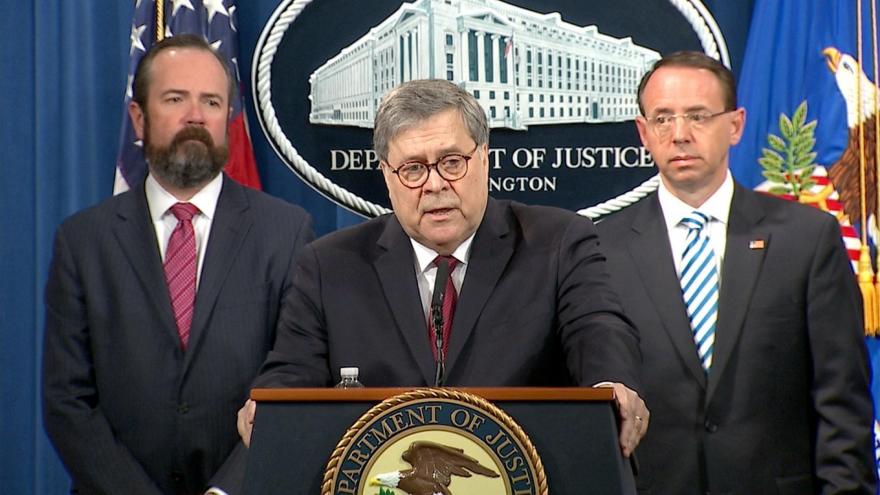 (CNN) -- Robert Mueller's investigation into possible obstruction of justice could not clear President Donald Trump, according to a redacted version of the special counsel's report released Thursday, which provided new details of Trump's efforts to influence the investigation into his campaign and Russia.

The report details numerous cases in which Trump asked his aides to take actions that would have obstructed the investigation, but stated they were unsuccessful because the aides refused his orders.

"The President's efforts to influence the investigation were mostly unsuccessful, but that is largely because the persons who surrounded the President declined to carry out orders or accede to his requests," Mueller says in the report.

Mueller also explains that the investigation into possible collusion found that members of the Trump campaign knew they would benefit from Russia's illegal actions to influence the election, but didn't take criminal steps to help.

The 448-page report, which includes two volumes and appendixes, paints a starkly different picture than the one laid out by Attorney General William Barr. On Thursday morning, before the report was released, Barr said that Mueller's investigation did not establish a conspiracy with the Russian government and that Mueller did not make a decision on obstruction. But the full report lays out a significantly more complicated picture as Mueller's team weighed whether to prosecute cases.

The report includes multiple episodes that were previously unknown, stemming from both the collusion and obstruction investigations, which are likely to fuel investigations in Congress into Trump. It's also likely to add to the wave of criticism Barr has faced from Democrats, who were infuriated that he held a press conference Thursday morning.

Mueller wrote he accepted the Justice Department opinion that a sitting President cannot be indicted. But the special counsel report rejected the Trump team's legal argument that a President cannot commit obstruction of justice, leaving the door open for Congress to continue to investigate Trump.

"With respect to whether the President can be found to have obstructed justice by exercising his powers under Article II of the Constitution, we concluded that Congress has the authority to prohibit a President's corrupt use of his authority in order to protect the integrity of the administration of justice," the report says.

House Judiciary Chairman Jerry Nadler, whose committee is investigating Trump, told reporters he thought it was "probably written with the intent of providing Congress a roadmap."

The investigation has clouded Trump's presidency for nearly two years, and Trump was clearly worried about the potential findings of Mueller, the former FBI director, the report shows.

In May 2017, after Trump learned of Mueller's appointment, Trump "slumped back in his chair and said, 'Oh my God. This is terrible. This is the end of my Presidency. I'm f*****.'"

Trump said Thursday that he was having a "good day."

Democrats, meanwhile, are seizing on the details in Mueller's report to slam Barr's summary of the investigation, accusing him of acting as a defense attorney for the President. They were particularly steamed over Barr's decision to hold a press conference.

But the report hasn't changed the calculus in the Democratic House leadership for starting impeachment proceedings.

"Based on what we have seen to date, going forward on impeachment is not worthwhile at this point," House Majority Leader Steny Hoyer told CNN Thursday. "Very frankly, there is an election in 18 months and the American people will make a judgment."

Democrats have demanded to see Mueller's full, unredacted report. Nadler said Thursday he would issue a subpoena for Mueller's report and underlying evidence, which his committee has already authorized.

Barr is set to testify on the report before the Senate and House Judiciary Committees on May 1 and 2, and Democrats are moving to bring in Mueller next month, too.

"We believe the only way to begin restoring public trust in the handling of the special counsel's investigation is for special counsel Mueller himself to provide public testimony in the House and Senate as soon as possible," House Speaker Nancy Pelosi and Senate Minority Leader Chuck Schumer said in a joint statement.

Both Nadler and House Intelligence Chairman Adam Schiff on Thursday formally invited Mueller to testify in May.

Democrats have been particularly suspicious at the fact that Barr and Deputy Attorney General Rod Rosenstein made the decision there was not sufficient evidence to prosecute an obstruction case.

Congress would eventually get to see a version of the report that only redacts grand jury material, Barr said, but Democrats have argued that's not sufficient and they need to see everything.

Episodes of potential obstruction by Trump

In his evaluation of whether Trump obstructed justice, Mueller looked at a number of issues and areas involving the President and his aides focused on whether they were attempting to curtail the investigation.

Those areas include: the Trump campaign's response to reports about Russian support for Trump and the President's conduct involving FBI Director James Comey and former national security adviser Michael Flynn.

Mueller's report says that after the election, "the President expressed concerns to advisers that reports of Russia's election interference might lead the public to question the legitimacy of his election."

The report says that on June 19, 2017, Trump met in the Oval Office with Lewandowski and dictated a message intended for then-Attorney General Jeff Sessions, who at that point had recused himself from matters involving the probe.

In the message, Sessions was told to publicly announce the investigation was "'very unfair' to the President, the President had done nothing wrong, and Sessions planned to meet with the special counsel and 'let [him] move forward with investigating election meddling for future elections.'" Lewandowski told Trump he understood his instructions.

Ultimately, Lewandowski declined to deliver the message personally, instead asking a senior White House official -- deputy chief of staff Rick Dearborn -- to do it instead. Mueller's report says Dearborn was "uncomfortable with the task and did not follow through."

Mueller did not make a "traditional prosecutorial judgment" on the obstruction question, Barr said. Instead, Barr said he concluded the evidence was "not sufficient to establish that the President committed an obstruction-of-justice offense."

"The President took no act that in fact deprived the special counsel of the documents and witnesses necessary to complete his investigation," Barr said.

But at the same time, Mueller wrote that the written responses submitted to the special counsel were "inadequate."

"We noted, among other things, that the President stated on more than 30 occasions that he 'does not 'recall' or 'remember' or have an 'independent recollection'' of information called for by the questions. Other answers were 'incomplete or imprecise,'" Mueller says.

But Mueller declined to subpoena the President because it would "delay" the investigation.

The special counsel believed it had the authority to subpoena Trump, but decided against doing so because it would delay the investigation, according to the report. The prosecutors also believed they already had a substantial amount of evidence.

"We made the decision in view of the substantial delay that such an investigative step would likely produce at a late stage in our investigation," the special counsel wrote in the report. "We had sufficient evidence to understand relevant events and to make certain assessments without the President's testimony."

On the collusion investigation, Mueller specifically stated Trump's presidential campaign "showed interest" in WikiLeaks' releases of emails that the Russians stole from the Democrats to hurt his 2016 opponent Hillary Clinton.

"Although the investigation established that the Russian government perceived it would benefit from a Trump presidency and worked to secure that outcome, and that the campaign expected it would benefit electorally from information stolen and released through Russian efforts, the investigation did not establish that members of the Trump campaign conspired or coordinated with the Russian government in the election interference activities," the report says.

Mueller looked at potential crimes outside of conspiracy as he investigated collusion -- including crimes under campaign finance law and regarding individuals potentially acting as illegal foreign agents for the Russian government. The probe examined a number of contacts between Russians and the Trump team, offering a big-picture overview of the interactions that occurred during the 2016 campaign.

"The Russian contacts consisted of business connections, offers of assistance to the campaign, invitations for candidate Trump and Putin to meet in person, invitations for campaign officials and representatives of the Russian government to meet, and policy positions seeking improved US-Russian relations," Mueller wrote.

Many of these contacts are already known. At least 16 Trump associates had Russian contacts during the campaign or transition, according to public statements, court filings, and reports from CNN and others. Some of the Trump aides lied about these contacts and were charged with lying to investigators.

But Mueller's report provided new details were about those contacts, too.

For instance, Mueller wrote that Donald Trump Jr. announced at a morning meeting of the top campaign members "that he had a lead on negative information about the Clinton Foundation" in the days before the June 2016 Trump Tower meeting.

Manafort, however, cautioned the group to be careful and raised doubts the upcoming meeting would actually yield vital information, Gates said.

Hicks later denied knowing about the meeting in advance, and Kushner said he did not recall the meeting coming up beforehand.

After Trump publicly asked Russia to hack Hillary Clinton's emails at a July 2016 press conference, he privately and repeatedly "asked individuals affiliated with his campaign to find the deleted Clinton emails," the report says.

They sent 15 email accounts connected to Clinton's campaign malicious links, Mueller says. This was only a small part of the broad effort the Russians made to hack the Democratic Party for damaging information.

One of the campaign people Trump asked was Flynn, who later told investigators that Trump repeatedly made the request, according to the report. Flynn then tried to get Clinton's emails and reached out to "multiple" associates -- including GOP operative Peter Smith, who died in 2017 and whose efforts to obtain the emails have been detailed in press accounts.

No prosecution of Trump Jr., Sessions

Mueller's team declined to prosecute Donald Trump, Jr., and members of the campaign, for campaign finance violations over their participation in the June 2016 meeting at Trump Tower, in part because they couldn't prove that they "willfully" violated the law.

"Taking into account the high burden to establish a culpable mental state in a campaign-finance prosecution and the difficulty in establishing the required valuation, the Office decided not to pursue criminal campaign-finance charges against Trump Jr. or other campaign officials for the events culminating in the June 9 meeting," the report states.

They also didn't go after then-Sen. Jeff Sessions for making false statements or committing perjury to Congress during his confirmation hearing for attorney general in part because of the inexact wording of the questions.

Sessions testified that he did not have communications with Russians during the campaign. It was later revealed Sessions interacted with Russian Ambassador Sergey Kislyak at the Republican National Convention in Cleveland and a campaign event at the Mayflower Hotel in Washington.

The report isn't the end of the legal process tied to the special counsel probe.

As part of the closing of the special counsel office, Mueller's team transferred 11 cases, including Trump confidant Roger Stone, Gates and Manafort after his sentencing, as well as two cases that are redacted because they are ongoing.

Mueller's team referred 14 investigations to other US attorney's offices, including the prosecution of Cohen and Greg Craig, the Skadden Arps attorney who was indicted for lying about work he had done for the Ukraine Ministry of Justice.

The other 12 investigations are redacted.