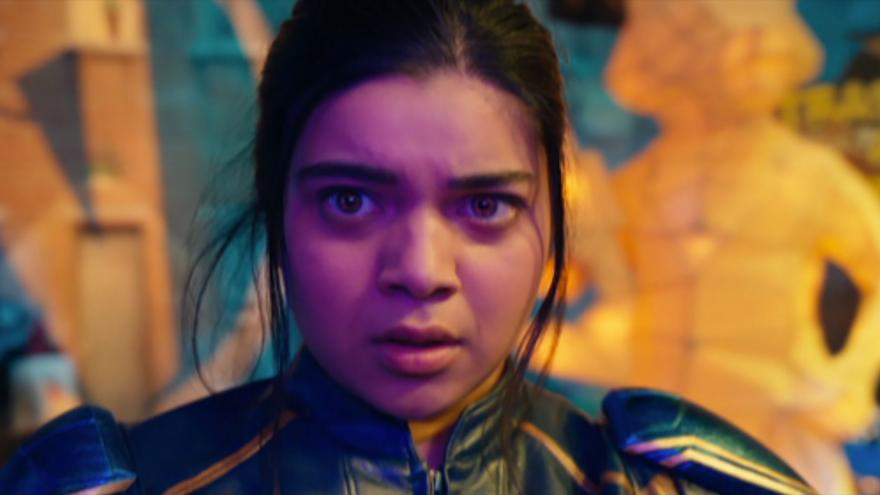 (CNN) -- Kamala Khan's Ms. Marvel, a beloved recent addition to the superhero comic canon, is joining the Marvel Cinematic Universe (MCU) this summer. And based on the trailer for her new self-titled Disney+ series, she's every bit as endearing and relatable as her comic iteration.

The new trailer for "Ms. Marvel," dotted with speech balloons straight out of a comic book, introduces viewers to Kamala, a Muslim, Pakistani-American high schooler from New Jersey who doodles and daydreams about one day joining the superheroes she idolizes. Kamala, who was introduced in comics in 2013 before getting her own series the following year, was Marvel's first Muslim-American superhero.

Though one day our teenage hero (played by Iman Vellani) will become one of Marvel's most powerful crime fighters, the series appears to serve as her origin story. The Kamala we meet encounters sniping classmates who mispronounce her name and poke fun at her Avengers T-shirt. She gawks at a shirtless boy at a party surrounded by equally awed friends. And, crucially, she envisions herself as a version of Captain Marvel, a cosmic-powered icon in the MCU.

That daydream is pure fantasy, until it isn't: The trailer doesn't show us just how Kamala gets her powers or their extent (no spoilers here) -- she describes them as "cosmic."

"It's not really the brown girls from Jersey City who save the world," Kamala says at one point in the trailer. But "Ms. Marvel" the series will likely prove her wrong.

What foes will Kamala face beyond high school mean girls and intimidatingly attractive classmates? Will her family learn her super-powered secret? And when will she get to join her idol Captain Marvel in defending Earth from interstellar invaders? (She's set to appear in the upcoming "Captain Marvel" sequel "The Marvels.")

The MCU loves a slow build, so it's likely neither Kamala nor the viewers will get every question answered. Marvel fans have likely already begun theorizing, but they'll have to wait until June 8, when the show starts streaming on Disney+, to see how Kamala's story plays out.