Mouth breathing might be ruining your sleep. Here's how to fix it 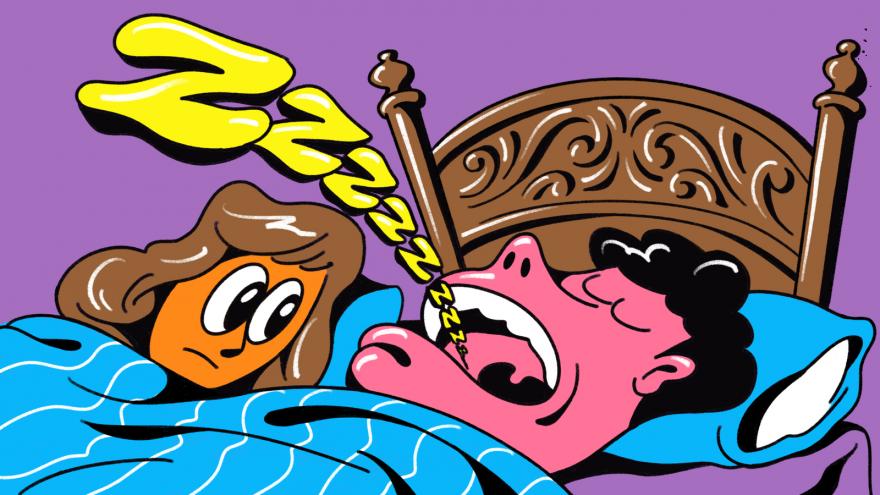 By Jen Rose Smith and illustrations by Max Pepper, CNN

(CNN) -- Living with a plugged nose isn't fun, but James Nestor was ready. Plus, it was for science.

While researching his recent book, "Breath: The New Science of a Lost Art," Nestor let Stanford University scientists block his nostrils with silicone and surgical tape to measure the impacts of breathing through his mouth for 10 days.

"We knew it wasn't going to be good, because there's a very firm scientific foundation showing all the deleterious effects of mouth breathing, from periodontal disease to metabolic disorders," Nestor said. The surprise was just how quickly the experiment affected him.

Nestor's blood pressure rose 13 points, edging the writer into stage one hypertension. Measurements of heart rate variability showed his body was in a state of stress. His pulse went up, and he stumbled around in a mental fog.

"We had no idea it was going to be that bad," Nestor said. "The snoring and sleep apnea was so dramatic, and it came on so quickly, that everyone was pretty floored."

What Nestor learned, aside from the hazards of being a research subject, was that mouth breathing can ruin a good night's sleep.

Breathing through your mouth at night puts you at higher risk for sleep disorders including snoring, sleep apnea and hypopnea, the partial blockage of air, scientists have found. Each of those, in turn, can lead to daytime fatigue.

That doesn't mean you're doomed to wake up in a daze because you're prone to mouth breathing when you sleep. Experts have a long list of strategies designed to turn you into a nasal breather — including a low-cost breathing hack you can pick up at the corner store.

There is a long list of reasons why people breathe through their mouths at night, said Dr. Steven Park, a surgeon with a specialty in sleep medicine, and the host of the podcast, "Breathe Better, Sleep Better, Live Better."

"The most common reason is if your nose is stuffy," Park said. "From allergies, or if you have a deviated septum. Lots of medications can also cause nasal congestion." 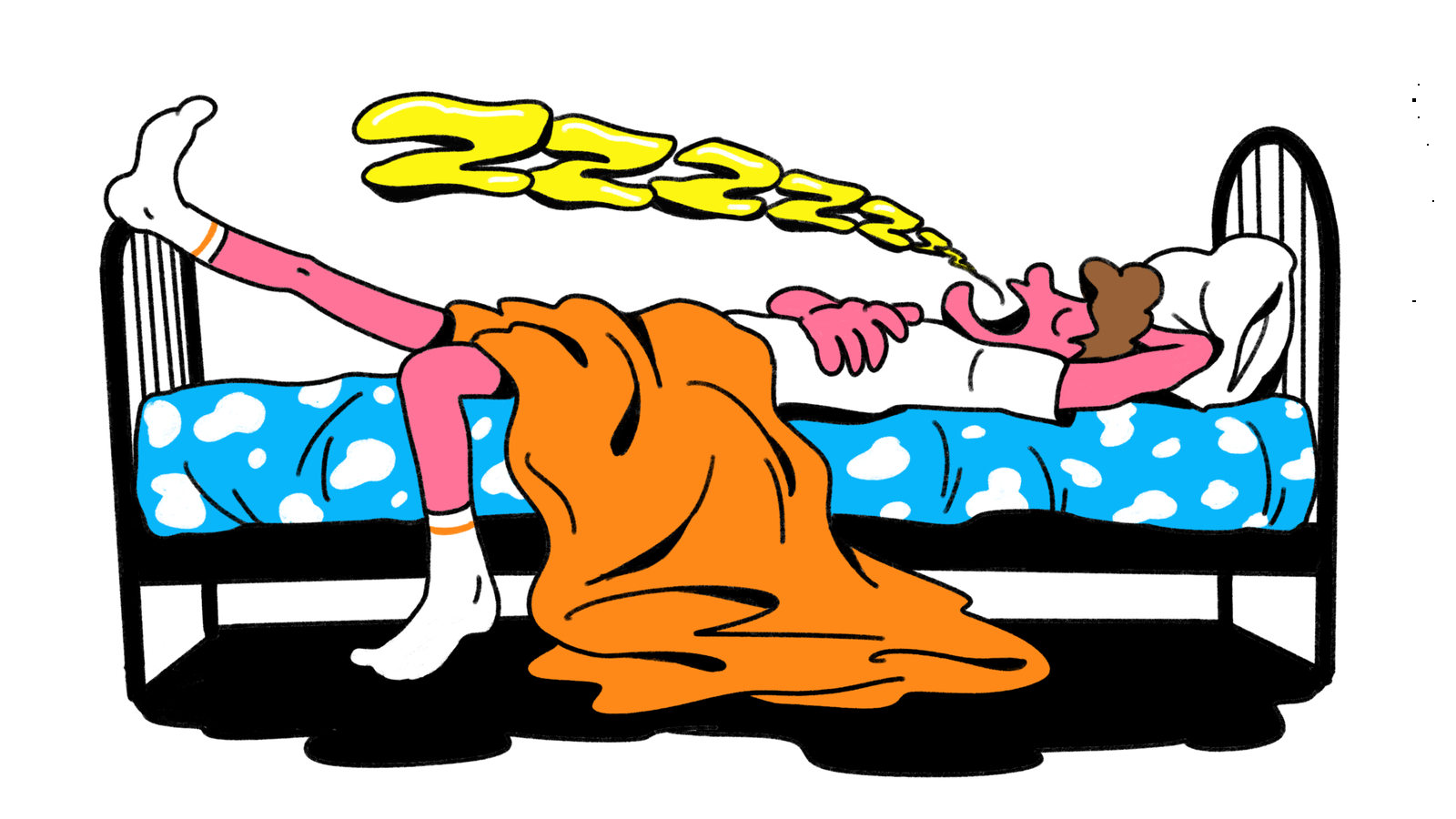 Those problems are aggravated by lying down, he explained.

"Generally when you lie down the blood vessels inside your nose fill up with blood," he said, explaining that the rush of blood causes swelling and constriction. If you can't breathe easily through your nose, you're likely to open your mouth for air, Park said. That triggers a positive feedback loop.

"You would think that if you open your mouth you would breathe better, but actually the reverse happens," he said. Opening your jaws causes the tongue to slump backward, obstructing your airway. "Even if you don't have sleep apnea, or you have mild sleep apnea, opening your mouth makes it much, much worse."

How do you know if you're mouth breathing at night? Many people, Park noted, are tipped off by a spouse or partner who notices that they're breathing through the mouth.

If you wake up with a dry mouth or lingering tiredness, they may be warning signs. Another indication of sleep apnea or other disturbed sleep is if you have to visit the bathroom multiple times in the night, said Park. Interrupted breathing stresses the heart, Park explained, triggering the release of hormones that cause you to produce more urine.

What can you do to fix it?

When Nestor blocked his nose for science, he experienced an extreme version of mouth breathing. But in retrospect, he realized he'd been waking up with a dry mouth for some time, a sign he'd been ditching nasal breathing for at least part of the night.

If you're tackling your nighttime mouth breathing, Park suggested you start by taking care of your nose to minimize congestion.

"Number one, avoid eating close to bedtime," he said. That's because stomach juices can come up into your nose, sinuses, ears and mouth, causing congestion and inflammation.

Park also recommended nasal saline irrigation, flushing the nose with salt water in a squeeze bottle or neti pot. "That's a mild decongestant, because the salt water draws out clear water from the membrane," he explained. (Over-the-counter decongestant sprays can cause habituation and rebound symptoms, and should be reserved for short-term use, according to Park.)

Breathing problems are so widespread that they've spurred a whole industry dedicated to opening your nose. Park said some people find relief from nasal strips, which open up the nose from the outside, or nasal dilators that expand air passages from within.

But even if you get your nose to clear, nighttime mouth breathing can be a hard habit to break. That's led some to seek out products that secure their lips closed at night, such as Somnifix or Snorless strips. YouTube videos about taping your mouth closed with specialized adhesive tape have racked up tens of thousands of views.

For Nestor, the secret to curing his own nighttime mouth breathing turned out to be simpler and less expensive.

"I'm a big fan of American entrepreneurialism, but I don't think you need a special tape to tape your mouth with," he said.

Subscribe to CNN's Sleep, But Better Newsletter: Want the best sleep of your life? Sign up for our newsletter series for helpful hints to achieve better sleep.

He picks up hypoallergenic micropore tape at the drugstore, where a roll can cost under a dollar. "Just a teeny little bit at the center of your lips. The point is not to inhibit airflow through your mouth, it's to train your jaw shut at night." (Nestor has a more detailed video on mouth taping featuring dentist Mark Burhenne on his YouTube channel.)

For the author, it's been life altering.

"I travel with [tape] whenever I travel, even when I go camping. I'm convinced it's a good thing, and I've talked to the experts who have told me the same," he said. "It's been a complete game changer."