Mourners left more than 1,300 basketballs outside the Staples Center in tribute to Kobe Bryant 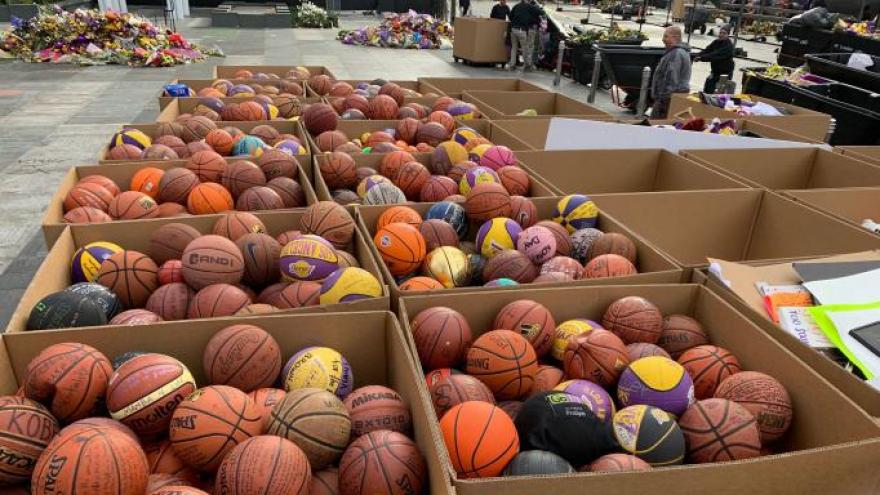 Some of the 1,353 basketballs left outside the Staples Center in Los Angeles as a tribute to Kobe Bryant.

(CNN) -- Cleanup of the makeshift Kobe Bryant memorial outside the Staples Center in Los Angeles began Monday at 4 a.m. local time, and the crew was busy. Fans of the late Lakers star had left more than 1,300 basketballs at the memorial in tribute.

Staples Center president Lee Zeidman shared on Twitter an image of some of the 1,353 basketballs -- many of them containing handwritten messages.

Bryant, his 13-year-old daughter Gianna and seven other people were killed in a helicopter crash near Los Angeles on January 26.

Fans left thousands of items at the memorial to pay their respects to Bryant and other victims of the crash. The items are being cataloged and will be delivered to the Bryant family at the request of Kobe's widow, Vanessa Bryant, Zeidman said.

"It will have been a week," Zeidman told the LA Times. "We have contractually obligated events that are moving in (to the arena). Vanessa had reached out to us and said, 'Our family would like the items out there.' So we're going to catalog every one of them. By that I mean T-shirts, letters, basketballs, stuffed animals, toys. We're going to put those in specially made containers and we're going to ship them to the family."

The cleanup crew also filled a 40-yard trash bin with flowers, which will be used as mulch and spread throughout the landscaping around the arena, according to Zeidman.

Zeidman told the LA Times he got the idea to compost the flowers from England's Manchester Arena, which composted flowers and perishables left in the days after a terrorist attack at an Ariana Grande concert in 2017.