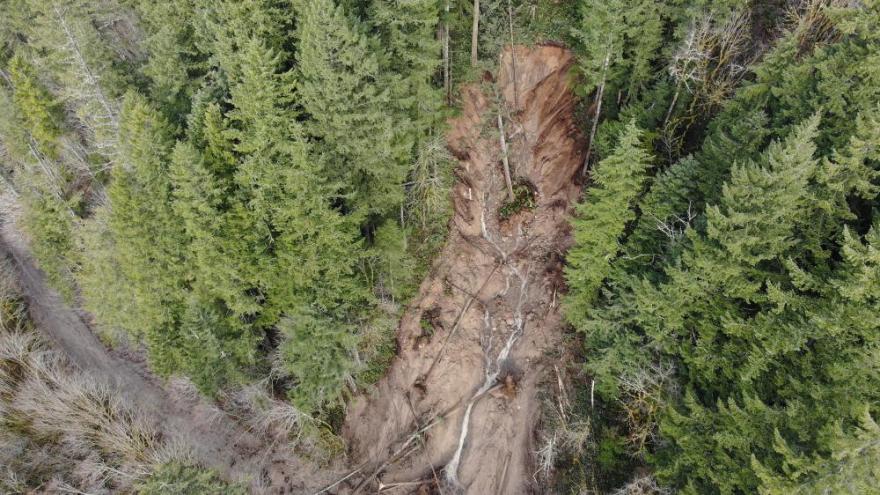 An aerial view of the debris blocking access to the park.

Roads leading to the park will remain closed until they can be cleared of water and debris and stabilized, officials with the Washington State Department of Transportation and National Park Service said.

"We aren't doing anything up there until we can get the water stopped," said transportation department spokesperson Doug Adamson. "We have an extreme danger above the highway and it's turned the roadway into a riverbed."

A "Pineapple Express" blew through the area Thursday, triggering several mudslides and covering the forest service road above a state highway in debris, Adamson said.

This kind of storm builds moisture in the tropical Pacific and pummels the West Coasts of the US and Canada with heavy rainfall and snow, according to the National Oceanic and Atmospheric Administration.

The state's DOT said it is unclear when the highway will reopen.

The department is working to shore up the highway, and state engineers worry that the slope over the highway is unstable and could cause additional mudslides.

"We want to reopen the highway as soon as possible, but the slope continues to move and is very unstable," said WSDOT assistant region administrator Troy Cowan. "Removing debris from the highway that's up to 6 feet deep in places, plus strong ongoing running water, may trigger additional slides that could put lives -- both of crews and travelers -- in danger."

There is no access to the Paradise and Longmire areas to the south of the park, but NPS said it has cleared out an emergency access route to evacuate guests and remaining staff from Longmire, according to the release.

To the north of the park, four mudslides have shutdown SR 410. Teams are working to determine the safety of the highway, DOT spokesperson Joe Calabro said.