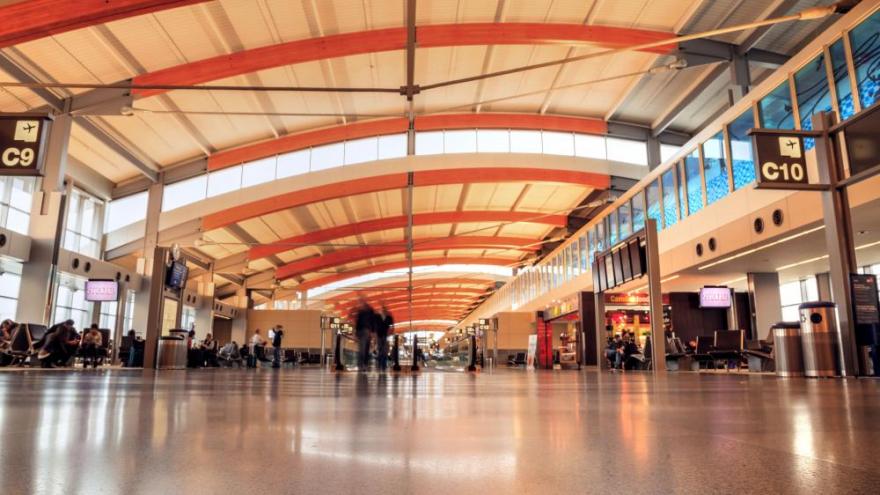 Kimberly Erway sues the Transportation Security Administration and an agency supervisor for a May 2019 incident involving her transgender teenager, Jamii Erway who was asked to undergo a strip search at Raleigh-Durham International Airport.

(CNN) -- A North Carolina mother is suing the Transportation Security Administration and an agency supervisor for a May 2019 incident involving her transgender teenager who was asked to undergo a strip search at an airport.

According to a complaint filed Monday, Kimberly Erway and her 15-year-old daughter, Jamii Erway, were flying out of Raleigh-Durham International Airport in May 2019. When Jamii went through the TSA body scanner, it indicated a "false positive," according to the complaint.

TSA's transgender passenger webpage states "the TSA officer presses a button designating a gender (male/female) based on how you present yourself" when entering the scanner.

"This lets the body scanner know what to expect," said the complaint.

The TSA webpage says "the machine has software that looks at the anatomy of men and women differently. The equipment conducts a scan and indicates areas on the body warranting further inspection if necessary."

According to the lawsuit, "Jamii frequently has to deal with false positives when she flies" and the agency "receives complaints from transgender individuals regarding" the issue regularly.

"False-positives on body scanners are a common occurrence; upon information and belief, at least 20% of TSA body scans indicate an anomaly even though the traveler is not secreting any items on their person," said the complaint.

The teen told the body scanner operator she was transgender and asked for a re-scan with "other button" pressed, but the employee refused and called a supervisor, according to the complaint.

The supervisor, identified as Jane Doe in the lawsuit, told Jamii she needed to be strip searched in a nearby private room and wouldn't be allowed to leave the checkpoint area until she complied, according to the lawsuit.

The complaint says "TSA procedure for resolving such anomalies is to conduct a brief pat-down search."

The TSA supervisor directed "Kimberly to force Jamii to submit to the strip-search" and when she declined, "Doe (then) summoned a police officer," the complaint alleges.

According to the lawsuit, the police officer said he would not assist in detaining the teen and the two were then allowed to leave the checkpoint. The Erways rented a car and drove 600 miles to their home, the complaint said.

The lawsuit seeks unspecified compensatory and punitive damages due to intentional infliction of emotional distress and violation of Jamii's Fourth Amendment rights against unreasonable searches.

A TSA spokesperson declined to comment on the case, citing the pending litigation.

TSA's website says the agency "recognizes the concerns that some members of the transgender community may have with certain security screening procedures at the nation's security checkpoints. TSA is committed to ensuring all travelers are treated with respect and courtesy. Screening is conducted without regard to a person's race, color, sex, gender identity, national origin, religion or disability."