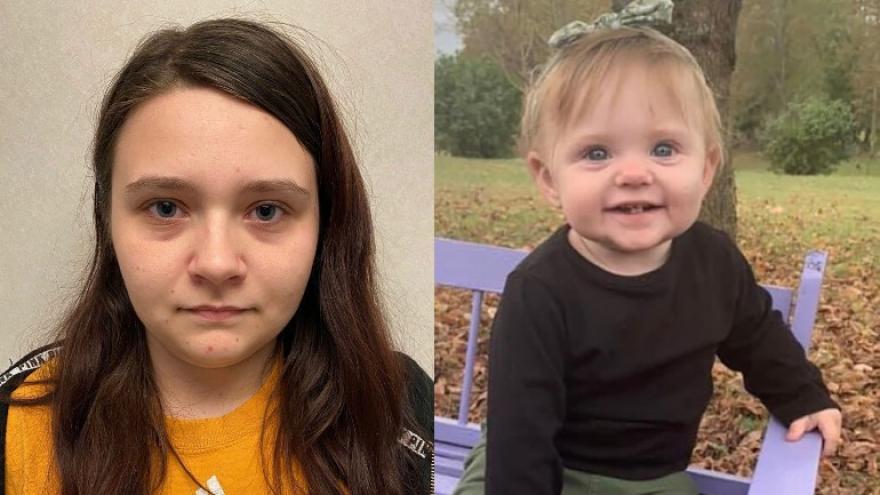 Angela Boswell, 42, the baby's grandmother, and William McCloud, 33, were arrested last week in connection to the case

(CNN) -- The mother of a Tennessee toddler missing for two months was arrested on Tuesday after giving investigators false information, police said.

Boswell has been charged with one count of false reports, he said.

Her daughter, 15-month-old Evelyn Boswell, was last seen two months ago and was reported missing last week by her grandfather.

"Every time we talk to her, her story changes. I'm serious when I say that," Cassidy said. "Every single time."

Investigators on Wednesday searched a pond in Wilkes County, North Carolina, in connection with Evelyn's disappearance, but the search was "inconclusive," the Wilkes County Sheriff's Office said in a statement.

At a news conference last week, Cassidy said he believed Evelyn hadn't been seen since early December, when a babysitter last reported seeing the child.

"We want to know why the child was not reported missing earlier," Seabolt had said in a separate statement.

In a Facebook message, Boswell told CNN affiliate WJHL she is pregnant and therefore unable to take a polygraph test.

But the sheriff's office said it doesn't use polygraph tests.

"No one asked her to come take a polygraph examination," Seabolt said Tuesday.

In a statement to CNN, Tennessee Bureau of Investigation spokesman Josh Devine said Boswell wasn't scheduled to meet with a polygraph examiner from the bureau either.

Boswell, who did not return CNN's request for comment, had previously spoken to the affiliate after her daughter went missing saying she had told authorities where to find Evelyn.

"My mom took her to a campground in a silver camper and if they don't go tonight, I'm going to go find her myself," she told the news station Monday. When asked about the investigators' claims that she gave conflicting stories, she said she was trying to protect her mom.

Boswell has sole custody of Evelyn, while the baby's father is an active-duty military serviceman stationed in Louisiana, officials have said.

The last time she saw her daughter was a little before Christmas, Boswell told the affiliate. She said her mom was going to babysit Evelyn because she had work.

Angela Boswell -- the baby's grandmother -- was arrested last week in North Carolina along with William McCloud. They were found traveling in a gray 2007 BMW authorities had previously said they were looking for because its occupants were believed to have information about the toddler's whereabouts.

Boswell remains in custody in Wilkes County without bond and will be extradited back to Tennessee to face charges there, according to the Wilkes County Sheriff's Office.

McCloud was extradited to Tennessee on Wednesday, the sheriff's office said.