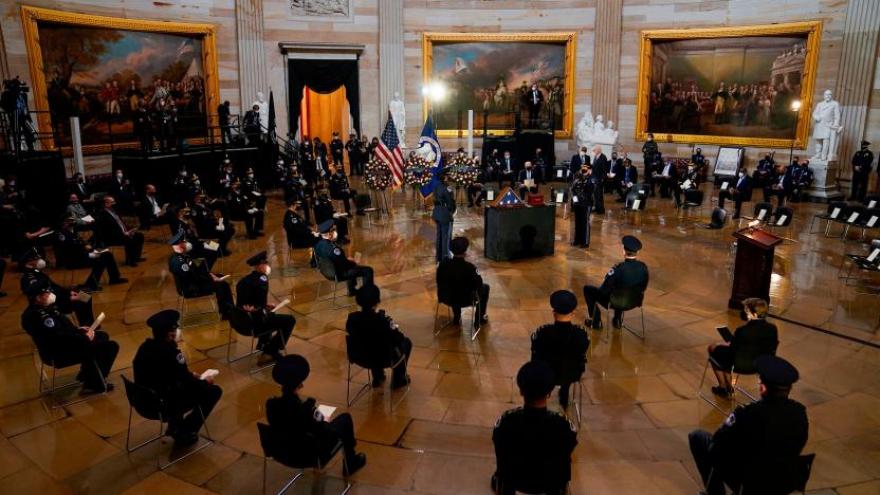 The mother of fallen US Capitol Police Officer Brian Sicknick is asking to meet with GOP senators Thursday. In this image, Brian Sicknick lays in honor in the Rotunda of the US Capitol building on February 3, in Washington, DC.

(CNN) -- The mother of fallen US Capitol Police Officer Brian Sicknick met with more than a dozen Republican senators Thursday, urging them to vote to establish a commission to investigate the January 6 insurrection. But even after those meetings, which two sources familiar said were cordial, most of the senators told her they wouldn't be changing their minds, likely leaving the commission short of the 10 Republican votes needed to pass.

Most GOP senators made it clear to Gladys Sicknick, her son's girlfriend Sandra Garza, Capitol Hill Police Officer Harry Dunn and DC Metropolitan Police Officer Michael Fanone that they don't want a commission to investigate what happened that day, underscoring the deeply partisan divide that has emerged over the insurrection and once again illuminating the GOP's fealty to former President Donald Trump.

Earlier in the day, Sicknick had told reporters that she hoped her meetings would sway Republicans.

"I hope so. I hope so. Brian had a work ethic second to none. He was just there for our country," she said. "He just was doing his job and he got caught up in it. And it's very sad."

"This is why I'm here today," she added. "Usually I'm staying in the background, and I just couldn't stay quiet anymore."

But the meetings, according to a source familiar with them, were "very hard" for Sicknick, who -- along with Garza -- wore a necklace with some of her son's ashes in them.

The source said it's hard for Sicknick to understand why most Republicans aren't voting for the commission, and at one point she said, "How can they not be doing the right thing?"

Thirteen Republican senators had declined to meet with her, according to a source with knowledge.

Only three senators -- Mitt Romney of Utah, Susan Collins of Maine and Lisa Murkowski of Alaska -- have expressed support for advancing the bill, while the vast majority of the 50 Senate Republicans are expected to oppose it. Collins said she would vote for a procedural motion to begin debate on the legislation to be able to offer an amendment to make changes to the bill, according to her spokeswoman Annie Clark.

Sicknick's meetings with those three senators were "very helpful because they knew someone is fighting for them," the source familiar with the meetings added.

Garza said she was "thankful" for Romney and his support after meeting with him.

"We just don't want other people to get harmed or for this to happen again," she said, later adding that members who are considering voting against the legislation should "look at the footage of what happened. It's very obvious it wasn't a peaceful day."

But not all the meetings went as well.

There were some sparks at the meeting with Sen. Ron Johnson, a Wisconsin Republican who has played down the insurrection and called it a "peaceful protest," according to the two sources familiar. The family immediately addressed those comments with the senator, while Fanone "let him have it," the sources said. Fanone himself was brutally assaulted while defending the Capitol on January 6.

After his own meeting with the group, South Carolina Sen. Lindsey Graham -- who opposes the creation of the commission -- suggested that the two officers testify before the Senate Rules Committee about January 6.

"I oppose the House-passed bill as I believe the Commission approach will turn into a partisan food fight," the South Carolina Republican said in a statement. "But I will suggest that the testimony of the two officers and others be captured to dispel any notion that what happened on January 6th was anything other than a violent, vicious attack on the Capitol."

Sicknick had requested the meetings with senators in a statement obtained by CNN ahead of Thursday's anticipated vote in the Senate. The measure passed in the House last week, with 35 Republican members voting for the commission. Senate Minority Leader Mitch McConnell, a Kentucky Republican, announced last week he would oppose the bill creating the commission, describing it as overly partisan and unnecessary given preexisting investigations into the riot.

"My son, Capitol Police Officer, Brian Sicknick, died on January 7, 2021. He died because of the insurrectionists who stormed the Capitol Building on January 6," Sicknick wrote in her letter to senators.

"He and his fellow officers fought for hours and hours against those animals who were trying to take over the Capitol Building and our Democracy, as we know it. While they were fighting, congressmen and senators were locking themselves inside their offices. According to some who were barricaded in their offices said it looked like tourists walking through the Capitol. Really?"

Sicknick noted that her son died and that many other officers were wounded in the attack, writing, "Not having a January 6 Commission to look into exactly what occurred is a slap in the faces of all the officers who did their jobs that day."

According to a source with knowledge, the other Republicans who had agreed to meet with her as of Wednesday evening were Sens. Bill Cassidy of Louisiana, John Barrasso of Wyoming, Mike Braun of Indiana, Mike Crapo of Idaho, Ted Cruz of Texas, Mike Lee of Utah, Roger Marshall of Kansas, Rob Portman of Ohio, and Steve Daines of Montana, who had planned to speak to her by phone.

Romney told CNN on Capitol Hill on Wednesday that blocking the bill would reflect "not well" on the GOP.

"I think the perception is on the part of the public that the January 6 Commission just trying to get to the truth of what happened, and that Republicans would be seen as not wanting to let the truth come out," he told CNN. "I don't believe that's what's the motivation but I think that's the perception.

The Justice Department hasn't linked Sicknick's death a day after the riot to the attack, and a medical examiner ruled last month he died of strokes, deemed to be natural causes. Still, police body-camera and surveillance video released late last month showed a chemical spray assault of Sicknick and others during the riot. The Justice Department has charged at least 400 people in connection with the January 6 insurrection at the US Capitol, according to a CNN review of court documents last month.

This story has been updated with additional developments and reaction.