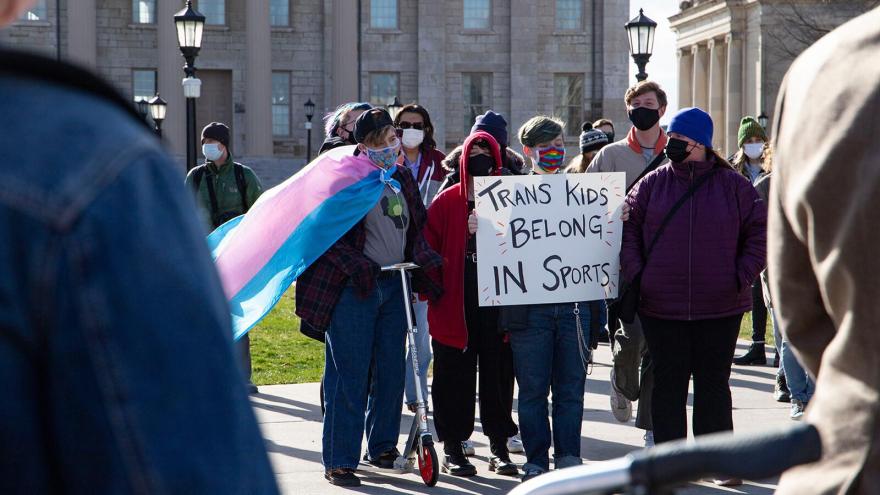 An attendee holds a sign reading "Trans kids belong in sports," at the Transgender Day of Visibility Rally in March in Iowa City, Iowa.

(CNN) -- When it comes to support for transgender Americans, respondents to a recent Gallup poll were divided: The majority said they support trans Americans' right to serve in the military, but most of them also said trans athletes shouldn't play on teams that align with their gender identity.

The divided results come from the polling firm's annual Values and Beliefs survey, conducted earlier this month, and they reflect the debates taking place in state legislatures across the country over trans rights (in particular, the rights of trans athletes to play sports that align with their gender identity).

Gallup asked more than 1,000 respondents three questions: Whether they favor or oppose openly trans people serving in the military, whether trans athletes should be allowed to play sports that match their gender identity and whether they know someone who is trans.

About 66% of respondents said they support allowing trans military service members, down from 71% the last time the question was asked in a 2019 poll, according to Gallup.

Support was lower for trans student athletes playing on a team that matches their gender identity, which may or may not align with the sex they were assigned at birth. Just over one-third of respondents, about 34%, said trans kids should be able to play on teams that align with their identity.

Around 62% of respondents said trans athletes should only be allowed to play on teams that match their gender assigned at birth rather than their gender identity.

About 31% of those polled said they knew someone who's transgender. The percentage was highest among adults ages 18 to 29 -- about 50% of respondents in that age group know someone trans, according to Gallup.

People who said they had trans people in their lives were also more likely to support a trans athlete playing on the team of their gender identity -- about 40% of people with trans connections supported gender-aligning sports, as opposed to 31% among people who did not know a trans person.

Andy Marra, executive director of the Transgender Legal Defense & Education Fund, said the findings reflect the "effects of a massive misinformation campaign" led by organizations and lawmakers behind the massive surge in bills that target transgender Americans.

As of mid-April, more than 100 anti-trans bills have been introduced in at least 33 states this year, some of which target trans student athletes. Others would restrict access to gender-affirming health care and school restrooms that align with a trans student's gender, CNN previously reported.

"Transgender students simply want to play sports, spend time with their friends and be part of the team," said Marra, who was not involved with the survey. "Across the country, transgender young people are seeing their lives come under attack and are feeling increasingly unwelcome and unsafe."

Jennifer Pizer, senior counsel and director of Law and Policy at the LGBTQ legal nonprofit Lambda Legal, said the differences in support for trans military service members versus trans athletes comes down to public education. Discourse about the inclusion of trans people in the military has continued for decades -- until 2016, the US military banned trans service members, and former President Donald Trump resumed that ban in 2019 (President Joe Biden lifted the ban earlier this year). But the conversation around trans athletes participating in sports that align with their gender identity is much newer, she said.

"When any minority group has stayed largely out of public view to reduce the impact of social stigma and discrimination ... the society at large has limited opportunities to get to know them," she said.

The anti-transgender sentiment expressed in the new bills likely influenced the way the respondents answered the survey, she said.